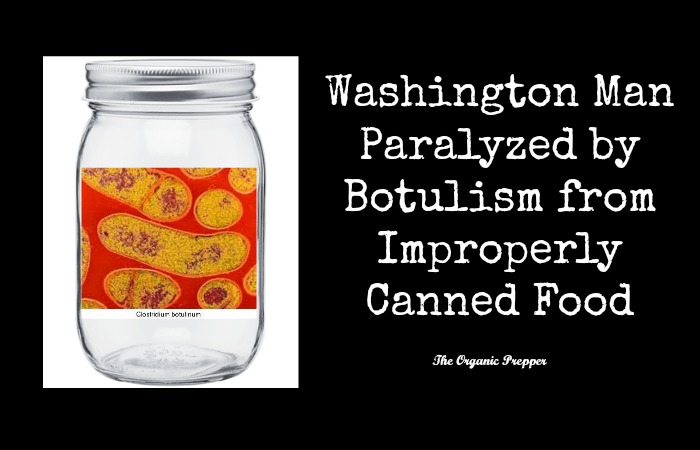 Home canning is a great way to preserve food. It’s an old-fashioned skill that has undergone a lot of research, resulting in modern updates.

Sometimes people are resistant to these updates. When I recently published my book, The Prepper’s Canning Guide, I can’t tell you how many emails I received telling me, for example, that a pressure canner isn’t necessary. That the reader’s grandma used a water bath canner for everything and she lived to the ripe old age of 114. That by my adherence to the guidelines set forth by the USDA, I’m “selling out” and kowtowing to the government. One person even wrote that he “used to read my website but no longer would” since my book followed the USDA recommendations for canning.

There’s a very good reason that I adhere to those guidelines. To do otherwise could be deadly.

A Washington state man, attorney Mike O’Connell, learned this lesson the hard way recently, when he ended up in the emergency room with all of the symptoms of a stroke-in-progress. He was dizzy. His legs were so rubbery they would hardly hold him up.  He was experiencing double vision.

But the tests came back negative for stroke and the hospital staff sent O’Connell home.

Over the next two days, his condition worsened. Added symptoms included drooping eyelids, slurred speech, difficulty swallowing, and extreme weakness. When his daughter arrived to visit, she was horrified to see his breathing was shallow. She called a friend who was a neurosurgeon, who gave her a checklist that included the food-borne illness, botulism.

The CDC’s page on botulism says:

Botulism is a rare but serious paralytic illness caused by a nerve toxin that is produced by the bacterium Clostridium botulinum and sometimes by strains ofClostridium butyricum and Clostridium baratii.  Foodborne botulism is caused by eating foods that contain the botulinum toxin. All forms of botulism can be fatal and are considered medical emergencies.

Clostridium botulinum is the name of a group of bacteria. They can be found in soil. These rod-shaped organisms grow best in low oxygen conditions. The bacteria form spores which allow them to survive in a dormant state until exposed to conditions that can support their growth.The classic symptoms of botulism include double vision, blurred vision, drooping eyelids, slurred speech, difficulty swallowing, dry mouth, and muscle weakness. Infants with botulism appear lethargic, feed poorly, are constipated, and have a weak cry and poor muscle tone. These are all symptoms of the muscle paralysis caused by the bacterial toxin. If untreated, these symptoms may progress to cause paralysis of the respiratory muscles, arms, legs, and trunk. In foodborne botulism, symptoms generally begin 18 to 36 hours after eating a contaminated food, but they can occur as early as 6 hours or as late as 10 days.

The classic symptoms of botulism include double vision, blurred vision, drooping eyelids, slurred speech, difficulty swallowing, dry mouth, and muscle weakness. Infants with botulism appear lethargic, feed poorly, are constipated, and have a weak cry and poor muscle tone. These are all symptoms of the muscle paralysis caused by the bacterial toxin. If untreated, these symptoms may progress to cause paralysis of the respiratory muscles, arms, legs, and trunk. In foodborne botulism, symptoms generally begin 18 to 36 hours after eating a contaminated food, but they can occur as early as 6 hours or as late as 10 days.

O’Connell’s daughter rushed him back to the hospital and told staff of her suspicions. They treated him with anti-toxin from the CDC.

In this day and age, the question was, how on earth did a Washington attorney end up with such a rare form of food poisoning?

O’Connell had the answer to that. He had taken shortcuts when canning some elk meat.  KPLU News in Seattle reported:

…The night before O’Connell woke up with double vision, he had eaten some elk meat from a hunting trip. He canned it himself about a week earlier.

O’Connell’s mother had canned everything when he was a kid. He wanted to recapture a bit of his childhood. But things started going wrong from the start.

I had way too much meat to deal with,” said O’Connell.

The pressure cooker was too small. O’Connell had already browned the meat in a cast iron pan. So he decided to shortcut the process. Once the jars sealed airtight he would take them out of the pressure cooker and start a new batch. The next day, he heard a pop in the pantry.

“Which I remember as a child was the signal for you’ve lost the seal,” said O’Connell.

“This time, it didn’t work out,” O’Connell said.

O’Connell had an upset stomach in the night, but he didn’t connect it to having eaten the meat. He says growing up, he didn’t know anyone who got food poisoning from home canned foods.

So you know those people who say,”I’ve never heard of anyone getting botulism from home-canned food. That’s just a scare tactic from the USDA.” Well, you can tell them about Mr. O’Connell, who still hasn’t fully recovered from his bout with unsafely preserved food. In fact, he may never completely recover.

Despite the administration of the anti-toxin, O’Connell became paralyzed.  After extensive rehab, he can now walk with the aid of a cane. His sense of taste is gone and may never return. His vision is finally back to normal.

Let me be as clear as possible. THERE ARE NO SHORT CUTS IN CANNING. You have to do things properly, adhering to tested methods that result the safest possible product. Would you risk the above scenario happening to your child, all because you don’t want to use a pressure canner? It’s really not difficult at all. The Prepper’s Canning Guide provides simple, step-by-step instructions that will walk you through the methods of making your home-preserved food as safe as possible.

We have the equipment available to make things far safer than Grandma did. The refusal to use it would be like refusing to put your infant in a car seat or refusing to ask your toddler to buckle up in the car. We know these things are safe, so we do them, despite the fact that most of us survived many a car ride standing on the center armrest of the front seat, gleefully watching the road ahead while keeping one hand on the parent beside us for balance.

I strongly encourage home preservation of food. It’s simple, inexpensive, and fun. Just do it safely, follow instructions,  and remember, THERE ARE NO ACCEPTABLE SHORTCUTS IN CANNING. Just because your great grandmother didn’t die from botulism, it doesn’t mean you or your loved ones won’t. It’s simply not worth the risk.