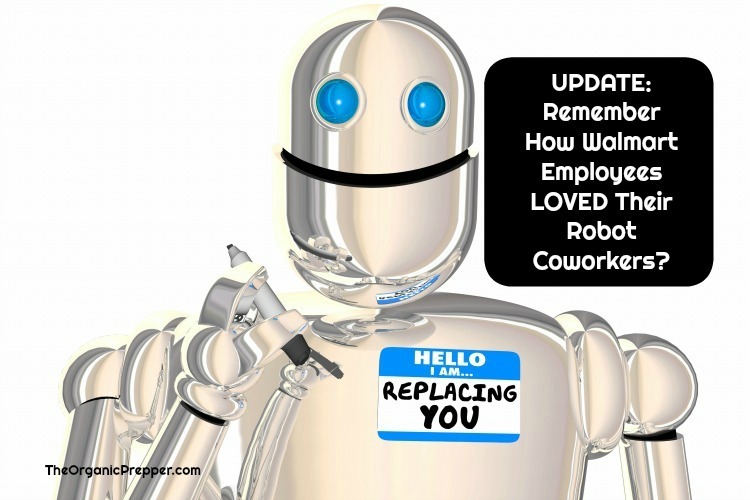 A couple of months ago, we reported that Walmart was beginning to use robots to carry out mundane tasks like mopping its floors and tracking inventory.

Last year, the company raised wages and is using the robots in more than 1,500 of its stores in an effort to cut down on labor costs. Robots “stealing” jobs should not surprise anyone – as more people demand a higher minimum wage, more jobs will be eliminated or replaced by machines…but I digress.

Back in April, Zero Hedge reported:

Walmart, which is the largest employer in the US, said at least 300 stores will introduce machines that scan shelves for out-of-stock products. Meanwhile, so-called “autonomous floor scrubbers” will be deployed in 1,500 stores, and conveyor belts that automatically scan and sort products as they are loaded off of trucks will more than double to 1,200. Another 900 stores will install 16-foot-high towers that will allow customers to pick up their online grocery orders without interacting with humans. (source)

Also back in April, we reported that the higher-ups at the company claimed employees are happy about their AI coworkers:

Naturally, the mega-retailer wants us to believe that robots taking over certain tasks in their stores is a good thing – a change that will allegedly benefit their human employees. “With automation, we are able to take away some of the tasks that associates don’t enjoy doing,” Mark Propes, senior director of central operations for Walmart US, told The Wall Street Journal. “At the same time, we continue to open up new jobs in other things in the store.”

In a press release titled #SquadGoals: How Automated Assistants are Helping Us Work Smarter, Walmart refers to the robots as “smart assistants” and claims that the response from associates has been “overwhelmingly positive” so far:

“Our associates immediately understood the opportunity for the new technology to free them up from focusing on tasks that are repeatable, predictable and manual,“ said John Crecelius, senior vice president of Central Operations for Walmart U.S. “It allows them time to focus more on selling merchandise and serving customers, which they tell us have always been the most exciting parts of working in retail.”

Yeah, about that “overwhelmingly positive” response from human Walmart employees…it looks like they aren’t so fond of their AI associates after all.

According to a new report from The Washington Post, many Walmart employees are finding the robots difficult to deal with:

To Walmart executives, the Auto-C self-driving floor scrubber is the future of retail automation — a multimillion-dollar bet that advanced robots will optimize operations, cut costs and revolutionize the American superstore.

But to the workers of Walmart Supercenter No. 937 in Marietta, Ga., the machine has a different label: “Freddy,” named for a janitor the store let go shortly before the Auto-C rolled to life.

Freddy’s career at the store has gotten off to a rocky start. Workers there said it has suffered nervous breakdowns, needed regular retraining sessions and taken weird detours from its programmed rounds.

Shoppers are not quite sure how to interact with Freddy, either. Evan Tanner, who works there, recalled the night he says a man fell asleep on top of the machine as it whirred obediently down a toy aisle.

Walmart executives said they are skeptical that happened, because the Auto-C is designed to stop if someone interferes with its work. But Tanner insists Freddy dutifully stuck to the job at hand. “Someone had to pull [the sleeping man] off,” he said. Freddy “was going to swing toward groceries, just cleaning away.” (source)

Some employees feel they are training their replacements.

“Their jobs, some workers said, have never felt more robotic. By incentivizing hyper-efficiency, the machines have deprived the employees of tasks they used to find enjoyable. Some also feel like their most important assignment now is to train and babysit their often inscrutable robot colleagues,” the report says.

Sometimes the robots are charming and helpful, the employees said. But others said the machines had “accelerated” the pace of work and spoke of having to respond to the robots’ nagging alerts. When the AI senses a problem, it sends an alert to the handheld devices most Walmart workers are expected to carry to let them know it is time to gather the carts or replenish the shelves. Human employees are the ones who do the physical work, and some say that feels demeaning. Others say they feel as if they are training their replacements, but also tending to them when things go wrong:

The self-driving floor scrubbers, for instance, must be manually driven until they learn the store’s layout — and when the aisles are shifted around, as is common during seasonal displays and remodels, the machines must be retrained.

Technical glitches, surprise breakdowns and human resentment are commonplace. Some workers said they have cursed the robots out using their employee-given nicknames, such as “Emma,” “Bender” and “Fran.” (source)

Some said they feel the company doesn’t value their own work:

Many Walmart workers said they had long feared robots would one day take their jobs. But they had not expected this strange transition era in which they are working alongside machines that can be as brittle, clumsy and easily baffled by the messy realities of big-box retail as a human worker can be.

Many Walmart customers aren’t big fans of the robot employees either.

Employees have reported that some customers don’t really know how to act around the robot employees, and some have acted aggressively against the machines:

Customers, too, have found coexisting with machines to be confusing, if not alarming. Some shoppers have been spooked, for example, by the Auto-S scanner, which stands six feet tall and quietly creeps down the aisles, searching for out-of-place items by sweeping shelves with a beam of light. Other shoppers, store workers said, have made a game of kicking the things.

Walmart workers said they have seen people following the robots around, recording them, talking to them, slapping their emergency-stop buttons, jumping in their way suddenly — and, yes, assaulting them with kicks and shoves.

Other customers find their time with the robots to be unsatisfying, including older shoppers for whom a trip to the store is as much about human interaction as anything else. “A lot of them will say, ‘I didn’t come here to talk to a machine,’ ” said a worker at a Walmart in Dunedin, Fla., who spoke on the condition of anonymity because he didn’t want it to affect his job. “ ‘I came here to shop and have someone help me with my groceries.’ ” (source)

While Walmart and other retailers may like to spin the impending robot workforce takeover as a positive thing for humanity, in reality, it “is an issue of growing concern for many employees across a range of industries,” reports Digital Trends:

The matter was brought into sharp focus by the World Economic Forum last year when it forecast that machines may be capable of performing half of all “work tasks” globally by 2025 — that’s equal to around 75 million jobs — though we should point out it also estimated that more than 130 million human jobs could be created during the same time-frame. (source)

Retail jobs were already disappearing at an alarming rate. Now it appears that remaining retail positions are increasingly at risk of being lost to artificial intelligence. How long until humans are rendered entirely obsolete?

Do you think robots will eventually replace human workers entirely? If so, how soon do you think it will happen? Have you seen a robot “employee” in a Walmart store yet? Please share your thoughts in the comments.