Unconstitutional Searches of Electronic Devices at American Airports Have Quadrupled 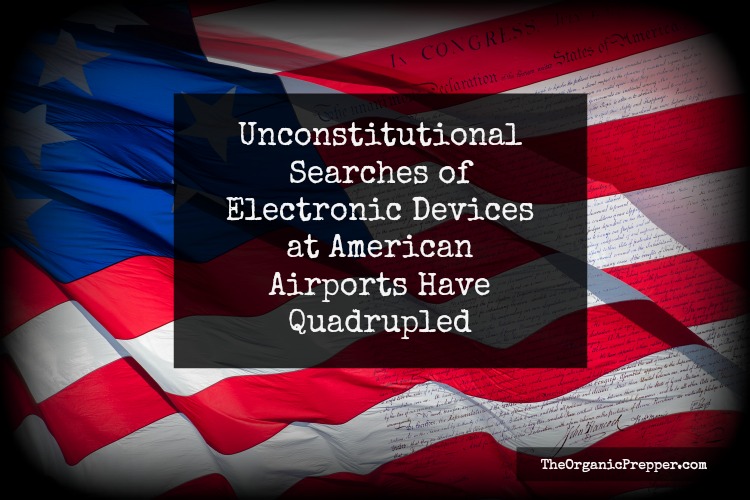 “Go to any airport in this country and you’ll see how well our government is dealing with the terrible danger you’re in. TSA staffers are wanding 90-year-old ladies in wheelchairs, and burrowing through their suitcases. Toddlers are on the no-fly list. Lipsticks are confiscated. And it’s all done with the highest seriousness.

It’s a show of protection and it stirs the fear pot, giving us over and over an image of being in grave personal peril, needing Big Brother to make sure we’re safe.” – Ann Medlock, Home of the Brave

The federal government wants us to believe that its growing disregard for our First and Fourth Amendment rights is in the interest of national security.

Thankfully, there are organizations that are attempting to bring attention to the ever-expanding police state – and are even willing to fight them in court.

America is turning into a Constitution-free zone.

Since 2015, U.S. government searches of travelers’ cellphones and laptops at airports and border crossings have nearly quadrupled.

You might be tempted to believe that these searches are done for good reasons.

Those searches are “being done for reasons beyond customs and immigration enforcement, according to papers filed Tuesday in a federal lawsuit that claims scouring the electronic devices without a warrant is unconstitutional,” according to the Associated Press:

The government has vigorously defended the searches, which rose to 33,295 in fiscal 2018, as a critical tool to protect America. But the newly filed documents claim the scope of the warrantless searches has expanded to assist in enforcement of tax, bankruptcy, environmental and consumer protection laws, gather intelligence and advance criminal investigations.

Agents with U.S. Customs and Border Protection and U.S. Immigration and Customs Enforcement consider requests from other government agencies in determining whether to search travelers’ electronic devices, the court papers said. They added that agents are searching the electronic devices of not only targeted individuals but their associates, friends, and relatives. (source)

Border officers are conducting searches without a warrant.

CBP and ICE policies allow border officers to manually search anyone’s smartphone with no suspicion at all, and to conduct a forensic search with reasonable suspicion of wrongdoing. CBP also allows suspicionless device searches for a “national security concern.”

The previously undisclosed information about the searches was included in a motion the Electronic Frontier Foundation (EFF) and the American Civil Liberties Union (ACLU) filed Tuesday in U.S. District Court in Massachusetts. The groups asked a federal court to rule without trial (called a summary judgment) that the Department of Homeland Security violates the First and Fourth Amendments by searching travelers’ smartphones and laptops at airports and other U.S. ports of entry without a warrant.

Last year, U.S. District Judge Denise Casper in Boston rejected the government’s request to dismiss the lawsuit, allowing the case to move forward. The ACLU and EFF began gathering documents and deposition testimony. Based on the new information, they filed a motion asking the judge to rule in their favor without a trial. “Travelers’ devices contain an extraordinary amount of highly personal information that the government can easily search, retain, and share,” the motion argues.

This information was obtained as part of a lawsuit, Alasaad v. McAleenan, EFF, ACLU, and ACLU of Massachusetts filed in September 2017 on behalf of 11 travelers – 10 U.S. citizens and one lawful permanent resident – whose smartphones and laptops were searched without warrants at U.S. ports of entry.

The plaintiffs are asking the court to rule that the government must have a warrant based on probable cause before conducting searches of electronic devices, which contain highly detailed personal information about people’s lives.

Among the plaintiffs are a limousine driver, a military veteran, journalists, students, an artist, a NASA engineer, and a business owner. They are also requesting the court to hold that the government must have probable cause to confiscate a traveler’s device.

The government can keep your data and share it with other entities.

In addition, the plaintiffs are demanding the government expunge from investigatory databases information obtained in past searches. ICE and CBP both allow officers to retain information from travelers’ electronic devices and share it with other government entities, including state, local and foreign law enforcement agencies, the court papers claim.

Travelers who have had their electronic devices searched at the border run increased odds of being subject to future device searches as they can be flagged in government databases for additional scrutiny on that basis, the plaintiffs say.

Adam Schwartz, senior staff attorney for the EFF, elaborated in a press release:

“The evidence we have presented the court shows that the scope of ICE and CBP border searches is unconstitutionally broad.

“This new evidence reveals that government agencies are using the pretext of the border to make an end run around the First and Fourth Amendments. The border is not a lawless place, ICE and CBP are not exempt from the Constitution, and the information on our electronic devices is not devoid of Fourth Amendment protections. We’re asking the court to stop these unlawful searches and require the government to get a warrant.” (source)

Government is abusing its power under the guise of security.

It might be tempting to believe that allowing the government to violate our rights is the price we pay for a safer country…that the ends justify the means.

If you are inclined to think that way, please consider the following questions from John W. Whitehead, Constitutional attorney and founder of The Rutherford Institute:

How far would you really go to secure the nation’s borders against illegal aliens?

Would you give the government limitless amounts of money to fight yet another endless war? Surround the entire country with concrete walls and barbed wire? Empower border police to do whatever it takes to crack down on illegal immigrants, even if it means violating their human rights? Hold your nose and tolerate all manner of abuses in name of national security?

Would you allow government agents to trample on the rights of anyone who gets in their way, including legal citizens? Relinquish some of your freedoms in exchange for the elusive promise of non-porous borders? Submit to a national ID card that allows the government to target individuals and groups as it chooses in order to identify those who do not “belong”? Turn a blind eye to private prisons and detainment camps that profit off the forced labor of its detainees?

Would you turn your backs on every constitutional principle for which our founders fought and died in exchange for empty campaign promises of elusive safety by fast-talking politicians?

This is the devil’s bargain that the U.S. government demands of its people. (source)

Immigrants are not the only ones being subjected to warrantless searches.

As part of the government’s so-called crackdown on illegal immigration, drugs and trafficking, its border patrol cops are expanding their reach, roaming further afield and subjecting greater numbers of Americans to warrantless searches, ID checkpoints, transportation checks, and even surveillance on private property far beyond the boundaries of the borderlands.

That so-called border, once a thin borderline, is now an ever-thickening band spreading deeper and deeper inside the country.

As journalist Todd Miller explains, that expanding border region now extends “100 miles inland around the United States—along the 2,000-mile southern border, the 4,000-mile northern border and both coasts… This ‘border’ region now covers places where two-thirds of the US population (197.4 million people) live… The ‘border’ has by now devoured the full states of Maine and Florida and much of Michigan.” (source)

It is time to ask ourselves how much liberty we are willing to sacrifice in exchange for a bit of security (security the government isn’t even good at providing).

Do you think ICE and CBP should be able to continue to conduct warrantless searches and seizures? Do you believe that these practices are making the country safer? Will they lead to increasing violations of our Constitutional rights?