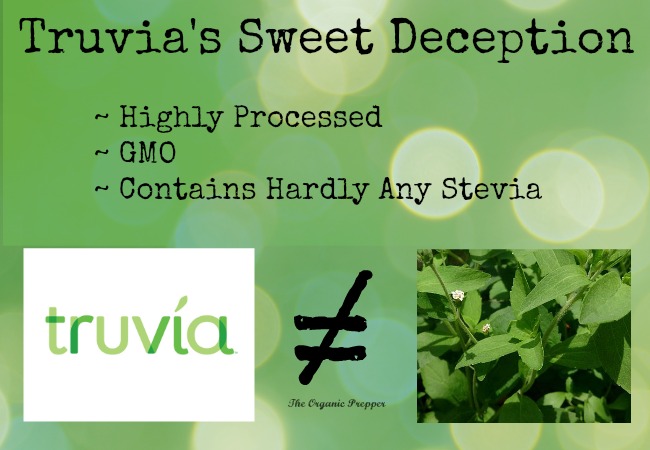 became more commonly available, I’m afraid I have some bad news for you.

All of that hype about the “new” zero-calorie Truvia? All the talk about how natural it is? That’s just not true.

Incidentally, while the FDA has approved this bastardization of stevia, the actual leaf, where the active chemicals are found, is banned from sale as a food additive or sweetener and may only be sold as an “herbal supplement.”

There’s a direct connection to Big Agri – Cargill, a privately held, multi-billion dollar corporation, was the driving force behind getting FDA approval of the sweetener, despite evidence that it might not actually be safe in its processed form. Cargill is also a major player in the meat industry (with all of its unspeakable feedlot horrors) and has been subject to numerous food safety recalls over the past few years due to contaminated meat. Cargill, that bastion of food safety, was the driving force behind the FDA’s decision to switch the status of stevia from a “supplement” to a food that is “generally recognized as safe”.

Cargill wasn’t alone, however. Big Food joined forces, since diet soda sales have plummeted over the past 10 years. According to the Wall Street Journal, the sale of low-calorie soft drinks has declined by billions per year over the past decade, as consumers became aware of the potential risks of neurotoxic artificial sweeteners.

So, to combat those health concerns, Coca Cola produced Truvia and Pepsi produced PureVia. Now, I don’t know about you, but I can’t consume anything produced by either of those companies (both Coke and Pepsi lobbied fiercely against the labeling of GMOs) and delude myself into believing the product is healthy.

Decades ago, diet sodas were touted as a healthy way to have a refreshing beverage without expanding your waistline. Unfortunately, the zero-calorie beverages were anything but healthy, and many people have suffered ill effects from the consumption of those drinks. Even corporate-funded Fox News was forced to admit that diet sodas were detrimental to human health.

Enter Truvia, the cure for all of those diet soda ills. Because, it’s natural!

Truvia is the second best-selling sugar substitute in the United States, most likely because the deceptive marketing is targeted at those who want to make healthier, less artificial choices. Remember how last week we discussed that Big Food isn’t making very much money? This is just the next volley of propaganda in which Big Food attempts to deceive the public into believing their processed food-like substances are actually food. Sales of Truvia in 2014 exceeded $400 million.

But…Truvia is not actually “natural”

Not so fast. While it’s true that the powdered stevia you get in the little packets is in part derived from a plant grown in Paraguay, it isn’t just the plant you’re getting. If it was just a powdered up plant, Coca Cola and Cargill wouldn’t be able to hold the patents to make it, right?

Traditionally, a leaf from the stevia plant was dropped into a hot beverage to steep and lend its sweetness. But the current product that’s being touted for its “natural sweetness” is a far cry from a leaf from the garden. (Despite how Cargill glosses over the heavy processing on the Truvia website.) In fact, Cargill had to settle a civil lawsuit a few years back because of their claims that the product was natural. The lawsuit forced them to put millions of dollars aside to settle future claims and they were required to put an asterisk on their tagline “Nature’s calorie-free sweetener.”

Despite the fact that erythritol is made from corn, and most corn is GMO, the Truvia website provides the strangest dance of denial I’ve witnessed in quite some time. They seem to feel that since it’s just derived from corn, then processed like crazy, that the origin of the corn has no bearing on the end product.  Here’s what the website says, which sure sounds to me like GMO corn is used:

Do you use GMO corn to produce the erythritol used in Truvía® natural sweetener? [Link]

The erythritol used in Truvía® natural sweetener is produced by a yeast organism that is found in nature. The yeast “ferments” or “digests” dextrose and other nutrients. Dextrose is the food for the yeast – much like corn may be food for a cow that produces meat or milk. The dextrose is derived from the starch component of U.S.-grown corn. Both GM corn and non-GM corn are grown in the U.S. today. Cargill does not segregate the corn used to manufacture the dextrose used in the erythritol process.

Why is Truvía® natural sweetener non-GMO if you use GMO corn? [Link]

Pardon me, but I sincerely doubt that Truvia is manufactured from the mere 12% of corn in the United States that is not GMO.

Here’s how Truvia is made

We talked about erythritol and it’s genetically modified origins above. This ingredient makes up 95-99% of the “natural sweetener.” Straight from the Cargill website, here’s how erythritol is made:

Erythritol is the first polyol to be manufactured on a commercial scale by a fermentation process. The starting material is a simple sugar-rich substrate which is fermented by a yeast like fungus to yield erythritol.

The product is then crystallized to 99.5 percent purity from the filtered and concentrated fermentation broth. 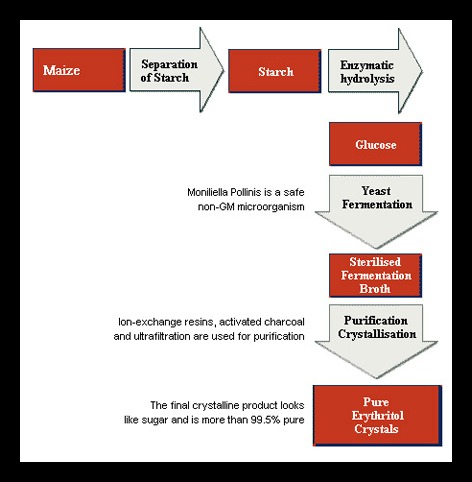 Rebiana (chemical name rebaudioside A)  makes up less than 1% of the little packet. Rebiana (also called Reb-A) is a substance that is derived from the stevia leaf, but is not actually stevia. Although Truvia’s website says that Rebiana is retrieved from the stevia leaf by soaking it in water, the patent held by Coca Cola divulges that it actually takes 40 steps (!!!) to extract the desired molecule, steps that include the use of yummy stuff like acetone, methanol, ethanol, acetonitrile, and isopropanol.

A Dishonorable Mention Goes to Stevia in the Raw

Another deceptive product on the stevia bandwagon is Stevia in the Raw. It’s also not really stevia -it’s primary ingredients are dextrose and maltodextrin, both derived from corn, and both likely to be genetically modified. As well, maltodextrin often contains MSG, which doesn’t have to be disclosed in the ingredients list.

While we’re on this subject, stevia alone may not be great for reproductive health. Women in South America use the herb to decrease the likelihood of conception. Check out this video on the topic.

The Conclusion? Truvia is NOT Stevia

Here’s the long and the short of it: if you have a sweet tooth, you simply have to understand that sweet things have calories. Whether you decide to consume things that are sweet is entirely up to you, but a non-harmful, no-calorie sweetener is simply the stuff of fairy tales. Little packets of sweet substances without calories are, without exception, highly processed and often very harmful.

If you want to sweeten a beverage with stevia, your very best bet is to make like the folks in Paraguay and steep a leaf of it in your beverage.(You can get organic stevia leaves HERE

, or you can grow it yourself

.) The second best option is a pure extract like this one

Truvia, for all its gushing propaganda, contains less than 5% of anything even derived from the stevia plant, much less actual stevia.