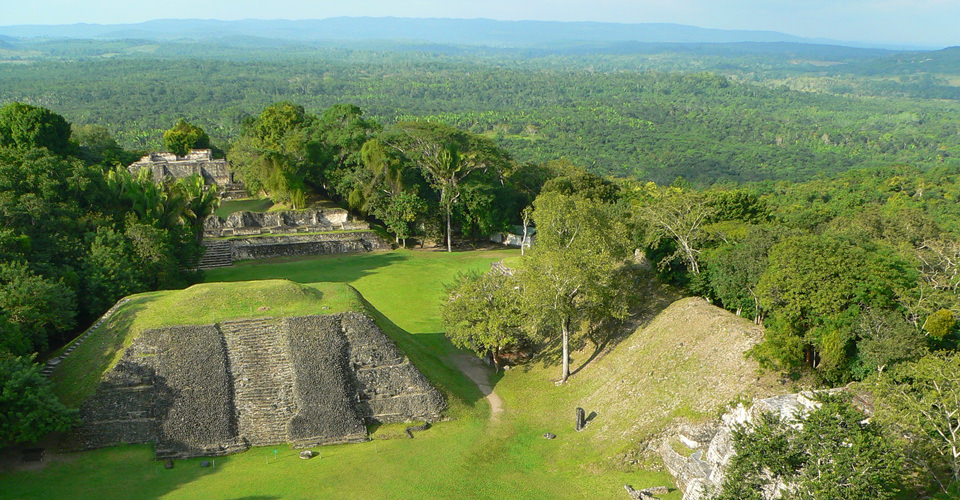 There’s been trouble in the tropical paradise of Belize.

Despite the fact that the federal government of Belize has banned all GMO seeds from the country’s borders, a field of GMO soybeans was found growing in the northern portion of the country.  (Two weeks ago, an errant field of unapproved GMO wheat was discovered in Oregon – these examples make it clear that Monsanto and the rest of the biotech industry have no regard for the regulations that disallowed these crops to be planted.)

GMO Awareness Month was conducted in response to a recent push by the newly-formed Belize Grain Growers Association to gain Government approval for the importation of GMO corn seed. This GMO v.s. NON-GMO conflict pits the Mennonite and other commercial grain farmers against the cultural natives, the Maya, who first brought corn to the world. Throughout the entire month of March, members of the social network Facebook group Belizeans Against GMOs (BAGMO), now numbering over 1,700, orchestrated a GMO educational campaign which included weekly full-page educational advertorials and letters-to-the-editor in the national Amandala newspaper. (These can be reviewed at: (http://www.belizeansagainstgmo.info/index.html). BAGMO members not only appeared on Belizean TV/radio talk shows but they also promoted a GMO writing contest with cash prizes for students in secondary schools throughout Belize. (press release)

The lovely Central American country is a popular eco-tourism destination, and perhaps this is the reason that they are so environmentally conscious.  The government of Belize appears to be adamant about keeping GMO crops out of the country.  The following press release was issued by the Government of Belize Press Office on June 7. 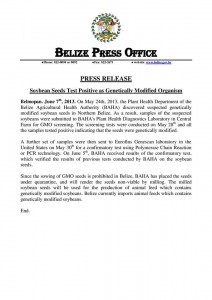 “On May 24, 2013 the Plant Health Department of the Belize Agricultural Health Authority (BAHA) discovered suspected genetically modified soybean seeds in Northern Belize.  As a result, samples of the suspected soybean seeds were submitted to BAHA’s Plant Health Diagnostics Laboratory in Central Farm for GMO screening.  The screening tests were conducted on May 28 and all the samples tested positive indicating that the seeds were genetically modified.

A further set of samples were then sent to Eurofins Genescan Laboratories in the United States on May 30 for a confirmatory test using Polymerase Chain Reaction or PCR technology. On June 5th, BAHA received results of the confirmatory test, which verified the results of previous tests conducted by BAHA on the soybean seeds.

Since the sowing of GMO seeds is prohibited in Belize, BAHA has placed the seeds under quarantine, and will render the seeds non-viable by milling. The milled soybean seeds will be used for the production of animal feed which contains genetically modified soybeans. Belize currently imports animal feeds which contains genetically modified soybeans.”  (source)

(Author’s note: Although the government of Belize is to be sincerely applauded for supporting the ban on GMO seeds, feeding livestock GMO crops is dubious because it still introduces the genetically modified material into the food chain.)

Back in 2011, outrage in Belize resulted in the public burning of GMO corn seeds.  BAGMO wrote, “Central America is the birth place of corn. Belize is known for its magnificent biodiversity, astounding natural resources, and tremendous cultural heritage. The introduction of genetically modified corn would negatively affect biodiversity, natural resources and the cultural heritage of the Maya.”

Thus far Belize has been steadfast in the fight against GMO crops.  They don’t want corn fields that require Kevlar tires on the vehicles to drive through them scattered in amongst the ancient ruins and rain forests of their pristine environment.

This find, along with the unapproved GMO wheat that made it’s appearance in Oregon, makes it very clear that  Monsanto and their ilk have no interest in respecting the wishes and regulations of the nations who have banned their biotech corruptions or in waiting for approval from their yes-men in government agencies..   They are breaching the gates by throwing around money, hiring disinformation agents, and when all else fails, arrogantly disregarding the laws and having their seeds planted anyway.

In Belize, the fight against GMOs in paradise goes on.  Denise Frank, the spokesperson for BAGMO, requests support.”BAGMO members ask the rest of the world to stand with them in solidarity in their efforts to keep Belize GMO-free and to help fight this recent criminal action to the fullest extent of the law. https://www.facebook.com/groups/bagmo/”