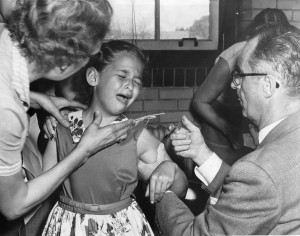 People like to shake their heads at the eccentricities of those of us who eschew vaccines for ourselves and our families, but a recent document that was published (then immediately removed from the website) by the CDC gives even more credibility to our claims of “You just don’t know what’s in that stuff.”

A polio vaccine injection that was given to people between 1955-1963 contained a live cancer virus.  Here is a cached copy of the CDC document.

So….more than 50 years after the fact, the CDC quietly admits that this vaccine could have kept folks from getting polio but may have given them cancer instead??????????????

A peer reviewed paper from the Cardinal Bernardin Cancer Center at Loyola University confirms this.  According to the research, the procedure used to inactivate the virus was not effective.

We determined that the procedure used by this manufacturer to inactivate SV40 in oral poliovirus vaccine seed stocks based on heat inactivation in the presence of MgCl2 did not completely inactivate SV40. These SV40-contaminated vaccines were produced from early 1960s to about 1978 and were used throughout the world. Our findings underscore the potential risks of using primary monkey cells for preparing poliovirus vaccines, because of the possible contamination with SV40 or other monkey viruses, and emphasize the importance of using well-characterized cell substrates that are free from adventitious agents.

This story is not new – many of of us who thoroughly researched the vaccination issue before choosing whether or not to immunize were already aware of this fact years ago.

I became aware of the tainted polio vaccines from 1955-1963 in the late 1990′s and it was one of the primary motivators for me to choose a “no shots, no way” approach for my children.

What is new is that the CDC is finally admitting it.

What took you so long CDC? Many of the folks vaccinated with the tainted polio stock are already dead from cancer with many more getting diagnosed each and every day! (source)

Much like today, parents then were terrified and guilted into providing their child with the polio vaccine. By doing so, they may have saved that child from polio but sentenced them to a different early death from cancer.  Up to 30 million people may have been affected by this vaccine that was forced upon them by the government.  And the thing is, no amount of parental research can protect a child from something like this – if a substance is injected into your child, you have to take it on faith as to the ingredients in that hypodermic needle.  Do you really trust the government and Big Pharma with your child’s life?

The most frightening part of all is that in many parts of the world, this vaccine was mandatory.  Much like the people forced to take a flu shot to retain their jobs, children forced to take a series of vaccinations to attend school, or a host of other “health benefits” being foisted upon us, a deadly virus was injected into millions of kids around the world, whether they wanted it or not.  Let this be a lesson as you listen to the pediatrician tell you about the mandatory shots they want to give to your child – the HPV, the childhood immunization series, and the annual flu shot. Don’t forget those shots that are rushed to market in the face of some horrible epidemic. Anything could be in those little vials and 50 years down the road, your children might discover that they too were poisoned, whether through a tragic laboratory mistake, a deliberate depopulation maneuver, or even a twisted human experiment.

And who is being held accountable for this?  Who is going to jail for committing murder on such a massive scale?  Who is being charged with negligence for allowing this to happen?  Who is being taken to task for making this toxic vaccine mandatory?

If Looks Could Kill: Is Your Beauty Regimen Putting You at Risk for Cancer?

Crimes Against Humanity: How Monsanto is Turning a Hawaiian Island into a Petri Dish Complete with Human Lab Rats