The Walking Dead: 7 Mistakes That Would Get Somebody Killed in a Real Zombie Apocalypse 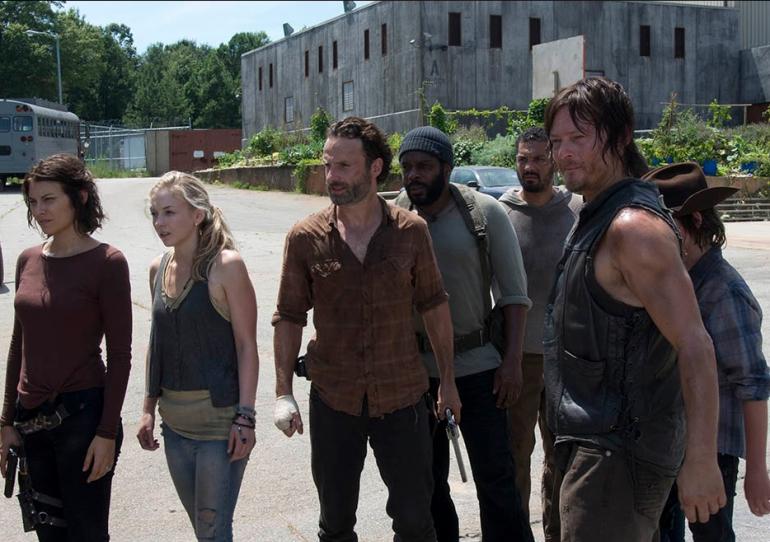 I don’t watch much TV, but my guilty pleasure is AMC’s The Walking Dead. Lots of the preppers I know love watching this show and shouting out advice and criticism – it’s like our version of watching “the big game”.

I have to tell you, watching from a prepper/survival point of view, it seems like this season that the main characters are just muddling along, tempting the writers to kill them off. They definitely aren’t surviving based on any real skills or planning.

Here are some vital mistakes that the group has made just in the last few episodes, and what lessons we can learn from them:

1.) Why would they all follow the lead of a guy who hallucinates about his dead wife and makes horrible decisions?

It’s important that every group has a leader, but that leader should not be followed blindly.  Random hallucinations are not a sign of stellar mental health, and Rick has made a series of terrible rash decisions. He treated his poor wife horribly for a decision she made when she thought he was dead, then had a guilty nervous breakdown, complete with hallucinations, when she died.  He has coldly booted out people who might be good members of the community without even giving it a second thought, creating enemies instead of allies. He tried to keep Michonne out of the group, but luckily for himself, didn’t succeed since she’s saved both him and his son more than once since that time.  He made the executive decision to kick Carol off the island without discussing it with anybody else, even though he too has killed people that perhaps shouldn’t have been killed.  Leaders really shouldn’t be whiny, delusional, judgemental, and reluctant. I have wondered since the beginning why Daryl wasn’t the leader. He’s the one that feeds them, fights for them, and literally, keeps them all alive, so why is he second fiddle to Rick?  A badge and a resume mean nothing in a survival situation – skills and integrity are the only qualifications that matter. (Learn more about different personality traits in a survival situation HERE.)

2.) Why on earth didn’t they have bug out bags?

After losing umpteen potential homes over the past 3 seasons, could someone explain to me why no one thought it would be a good idea to have a bag to grab and go with, should disaster strike the prison? Instead these folks, who should by now be seasoned survivors, are running around in the woods on foot with only the clothes on their backs. Hello!!! Pack a bag and keep it by the door! Maybe everyone wouldn’t have had a chance to grab their bag, but at least some people would have had food, tools, and weapons. (Learn more about non-Zombie bug-out bags HERE and every day items that can be lifesaving HERE. )

3.) On the same note, would you go anywhere without an every day carry kit?

Ask any mom who has ever loaded up a diaper bag to sustain a toddler through a one hour outing.  There are some things you don’t even go into the back yard without. So if you are living in the midst of a fluid situation, wouldn’t you keep the most vital tools for survival on your person? At the very least, you should be wearing a knife, carrying a lighter or flint, and have a small bag with things like flashlights, batteries, wipes, first aid kit, water, and a couple of granola bars. Note how Daryl never takes a step without his crossbow and Michonne keeps her katana strapped to her back? How are they the only people that realize it doesn’t pay to be searching for a weapon at the very moment a zombie is trying to eat your face? (Learn more about minimum vital tools HERE.)

4.) Why don’t they teach their children not to just freak out and run away?

How many kids have to run into the woods and get lost, eaten, shot, etc., to convince people to teach their children what to do when a horde of walkers comes lurching towards them?  The only person who seems determined to prepare the children of the prison on how to survive is Carol, because that is how she lost her daughter Sophia in an earlier season, and…well, Rick turfed her. Carl had to become self sufficient alone, because his father was trying to shelter him and keep him from becoming a sociopath. Teach your kids how to successfully evade a threat, how to hide, and how to fight when backed into a corner.  In crazy situations, you can’t say, oh, that knife is sharp, so I’d better not let my daughter use it.  Instead, teach her how to use it without cutting her hand off.  Teach your kids everything you can about the enemy or the threat, because the day might come when you are not right there by their sides. Teach them basic skills, like building a fire, creating a snare, and what they can forage for without poisoning themselves. (Learn more about preparing your kids HERE and HERE.)

5.) Why in the name of  heaven didn’t they have a predetermined rally point?

In the midst of a zombie apocalypse, just like any other type of disaster, communications are down, and your current situation is not stable. It never pays to get too comfortable, and you must always have in the back of your mind, a back-up plan. Because of this lack of a back-up plan, it was mass chaos when the prison was overrun, and people died because they were trying to figure out what to do. The plans should have been in place so that people could react instantly to a sudden change in circumstances.  People could have bailed with confidence that those who survived would be able to find one another. The group should have come up with at least two different locations where they would either meet or leave messages for the other members if things devolved. Instead, they’re all wandering around, mourning those who are missing and hoping to just run into the other folks through dumb luck.  Really, Rick? (Learn about creating a family emergency plan HERE.)

6.) Where are the supply caches?

See #2 above about bug-out bags – when you are living through a Zombie Apocalypse, how many times do things have to go horribly wrong before you realize that you should stash things like food, weapons, and water filters in designated places?  All of the people wandering around the woods might not be risking poisonous berries and fetid water if they had taken the simple precaution of hiding some caches in the surrounding area. (Learn more about survival caches HERE.)

7.) Why would Daryl and Beth have an emotional meltdown and burn their shelter to the ground in the middle of the night?

Emotions have a time and a place, and the middle of a Zombie Apocalypse is neither of those.  I’m sorry that Daryl had a rotten childhood, I’m sorry that Beth’s boyfriends keep getting eaten, but Jimminy Cricket, don’t burn down the building that stands between you and all the zombies as some sort of catharsis! Or if you do, at least wait until daylight so you can see what’s coming for you. I could only sit and roll my eyes during last night’s episode. Any survival situation is bound to be terrifying, emotional, and full of loss, but if you want to survive, you have to be able to compartmentalize those things. This is not the time to lie on the shrink’s sofa and psychoanalyze your childhood and your feelings. Sorry to be abrasive but in these situations you have to man up, woman up, suck it up.  If you want to live, you don’t have the luxury of a nervous breakdown. Accept, adapt, survive. (Learn more about adaptation and survival HERE.)

With all of the craziness in the world right now, with the economic system collapsing, real-life iPhone zombies roaming the streets, and the entire world being on the cusp of a pre-planned war, sometimes it’s fun to have a little light entertainment like watching The Walking Dead with a big bowl of popcorn.  Just make sure you use it as a cautionary tale instead of an example of how to survive.

I know that many of you are fans of the show…what deadly mistakes have you seen in recent episodes? Share your observations in the comments section below.