The Prepper’s Dictionary: The Jargon and Acronyms You Need to Know 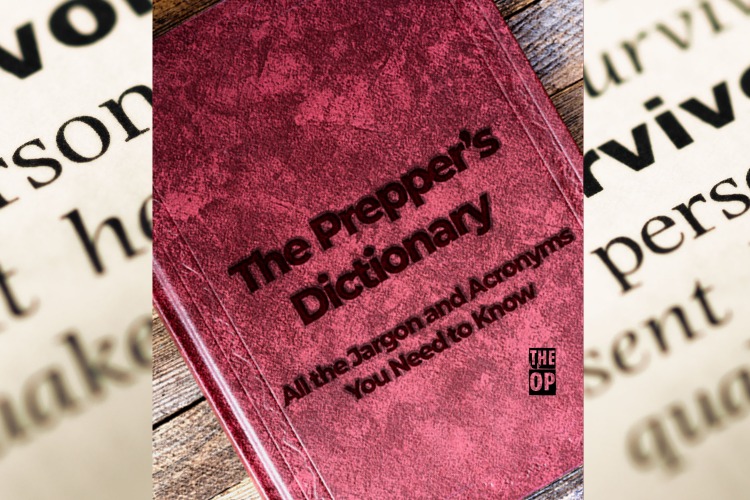 Do you ever start reading a prepping article and have absolutely no idea what the heck the writer is talking about because of all the jargon? Are you wondering what all those prepper acronyms actually stand for? Do you wish you had a prepper’s dictionary to translate it all?

Especially when you’re new to the preparedness world, survival jargon can be very confusing. Now you’re covered with this little glossary just for preppers.

ABC: Airway Breathing Circulation. This is the order in which you assess things when faced with an ill or injured person. (Learn more)

Alpha Strategy: This is when you store more long-term preps than your family needs, specifically for barter or charity in a crisis situation. (Learn more.)

Bugging In: Staying put in your present location during a crisis or collapse situation. (Learn more)

Bugging Out: Leaving your present location during a crisis or collapse situation. Evacuating.  (Learn about bugging out and get an evacuation checklist.)

BOB: Bug Out Bag. A bag packed with everything you will need to survive away from home for a minimum of 72 hours. The bag should contain essentials like food, necessary tools, a compact food supply, a filtration device, and personal items, such as prescription medication or spare eyeglasses, that fit your circumstances. (Learn more about a comprehensive bag and a smaller one.)

BOL: Bug out location or Bug out lodge. This is a retreat to which you plan to relocate should your home become compromised. (Learn more.)

BOR: Bug out route. This is a map with at least two routes that you can follow clearly marked on them before the time comes to leave your area. ( You should practice by traveling the route, looking for problems along the way, and locating stops for shelter, water, or sustenance.) (Learn more.)

BOV: Bug Out Vehicle. Your vehicle of choice for moving from your current location to your retreat. (Learn more and also consider bicycles.)

Cache: Stored goods in locations along your route to get home or to your BOL. The term is also used to refer to supplies that you have buried for security reasons. (Learn more.)

CC: Concealed Carry. This refers to carrying a firearm on your person that is hidden from the view of others.

CCP: Concealed Carry Permit. This is a license from your local government that allows you to legally carry a firearm in most places. (Exceptions will vary by location.)

CME: Coronal Mass Ejection. An ejection of plasma from the sun that travels to earth and has the ability to fry electricity transformers causing widespread long-term blackouts over large geographic areas. Also known as solar storms. (Learn more.)

EDC: Every Day Carry: A small kit you have with you every day. (Learn more.)

EMP: Electromagnetic Pulse. A natural or man-made pulse of electromagnetic energy that can be strong enough to knock out the power grid over a large geographic area. (Learn more.)

FAK: First Aid Kit. Not the basic with a few bandaids and some Neosporin, but a full-on tactical kit with supplies for treating major traumas like gunshot wounds.

FUBAR: F****d Up Beyond All Recognition Total disaster, irreparable.

GMO: Genetically Modified Organism. Many preppers opt against food that has been genetically modified.

GHB: Get Home Bag. This should contain everything you need to make it from a location like work or school to your home should an emergency arise.  (Learn more.)

GOOD: Get out of Dodge. Rapid evacuation. Usually in connection with an event that has made your location unsafe to remain in. (Learn more.)

Grey man: This is a method of camouflaging yourself in plain sight. Blending in, not being noticeable or easily describable. (Learn more.)

Hunker down: Staying safely at home for the duration of an emergency. (Also: Bugging In)

INCH: I’m Never Coming Home. Code to let your family or survival group know that you can’t get home and they shouldn’t hang around waiting for you but should continue with the plan you made as a group.

LED: Light-emitting diode. Tiny light bulbs that fit easily into an electrical circuit. They are extremely long-lasting which makes them popular for emergency lighting. (Learn more.)

MAG: Mutual Aid Group. A group of people who meet on a regular basis to discuss prepper topics and offer ideas, support, and assistance to each other. (Learn more.)

Martial Law: When the constitution and ordinary laws are suspended and the highest-ranking military official is in charge, as opposed to an elected official. This is reserved for times of extreme crisis.

MRE: Meals Ready to Eat. A term for pre-cooked pouch meals you can open and eat on the move. These are widely used by the military and often have a small flameless heater. (See FRH) (Find MREs here.)

MSM: Main Stream Media. This refers to network news and large corporate newspapers. Not the most reliable source of information in many cases, due to political bias.

N95 Mask: A protective mask that filters at least 95% of airborne particles. (Get them here.)

N100 Mask: A protective mask that filters at least 99.97% of airborne particles. Use this if the contaminant or virus is made up of smaller particles. (Get them here.)

NAD: Not A Drill. A term used by military and law enforcement to indicate that an event is serious and legitimate. If you hear this, get moving.

NWH: Nuclear Warhead. The nuclear device attached to the end of a missile.

OC: Open carry. Carrying a firearm on your person that is not hidden from the view of others.

OPSEC: OPerational SECurity. A military term. Keeping your operation secure means that you are careful not to disclose seemingly benign tidbits of information that could be pieced together by someone with the intent of commandeering your supplies or home. In other words, “Loose lips sink ships.” (Learn more.)

PAW: Post-Apocalyptic World. What remains of society and technology after a massive disaster.

PDW: Personal defense weapon. A weapon you carry on your person like a small firearm, knife, etc.

PSK: Personal Survival Kit. A small kit, often in a tin, that contains essential items that can get you out of a tight spot, like a mini compass, signal mirror, fishing hooks and line, flint, etc. (This is a good ready-made version.)

QT: Quiet/quietly. Doing something silently or unobtrusively to avoid notice. This can also mean to do something secretively.

RECON: Reconnaissance. This is a mission to secretively obtain information about a person or place. Often one person from the group will go ahead and check things out and make certain the situation is safe before everyone else arrives. (Learn more.)

Rule Of Three: Generally considered to be the cut-off point for human survival: 3 minutes without air, 3 days without water, 3 weeks without food.

Sheeple: People who blindly obey or believe what they are told without applying critical thought.

Shelter-In-Place: Staying where you are during an emergency rather than trying to get home/out-of-the-area. This is advised when travel would be dangerous.

SHTF: Sh*t hits the fan. This is an acronym that preppers use for an epic, potentially life-changing disaster.

SITREP: Situation report. When a member of a survival group reporting back to the “duty manager” of the group after a period on watch. Alternatively, someone returning from a scouting mission reporting what they have seen and heard.

TEOTWAWKI: The End Of The World As We Know It. An acronym used to describe an event of life-changing, apocalyptic proportions. (This book is a classic on the subject.)

TPTB: The Powers That Be. An acronym used to describe politicians, billionaires, and policymakers. (Usually considered a derogatory term.)

VEI: Volcanic Explosivity Index. A scale that measures “explosiveness” of a volcanic eruption so that events can be compared with one another.

WMD: Weapons of Mass Destruction. Weapons that are capable of causing widespread death and destruction, usually chemical, biological, or radioactive in nature.

WROL: Without Rule Of Law. The lawlessness that follows a societal collapse or breakdown. (Learn more from this example.)

YOYO: You’re On Your Own. An acronym used to refer to a situation in which there are no first responders, no law enforcement, and no medical assistance. You have only yourself on which to rely.

Zeer Pot: Off-grid refrigeration method in which a large terracotta pot houses a smaller terracotta pot. The gap between is packed with sand which is then made wet. Evaporation keeps the food inside many degrees cooler than the ambient air temperature. (Learn more.)

ZOMBIE: Not the Walking Dead kind, but a person (or group of people) who wander around trying to figure out what to do next. After the shock at their new reality has subsided, they will become hungry, desperate, and dangerous.

Anything to add or ask?

Are there any prepper words, phrases, or acronyms that have you stumped? Are there any we left out? Share your thoughts in the comments. 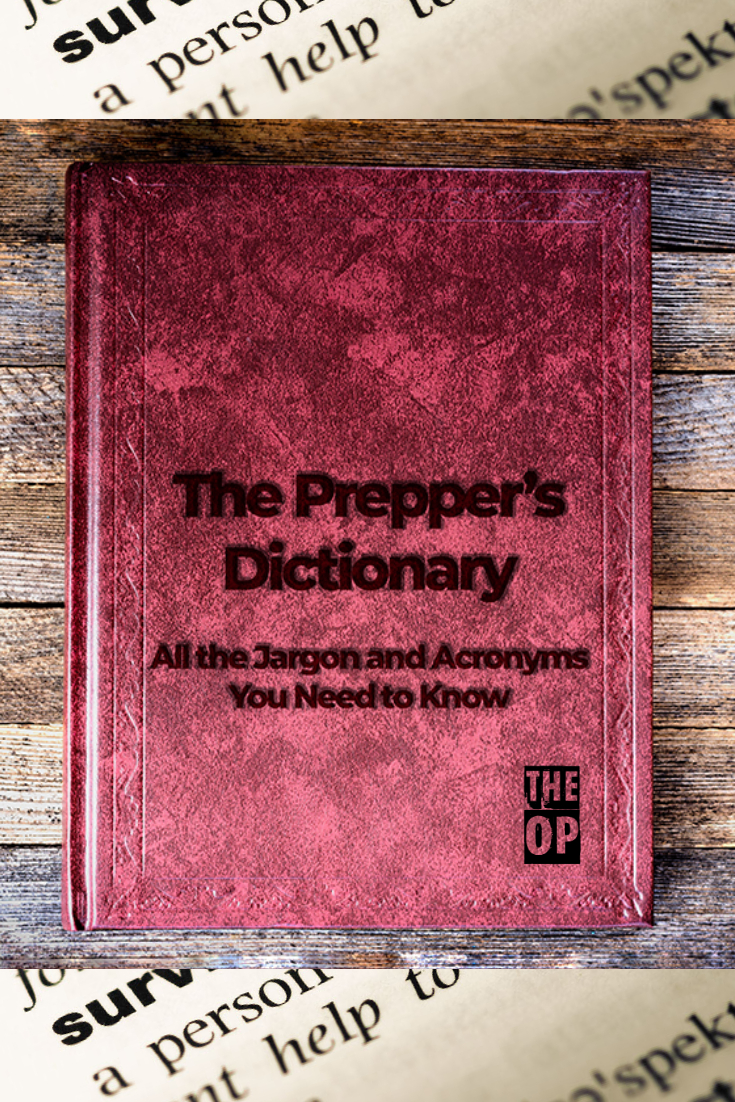