Survival Saturday: Secret Food Monopolies, the Presidential Race, and How to Start a Zombie Apocalypse 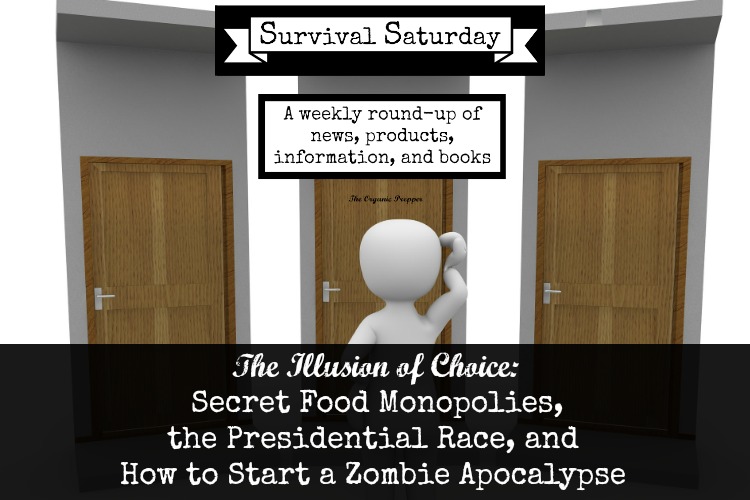 This week, the focus is on the illusion of choice. We are presented with the same stuff wrapped up differently in nearly every facet of our lives. We’re like rats in a maze. They think they’re picking their own route, but lured with different kinds of cheese, they all end up being funneled to the same place – the place of their handler’s designation.

So, for this election, one candidate might seem like Swiss cheese, and the other might seem like cheddar, but both are moldy with something incredibly toxic. You might think that the voters are choosing, but they’re opting for the same mold in a different flavor of cheese. Real freedom is choosing none of the offerings, getting out of the maze entirely, milking your goat, and making your own darned cheese.

This illusion of choice carries through many facets of our lives, including the food we eat, the media we choose to consume (Did you know that 6 different corporations own nearly all the outlets? So much for impartiality in the press), and our much-touted  election process.

This week, there was a massive recall of frozen fruits and vegetables. Shoppers from Costco, Walmart, Safeway, and many other grocery stores discovered that the produce in their freezer could be tainted with the listeria bacterium.  For a full list of the foods that are potentially affected, you can go here. Keep in mind that it doesn’t matter if your frozen food is organic or not – the possibility of listeria comes from contamination in the plant. With 42 brands on the list, chances are that if you have frozen fruit or vegetables in your freezer that you did not package yourself, it’s potentially tainted food. Doesn’t it seem like these recalls are happening a lot more often lately in the industrialized food business?

But when you go look at that article, there’s one more thing you should notice and that is the illusion that you have many different brands to choose from. 42 brands are on the recall list – but all of those brands are the same foods from the same plant.  That means when you’re standing there comparison shopping at the frozen food counter,  you aren’t really comparing anything but price on that particular day. The green bag and the white bag have the exact same contents, regardless of the fancy marketing. I don’t know about you, but that ticks me off and makes me even more committed to shopping at the farmer’s market and raising my own food.

If that isn’t enough to make you want to give up going to the grocery store for good, how about this? The FBI apprehended a man spraying a homemade poison mixture on food at three different grocery stores in Michigan. Law enforcement says that he hit three supermarkets (Whole Foods, Meijer and Plum Market) over the past two weeks, and it’s possible that these 15 other stores were likewise attacked. Kyle Andrew Bessemer, 29, has been charged with 4 felony counts of poisoning for spraying a mix of hand-cleaner, water, and mouse poison on produce and salads at the grocery stores.  No motive for the crimes has been disclosed.

How can you trust your food? Grow it yourself.

Did You Know That Congress Could Pick Someone Not Even Running to be the Next President?

You may have noticed that I’ve stayed out of the election hullabaloo this time around, because it’s nothing but theater.  However, this little tidbit is too interesting to pass up.

If you have been absolutely stunned at the crop of candidates for the highest “elected” office in the land, get ready to be even more surprised. But wait…it is entirely possible that neither the psychopathic killer (Hillary Clinton) or the wealthy narcissist (Donald Trump) will sit in the Oval Office.  If either of them win, nobody actually wins. If Hillary wins, all hell will break loose because she’s a criminal who ignored the folks in Benghazi and who has been accused more than once of being a stone cold killer. If Trump wins, all hell will break loose because he’s ticked off the immigrants, the women, and the Black Lives Matter people. Think riots like the ones in Ferguson, but on a national scale.

But it may not come down to that, and here’s why.

If neither Clinton nor Trump receives a majority of electoral votes (more than 270) then the 12th Amendment ensures that Congress will select the next President.  That’s right. Congress and Speaker of the House Paul Ryan, who just happens to have been the former running mate of a Presidential hopeful, could choose whoever they want to move into the White House. This is a move worthy of  the Machiavellian writers of House of Cards.

If you ever believed that your vote mattered – it doesn’t. This system has been devised from the very beginning to keep the establishment in power by any means necessary. There isn’t going to be any revolutionary victory by an independent candidate like Ron Paul or Gary Johnson. Not ever. Think about this primary and how delegates, not voters, were the ones who chose their state’s nominees. It happened more than once that the person with the most votes did not get picked by delegates, which means – if you took the time to vote, it was sadly, a meaningless gesture meant to give you the illusion that you have a choice.

This farce of a campaign is more like an episode of Epic Rap Battles on Youtube than anything else, and your opinion on it holds just as much weight.

Who do you think will pop up like a bad penny?  Mitt Romney? Jeb Bush? Someone else? I think it’s safe to say that with the way Washington does things, it won’t be anyone you’d actually want to be the President.

(Here’s an interesting open letter from a Nebraska senator about how dreadful this election really is.)

Just Because You Can, Doesn’t Mean You Should

If you’re a fan of AMC’s hit show, The Walking Dead, you might have wondered how the zombie apocalypse started. It was probably a mad scientist. Isn’t it always a mad scientist?

Right now, a series of experiments could be the trigger for a real life zombie apocalypse because the US government has approved experiments that would reanimate the brains of humans who are braindead.  They have all sorts of warm fuzzy reasons that they believe this is a good idea. They feel that this work can benefit those in comas, vegetative states, and victims of Parkinson’s and Alzheimers.

Scientists hope that their experiments can regenerate parts of the brain that no longer work. But has anyone stopped to think about exactly “what” will wake up? Will it be the same person, with the same memories, affections, and morals as before?  And what if it goes wrong and they increase the suffering of a human being who was initially trapped in a long sleep, and bring just enough awareness to make that person cognizant of his state? What if it goes wrong and what is regenerated is a brain that is closer to an animal state than a human one?

Just because you can do something, doesn’t mean you should. I certainly see this going South in a hurry. 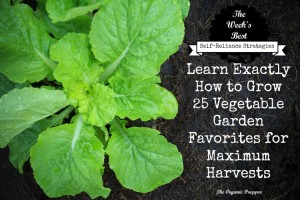 Prices of 10 foods that many folks consider staples are skyrocketing. (See which foods have dramatically increased over the past few months.)  It’s more important than ever to stock up on emergency supplies NOW, before prices rise even higher. Check out Prepper’s Market for non-GMO food from a small, family-owned company.

But don’t stop there. When you consider the information above about the tainted food, the illusion of choice, and the guy poisoning food at the grocery store, don’t you think it’s more vital than ever to grow your own food? I’m determined this year to have a bounty like never before. This week’s self-reliance strategy round up is all about the specifics of growing 25 different garden favorites.

Click here to check out this week’s Self-Reliance Strategies!

Do you have any news links you want to share? Now’s the time! What’s going on in your neck of the woods? Did you have any food in your freezer related to the recalls? Please join the conversation below.