Post-Election America: The World Marches On and So Must We 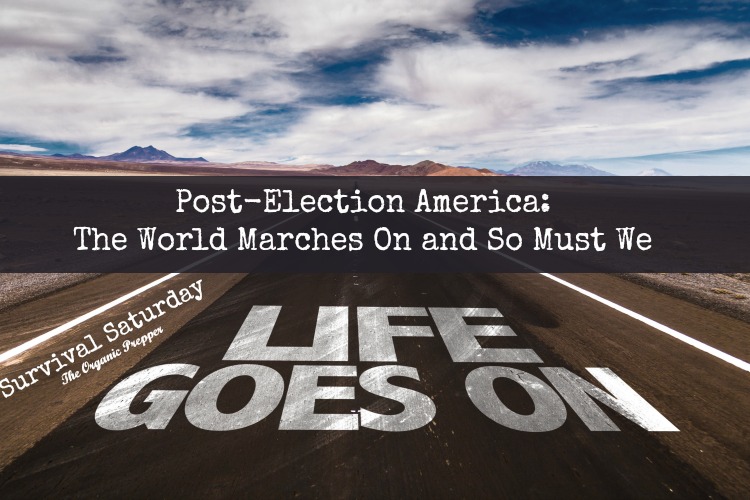 What we’ve seen this week is heartbreaking. The violence and rioting in the streets of America seem to continue escalating, and at this point, it doesn’t look like anyone who voted for Hillary Clinton is willing to give Donald Trump a chance to keep his campaign promises.

This isn’t the way, folks. Regardless of your thoughts on the outcome, we are still friends, families, neighbors, and co-workers. Things posted on social media are tearing friendships and families apart. One election should not end these relationships. Good people are becoming more divided when what we need is for these good people to unite.

Of course, not everyone behaving badly is a good person led astray. We are hearing of cases where parents have turned against their own children who voted for Trump in mock elections. There are violent riots and calls for death and assassination.Untold damage is being done to Americans at home and to our reputation internationally.

Most of the news from this Post-Election Survival Saturday round-up has nothing at all to do with the election. The world marches on, and so must we all.

By now, everyone has heard about the conflict regarding the Dakota Access Pipeline going through Native American land.

The good news is, this week, some law enforcement officials decided that their departments should not take part in the situation. Fifth Column News reports:

Sheriffs from Wisconsin’s Dane County were more empathetic, pulling out and refusing to return. According to the Bismarck Tribune, Sheriff Dave Mahoney made the decision after a “wide cross-section of the community” decried the deployment. “All share the opinion that our deputies should not be involved in this situation”, says Mahoney. Dane County’s deputies were deployed to Standing Rock for around a week. Sources report Dane County wasn’t involved in recent arrests, a string of which scooped up an alderwoman from Madison Wisconsin.

The sheriffs from Wisconsin were not alone, according to the same article from Fifth Column News:

In addition to the general retreat of departments, two officers have already turned in their badges in support of the protesters. North Dakota water protector Redhawk, MintPress reports, disclosed the revelation. The individual also pointed out “you can see it in some of them, that they do not support the police actions.” “Some are waking up”, they continued, “we must keep reminding them that they are welcome to put down their weapons and badge and take a stand against the pipeline as well.” Hints of shame could be seen in the faces of officers who confronted protesters as they blocked them from prayer grounds. As the protesters condemned officers, some of whom looked down or off to the horizon in shame.

Wouldn’t it be nice if everyone who shifts the blame to “just doing my job” would take responsibility for “just doing the right thing?”

Around the world this week

Since the American election and the aftermath of it weren’t actually the sunshine to the whole solar system, the rest of the world went on and did stuff. Here are some of the events of note that didn’t really make the news here in the US.

History Lesson: How the Civil War got started in the 1800s.

Here’s a brief history lesson on the Civil War. While most people think it was strictly about slavery, that wasn’t really the case. It was actually about state’s rights, economics, and cultural differences. A British history website gives a less biased overview (since history is written by the victors) and you’ll see some interesting parallels to our current situation when you read these excerpts:

By April 1861, slavery had become inextricably entwined with state rights, the power of the federal government over the states, the South’s ‘way of life’ etc. – all of which made a major contribution to the causes of the American Civil War.

By 1860 America could not be seen as being a homogenous society. Clearly defined areas could be identified that had different outlooks and different values. This was later to be seen in the North versus South divide that created the two sides in the war.

The South was an agricultural region where cotton and tobacco were the main backbone to the region’s economic strength. The area relied on exports to markets in Western Europe and the class structure that could be found in the UK, for example, was mimicked in the southern states…

…The North was almost in complete contrast to the South. In the lead up to April 1861, the North was industrializing at a very fast rate. Entrepreneurs were accepted and, in fact, were seen as being vital to the further industrial development of America…The North was also a cosmopolitan mixture of nationalities and religions – far more so than the South.

When South Carolina seceded from the Union on December 20th 1860, the first state to do so, it was a sign that the state no longer felt part of the United States of America and that America as an entity was being dominated by a federal government ensconced in the views of the North. Whether this was true or not, is not relevant as it was felt to be true by many South Carolinians. The secession of South Carolina pushed other southern states into doing the same. With such a background of distrust between most southern states and the government in Washington, it only needed one incident to set off a civil war and that occurred at Fort Sumter in April 1861. (source)

Does this sound familiar? We have urban areas with one culture trying to impose their way of life on suburban and rural cultures. This time around, the urban areas have been threatening rebellion and secession, but the general idea is very similar.

We need to find some common ground, and quickly.

This week, it’s essential to keep a sharp eye open as protests and civil unrest rock the country. The following articles and resources can help you to get prepared for an America that seems mired in chaos. Stay safe, friends!

Get Prepped With This Post-Election Chaos Checklist

How to Survive Civil Unrest and Riots

10 Last Minute Preps When a Disruptive Event is Brewing

How to Build a 30-Day Emergency Food Supply…Fast

A Mom’s Guide to Preparing for Civil Unrest

If you haven’t ordered emergency food yet, you might want to think about getting stocked up.

Are You Prepared for Lockdown? How to Stay Safe When Chaos Erupts in America

The Anatomy of a Breakdown

Civil Unrest and Riots: Why You MUST Be Armed to be Truly Prepared

Do you have any news links you want to share? Now’s the time! What is going on in your area? You are absolutely welcome to post your links in the comments below. Please join the discussion!

And stay safe, friends. This is an unpredictable time in our country.

Creating a More Self-Sufficient Garden for the Long-Term