Did We Somehow Miss It When the Apocalypse Happened? 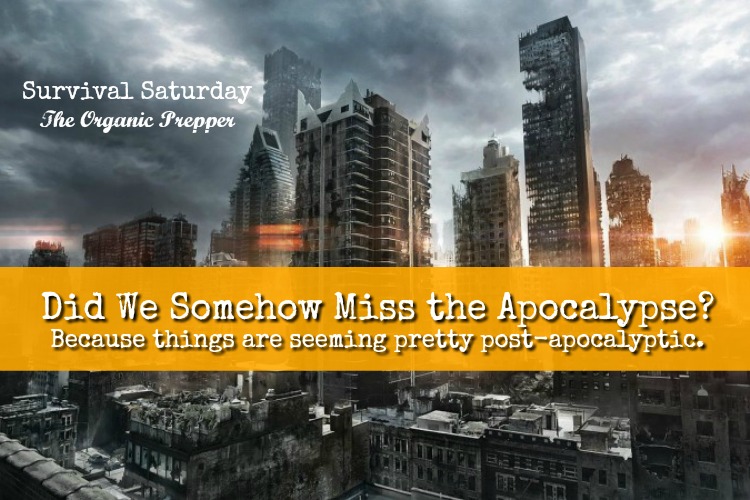 Maybe we’re already living in a post-apocalyptic society and we just missed the actual apocalypse part. I’m not sure how that could happen because we of the tinfoil crowd are always looking for signs of the crash. However, this week, the stories point toward a world with ever-increasing desperation, brutality, and nihilism.

If you haven’t signed up for the daily newsletter, please do so right here. You’ll get a library of downloadable copies of some of the most popular articles ever posted on the site that you can add to your resources.

Earlier in the week, I posted a video about a motorcycle gang chasing down a truck full of sugar in Venezuela and stopping it by lobbing grenades at it. As it turns out, that isn’t the only place south of the border with shades of Mad Max.

Zero Hedge reports on a new trend in Mexico:

…Illegally tapping into pipelines and stealing gas from Mexico’s state-owned oil company has morphed into a very well organized criminal enterprise, run by well-armed regional cartels and supported by distribution on a commercial scale to factories and petrol stations…

…Pemex workers and local villagers paint a surreal scene of the carnage left in the wake of this relatively nascent criminal enterprise which includes 1,000’s of abandoned “Max Max-style” vehicles and gasoline literally flooding entire fields after pipeline taps are drilled and then simply abandoned once tanks have been filled. (source)

And speaking of the brutal devolution of civilization…

Then you have the scene in the UK this week, with a couple of guys on a moped whipping around London and flinging acid in the faces of 5 people who were just going about their business. Two boys, ages 15 and 16, have been arrested for the spree of attacks.  According to one article, while this was the worst series of attacks, acid attacks in Great Britain have been becoming more and more common.

The people carrying out these attacks are willing to cause excruciating agony and life-altering, debilitating injuries, in many cases to complete strangers. What does this say about their mental states? And what does it say about society that this has become widespread?

Japan wants to dump a bunch of radioactive waste in the ocean.

The Fukushima disaster of 2011 is far from over. Now, Tepco, which is charged with decommissioning the nuclear power plant that overheated after the biggest earthquake to ever hit Japan sent a tsunami barreling into it, has come up with the “perfect” solution for all that nuclear waste.

First, let’s backtrack. 300 tonnes of nuclear waste has been “leaking” into the ocean every day and Tepco tried to cover this up. Now, they just want to say, “to heck with dribbling it out, let’s dump it ALL into the ocean.” They say that it will be safe to dump 770,000 tons of highly radioactive water into the Pacific because it will be immediately diluted by the massive size of the ocean.

Oh, and it’s not open to discussion.

Takashi Kawamura, chairman of TEPCO, told local media “The decision has already been made.” (source)

Not only will this devastate the fishing industry that was just beginning to revive off the coast of Japan (ummm, not in a million years would I eat fish from there anway, but some people don’t mind it) but doesn’t it seem like this would affect every Pacific Coast? Let me refresh your memory with some data about the radioactive effects on the US back when the event originally occurred:

Less than two weeks after the tsunami and subsequent nuclear disaster, Michael Kane, an investigative journalist, reported, “In the wake of the continuing nuclear tragedy in Japan, the United States government is still moving quickly to increase the amounts of radiation the population can “safely” absorb by raising the safe zone for exposure to levels designed to protect the government and nuclear industry more than human life.”

The radiation reached the shores of North America.  Water samples from across the continent have tested positive for unsafe levels of radioactivity.  The levels exceeded federal drinking water thresholds, known as maximum contaminant levels, or MCL, by as much as 181 times. This means that the complete ecosystem of the Pacific Ocean is now poisoned with radiation and we aren’t being warned.Samples of milk taken across the United States showed radiation at levels 2000 percent higher than EPA maximums.  The reason that milk is so significant is that it is representative of the entire food supply.  Cows eat grass and grain, which are exposed to the same elements of our own crops and water supplies. So when their milk begins to display high levels of radiation, it is an indication of the radioactive contamination of the entire American food supply.

The FDA and the EPA, instead of refusing to prohibit the sale of tainted foods and mandatory testing of foods produced and harvested from the Pacific Coast, simply raised the “acceptable levels”  of radioactive material in foods.

Look for these levels to spike yet again and for another one of those creepy marine life die-offs if this horrible idea is brought to fruition.

This week, I would like you to consider that the anger and desperation seem to be building across the globe. It’s bound to peak. I don’t know where or how this will happen, of course, but I urge you to focus on these things:

This doesn’t mean that I want you to grimly proceed through the steps above.

Changing your mindset can be positive and freeing. Getting prepared is the ultimate act of optimism.

If you don’t owe a lot of money and don’t spend a lot of money, then if something were to happen to your income you wouldn’t be in as dire a situation as you would if every dime is accounted for before you even get it. If you have supplies, you have peace of mind that you can survive a change in circumstances. And if everything changed tomorrow, you can look back and say, “I did everything I could to prepare for this and care for my family.” Then, you can proceed without regrets and use the skills you’ve spent all this time learning to continue to do so.

I’ve personally made a lot of changes over the past six months to reduce our expenses and make our lives simpler. We moved across the country to a more permissive state with a far lower cost of living. We sold an expensive vehicle and got one that was a fraction of the price. We paid off our debts. We have less property to care for but are still able to produce all sorts of lovely homegrown food. We scaled everything down and I couldn’t be happier.

I realize not everyone can just pick up and relocate, but think about where you might be able to make some changes. Every burden you put to rest will lighten your load and your stress levels will plummet.