Survival: Backwards and in High Heels 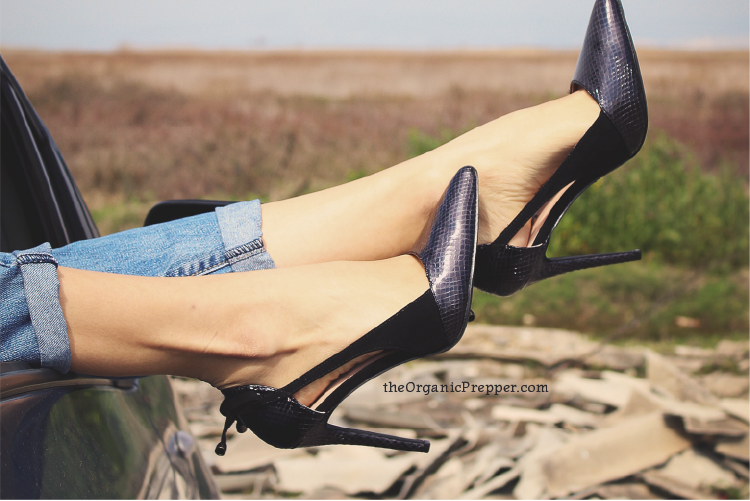 I honestly can’t be the only woman out there who thinks of these things.

As a woman who is also a prepper did you ever stop to think about the handicap that your footwear might present in a survival situation? It always brings to mind the old quote about women who are ballroom dancers: they do everything that men do, but they do it backward and in high heels.

If I happen to be running away from a serial killer or the Golden Horde, I’m not gonna lie – I don’t want to do it backward and in high heels. I’d really prefer to be wearing a nice, comfy hiking boot or a pair of Nikes. 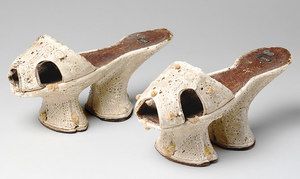 According to some anthropologists, the original purpose of high heels was to keep women from straying or escaping the harem. In the 1400s, chopines, or platform shoes, were created in Turkey and were popular throughout Europe until the mid-1600s. Chopines could be seven to eight or even 30 inches high, requiring women to use canes or servants to help them walk. Like pattens, chopines were overshoes, but unlike the pattens, chopines were worn almost exclusively by women (Rexford 2000). They were usually designed with cork or wood stacked as the heel.

The Venetians made the chopine into a status symbol revealing wealth and social standing for women, and tourists to Venice often remarked humorously on the outrageously high chopines. One visitor noted that they were “invented by husbands who hoped the cumbersome movement [that] entailed would make illicit liaisons difficult” (McDowell 1989).

We can already see issues of domination and submission being associated with shoes, much like China’s lotus shoes. Indeed, Chinese concubines and Turkish odalisques wore high-heeled shoes, prompting scholars to speculate if heels were used not only for aesthetic reasons but also to prevent women from escaping the harem (Kunzle 2004).

Source: The history of high heels — from Venice prostitutes to stilettos

But, you CAN survive even in high heels, right?

Long before I ever contemplated prepping, I read an article about a woman in her 20s who had been kidnapped. She escaped from her kidnapper in the forest and had to make her way through miles and miles of brush, running, in high heels. She fell, of course, and twisted her ankle, at which point she broke off the heels of her shoes and hobbled onward. She survived to tell the tale, but the concept of wobbling through the forest in stilettos never left me.

Now, don’t take away my “chick card” when I confess this – a beautiful Manolo makes my heart go pitter-patter as much as it does the next woman – but I’m really more of a Doc Martens or Palladium army boot kind of girl. As someone who lives a nomadic lifestyle, I own just one pair of heels for funerals and dates. (Generally, these are not the same event.)

In a survival situation, you could be called upon to walk a great distance over uneven terrain. You might be required to run for your life. You could be in a situation in which you must evade someone who would do you harm. There might be snow or mud up to your knees. You might be doing all of these things while carrying a small child.

If you are a survivor (which you are, or you wouldn’t be reading this website) you will grit your teeth and do what you have to do, no matter what happens to be on your feet. But, running, walking, crouching, jumping, climbing, or hiking: all of these would be a whole lot easier in practical footwear.

During a survival situation, it’s interesting to note the things that stick in people’s minds. We can learn from the odd little tidbits they report after the fact. While surviving in high heels is difficult, it can be done if you are determined and adaptable, as the following stories confirm.

A champion athlete from Norway recounts her long walk for help after escaping her submerged vehicle. After her car plunged 20 meters into an icy fjord, Ellen Annette Gutubakken cheated death by slinking out of the plunging vehicle, swimming ashore, and trudging through a snowstorm in high heels.

Having spent some time working on offshore rigs, Gutubakkken said she was used to being underwater. She climbed into the back seat and out through the boot. “I was pulled down by the undertow but managed to make it up to the surface.”

She had cleared the first stage of her great escape but still knew she needed to act fast to avoid hypothermia in her drenched dungarees and a thin sweater. First, she climbed gingerly up the steep stony bank in her high heels, testing every rock along the way to ensure she didn’t lose her footing. When she reached the top, she felt elated but knew she wasn’t yet safe. The road was desolate, snow flurried, and fell, and she couldn’t tell where the nearest houses lay.

First, she walked in one direction but soon changed her mind and turned around. Swinging her arms like windmills to stay warm, she wandered into a pitch-black tunnel. ” I started to feel my way along the wall but suddenly I noticed there was a ditch at the edge. I had to go by sounds, with my arms stretched out in front of me,” she told Stavanger Aftenblad.

More tunnels awaited, and she counted them all to ensure she’d be able to trace her steps back to the point where she’d driven off the road, she told the newspaper. After walking for around three kilometers, she saw lights in a house on a steep hill above the road. (Source)

Another woman regretted her choice of footwear when she was kidnapped in Africa.

Julie Mulligan of Drayton Valley, Alberta, concedes she maintained a high profile while leading a Rotary Club exchange trip to Kaduna, Nigeria, in 2009. She appeared on a local TV show, and soon after kidnappers dragged her out of her host’s car. Held nearly two weeks, hobbling around on the high heels she wore when snatched, Ms. Mulligan “had some really dark moments.” (Source)

While these women proved it can be done, it’s a pretty sure bet they would have greatly preferred comfortable, sturdy footwear.

Many travel safety websites recommend not wearing high heels if you are going to be flying. In the event of a crash, not only would heels make walking through debris more treacherous, they could puncture the inflatable escape slides.

The Boeing website recommends practical footwear. “Opt for closed-toed shoes with secure laces or straps. Leave the flip-flops, sandals, or high-heel shoes in your luggage. In fact, high heels can puncture an escape slide. In an emergency, you’ll be asked to remove high heels.” Also, can you imagine walking barefoot through the debris of a crash?

From a survival point of view, it’s always recommended to stash a pair of sturdy walking shoes in your vehicle and in your “get-home bag”. But there are some situations in which that might not be enough. If you are involved in an automobile accident, you might not have time to access the bag in your trunk, as in the example above where the athlete’s vehicle was submerged. I always wear sensible shoes while driving and slip on my party shoes when I arrive at my destination.

If you were assaulted, I feel safe in guaranteeing you that a polite request for your attacker to wait while you don practical shoes would be denied. Part of preparedness is always being ready for even the most unlikely event. Footwear that allows you to move quickly and without the risk of injury is vital.

What can you do when caught in a survival situation, wearing heels?

Despite our best efforts to be prepared, there’s always the possibility of a sudden emergency occurring when we’re wearing less-than-practical footwear. So what can you do?

The will to survive regardless of your circumstances is more important than the shoes you are wearing. With the right mindset you can overcome all manner of preparedness shortfalls. We don’t always get a warning before disaster strikes, so don’t beat yourself up. Improvise, adapt, and overcome!

Think before you buy

Just because a shoe is flat, by the way, doesn’t mean that it’s a good bet for survival. Some of the dainty little ballerina flats out there have such thin, flimsy soles, that they are only slightly better than fuzzy slippers.

Look for shoes that are comfortable, sturdy, and supportive. Some athletic stores sell relatively attractive shoes that are engineered for walking. Skip the flip flops and opt for a sport sandal that will actually stay on your foot, minus the irritating piece that runs between your toes and nearly always yanks out of the sole of the shoe.

The next time you see a gorgeous pair of shoes and think that you might die without them, maybe you ought to think about dying because you wore them. 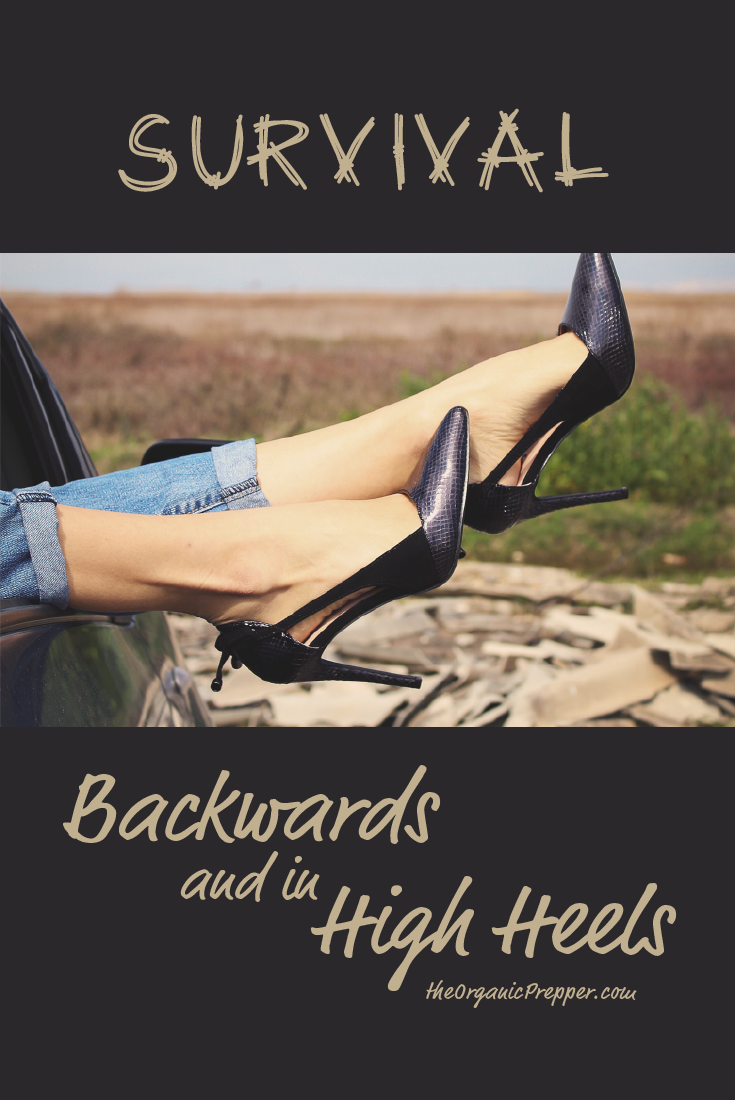