GET OFF MY LAWN: Suburban Defense Starts with Keeping Intruders Off Your Property

Note: This is an excerpt from my non-fiction book Suburban Defense: A cop’s guide to protecting your home and neighborhood during riots, civil war, or SHTF.

Get off my lawn

Since 2020 was the year of the riot, some that spilled over into suburban residential neighborhoods. In times of unrest to SHTF, groups of intruders large and small will be a problem for you. You should also be concerned about the burglar who hopes no one notices him coming up the walk.

American suburbs are just the kind of thing any army of bad guys would want to see from the Romans tearing Carthage down to Genghis Kahn and the Mongols sweeping into Europe. Freeways turn into wide, arterial streets that feed neighborhoods built mostly on a grid pattern. Our streets, let alone the individual lots, are very rarely defensible. In many neighborhoods, rural or urban, there is nothing stopping a bad guy from walking right up to a house.

Our modern homes are flammable, not bullet resistant, weak, and filled with lots of easy access points. Examine the structure of your home. Bullets easily penetrate most suburban construction and burglars commonly exploit windows, doors, and locks. For most Americans, anyone can simply walk up to your door without any sort of gate or other obstacle stopping them. It’s time to change that.

The ideal battle is the one that is never fought

The same goes for the forced entry that never is attempted. By taking simple steps you can enhance the likelihood that an angry mob, burglars, looters, or bandits will simply pass right by for an easier target. With preparation and some luck, your house’s windows and locks will never be tested. We start with the principle that layered security is the key and the first layer is your yard.

Passive defense is anything that makes it difficult or less desirable to enter your property.

All of these things discourage entry either by the danger of apprehension or materially making access difficult. Even signs and cameras signal that you are paying attention to your defense, which incentivizes a bad guy to find someone less aware. Remember, we’re exploiting psychology and laziness here.

Keeping them off your lawn, the front yard

If you have an open lawn up to your house, large crowds fanning out across the street will treat the open ground as a thoroughfare. Even if the person/group is just passing through, wouldn’t you rather have them do it thirty feet away instead of just outside your windows? What kind of mischief might they get up to if they had the temptation of the home so close?

This is basically crowd control. People take the path of least resistance. If cops don’t want people walking in an area, they put up those metal barricades because people don’t want to deal with jumping them. Deterrence is easy and mostly psychological in many cases.

People tend to stick to paths even if the adjoining ground is just as easy to walk on. It serves as a guide for them. They might not even be aware of the effect it’s having on their subconscious navigation. Angry mobs might unconsciously pass by and target the house with no protected yard and not even realize that they made that decision.

Defensive landscaping doesn’t have to be ugly

Ideally, you would want to set up a sturdy fence with thorny plants (like roses) for several feet in front so any jumper lands in thorns. That idea might not work due to design, space, taste, or local codes. You can keep your lawn, but maybe if you don’t want a fence, rip up a two-foot section of grass along the sidewalk, put in some large decorative rocks, and then plant roses in between. 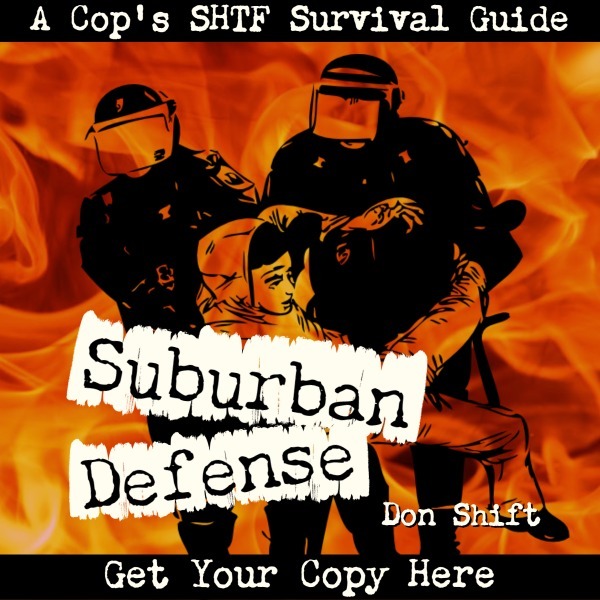 Using the idea of psychology, you could build a landscaped funnel through a path to the front door. Instead of someone cutting up the side of your yard, give them the obvious path where it is to your advantage (where you can see them from the window or where your cameras are). That way, if someone wants to sneak, they’ll have to navigate the landscaping and will stick out like a sore thumb going through the roses for no good reason.

While we’re on the topic of landscaping, don’t create areas for bad guys to hide. Rose bushes are great because generally you can see a person hiding behind them. A dense hedge could entirely conceal a bad guy who could be crouching on the sidewalk with a rifle ready to shoot you the moment you open the front door. You want to be the one behind the bushes ready in ambush.

Securing the driveway is more of a problem. The new trend in super dense housing tracts are driveways too small to actually park in. In older homes or pricier developments, the driveways can actually park cars. Some homes have yards where a simple chain can be stretched across the driveway. Other tracts were built so the only way to secure the driveway would be to build a fence and install a long gate across the two-plus car drive. Again, not something you really see outside of the inner city.

Low fences are about deterring people; not keeping people out

Fencing and landscaping can funnel people into areas where they might be faced with a real gate. This gate might secure your front courtyard or it might be your security screen on your front door. An open lawn creates a wide path to the front door; a single gate from the driveway to the front walk makes only one access point.

One final tip for keeping people out of “denied” areas: motion-activated sprinklers. Usually, these are to scare deer out of gardens, but just imagine the surprise a miscreant would get when suddenly, out of the dark, there is a hiss and a jet of water soaks them until they run away. The sound of the sprinkler or a surprised yell might also alert you. It’s enough to either buy you a few seconds or convince the unserious to go elsewhere. In-ground sprinklers can also be turned on as a mob approaches to create a soft denied area.

Keep vehicles from driving through your yard

If you are concerned about vehicles driving through your yard, several different approaches can be adapted to stop them. Strategic placement of decorative boulders of several hundred pounds about two feet tall will stop most cars, assuming they can’t squeeze through. The same applies to concrete-filled flowerpots. Block walls that have a concrete foundation and are rebar reinforced can also stop vehicles.

Looking for more ideas to protect your suburban home?

Don Shift is a veteran of the Ventura County (CA) Sheriff’s Office and is a student of emergency response, disasters, and history. He is the author of several post-apocalyptic survival novels about nuclear war, EMP, and the non-fiction Suburban Defense guide.

Name Your Price for Our Thrifty Christmas Book!

Scavenging: It’s Not Just When the SHTF. It’s Already a Way of Life for Many.