Do you think you’ve got money problems? A guy with the username Slavikfill posted on Reddit of his and his wife’s struggles to make ends meet on their combined gross income of …ummm….half a million dollars a year.

Now, it’s easy to look at that and laugh and write them off as morons. But think about it. It’s very common when people get raises or their income increases, for them to also increase their living expenses to that level. This is an extreme case but it portrays the very common problem of a family unwilling to live beneath (not within, beneath) their means.

The good folks of Reddit gave no quarter when Slavikfill posted his budget. After a few hundred posts advising him that he was handling his money unwisely, he vanished and the post was removed as per Reddit rules. But Marketwatch captured the budget and I’ll post it here. 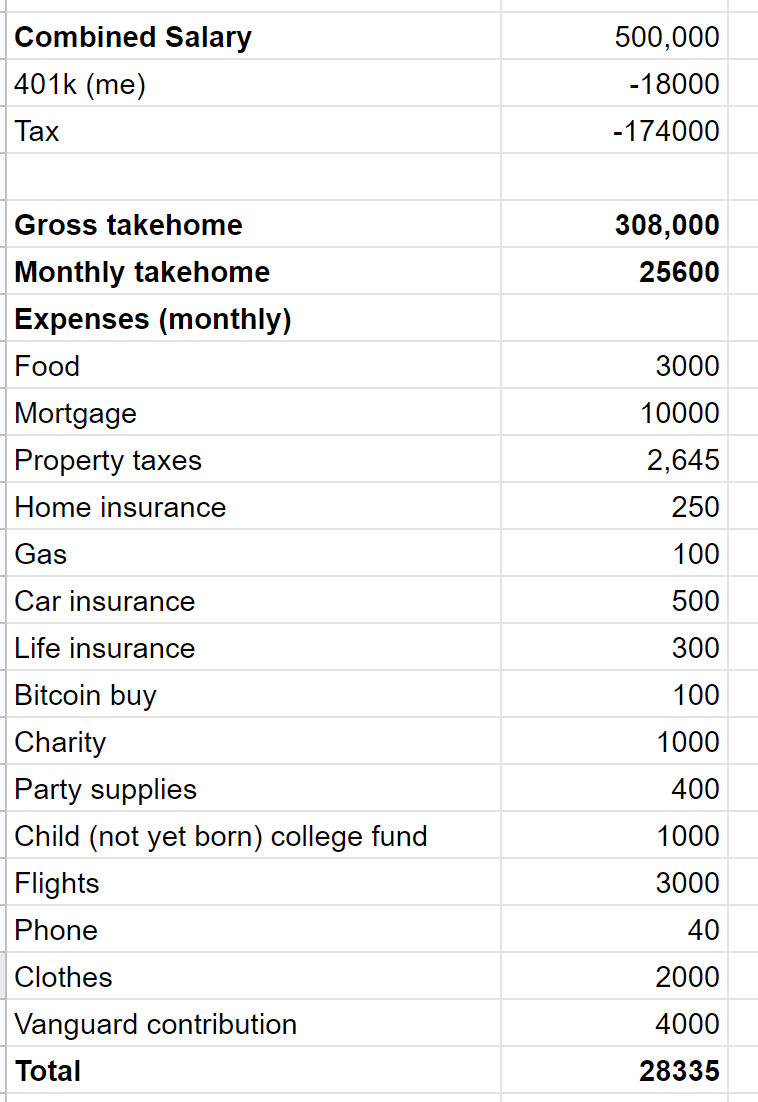 Before we launch into the obvious problems, they’re doing a few things right. They’re contributing almost $20,000 a year into a 401K, $4000 monthly into another retirement account (the Vanguard contribution), and putting back a thousand a month for a yet-to-be-born baby.

They’re investing a nominal $100 a month buying Bitcoin and their phone bill is an exceptionally reasonable $40 a month.

The most obvious issues

First, let me point out that taxation is theft. I can’t let that opportunity slip by, obviously. Next, let’s look at the most obvious issues.

These folks live in Kansas, so a mortgage of $10,000 a month must be buying them a veritable mansion. Using a mortgage calculator, I estimated that their house probably cost 1.4 million dollars or more, depending on their downpayment. As per the listings in that price range on Zillow, that’s practically a mansion in Kansas. Step one would be, if possible, to get a more reasonably priced house.

I say “if possible” because they may be upside down in the mortgage on a house of that value, so they might not be able to sell it without a loss. But even selling it at a loss might be worthwhile to get out from under the 5-figure mortgage payment, the $250 a month on insurance, and the $2645 monthly tax bill. There are loads of families in the US who live for an entire year on what they pay monthly just for their house. If they’re serious about getting out of their financial quandary, that house must GO.

They don’t mention a car payment, so maybe they paid outright for their vehicles. Either they have high-risk vehicles like sports cars, super expensive vehicles, or have had a bunch of speeding tickets.

Then we get to the easy-to-cut frivolity. Sorry, friends, but you don’t need to spend $3000 a month on food, $2000 a month on clothes, and $400 a month on “party supplies.” (Does that mean booze?) If they cut each of those in half, they’d still be eating, dressing, and drinking far better than 98% of the rest of us.  Where on earth does one fly for $3000 a month? Clearly it’s not a business expense or it wouldn’t be in their personal budget. STAY THE HECK HOME FOR A WHILE. Or do road trips. Or something.

This is an extreme example

This is an extreme example that’s easy to laugh at, but I know that I myself have been guilty of getting a windfall and splurging on a too-expensive vehicle. Lots of people get a raise and increase their living expenses to what they’re now earning. It’s all well and good when things are going well, but if something goes awry, there you are, stuck with that more expensive house and more expensive car.

If nothing else, Slavikfill and his wife are a cautionary tale on a grand scale of what happens when you buy a house at the top of your mortgage range and when you spend every dime that comes in. Struggling financially in an inexpensive state like Kansas on half a million dollars per year can only occur after a series of very bad and frivolous decisions.

If they should lose any of their income – like when that baby with a college fund that matches my rent arrives and maybe Mrs. Slavikfill takes some time off work – they’re suddenly going to run into a lot of problems running their household. If they lost a bigger portion of their income – if Slavikfill got fired, for example – then they’re doomed. Imagine living like a rock star and then suddenly having to live like the rest of us plebes. That would be a pretty tough pill to swallow.

Here’s how to fix it.

I doubt Slavikfill will read this, but here’s my advice to you, sir, in point form. You can fix this.

By just taking these three steps, you’ll change your life. You’ll save at least $156,00 and probably more. You won’t struggle anymore, you’ll be able to build an emergency fund, and you’ll mercifully have some breathing room each month. Even at your income level, the way you live right now means that you are one missed paycheck away from financial disaster.

Struggling financially is no way to live. If you make $500,000 a year and spend $500,0001, you are operating a loss. Your loss may look a lot fancier than the rest of ours, but it’s a loss nonetheless, and those almost always end badly.

Name Your Price for Our Thrifty Christmas Book!

Scavenging: It’s Not Just When the SHTF. It’s Already a Way of Life for Many.