The 4 Stages of the Collapse of Venezuela 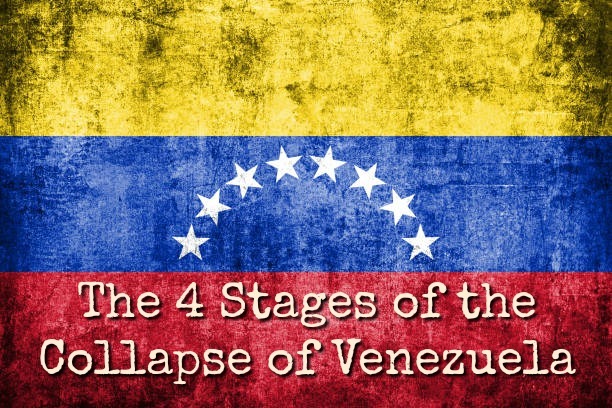 When looking back at the collapse of Venezuela, I see that nothing there happened which was new. As many other countries that have experienced similar circumstances can attest, we went through 4 stages of collapse.

The first stage was the exile, voluntary for those outstanding opposition members of the political world, and that could foresee and feel the first impacts of the delinquent mafia.

These are politicians that understood exactly what the taking over the Supreme Court in 2015 was about: a seizing and power consolidation upon the occupation of the Justice system, subordinated to the President figure. This would block any further attempt of judging the politicians of the Socialist Party, and anyone who collaborate with them, no matter the crimes committed.

It is very likely that they had first-hand information, and they knew what was about to come. They tried to warn what was coming up to the entire population. Some still do it, like Pablo Aure, or the journalist Braulio Jatar (prisoner at home and can´t make public statements) and the journalist Tamara Suju, and they received the first threats, the first incarcerations, and even political participation prohibitions were given. Possible opposition candidates like Leopoldo Lopez and Capriles are no longer an option: they were totally sold and corrupted. (Capriles received money from Odebrecht bribes, according to the CEOs statements)

The second stage was the upper-middle-class migration.

Those professionals who could slowly see their life quality diminishing, and albeit having their properties and extended families, decided to flee away. Given the good level of education (many of them with 4th level studies) they could go through the process without too much of a struggle.

After all, this has happened in a lot of countries, and we were not the exception. Fortunately, the free college education (something that differentiated Venezuela from other countries in South America) allowed access to third level studies to those who really appreciated them, and with the needed financial capability and endurance to finish them and become professionals (usually with help of the entire family).

A lot of medicine, healthcare, engineering, and law professionals come from the lower middle class, just like myself and almost my entire extended family. There are a lot of stories about the grandma having to sell “arepas” in the streets, or cleaning houses and offices, just so their sons and daughters could become factory laborers or medium level technicians, and their descendants could become MDs, lawyers, and engineers.

The oil revenues, invested in good education in the 80s and 90s decades was one of our strengths. However (remember the so-called “Cultural Revolution in China”?) after the leftist wing took over the country, this changed drastically. The resources for universities and state-sponsored educational institutions were cut off. The salaries for the education professionals are a joke, as are most of the salaries of the working class.

The implantation of the leftist doctrine in the army educational institutions permeated and undermined the republican education, allowing a “revolutionary” influence that has resulted extremely toxic for the moral and ethical values that our armed forces once had. The respect for our Constitution no longer exists, neither, in the Army. In the name of the so-called “Revolution” that no longer exists but in the shallow, empty words that compose the increasingly weaker, arrogant (and now desperate) speeches of the mafia expositors, our Constitution has been stepped on, torn, and violated an overwhelming number of times.

The dissidents, like me, that once realized where this was really going, are now the majorities, and these are being subjugated by hunger and disease. Most of the military officers are now under a strict surveillance by the intelligence organizations, and perhaps some others that we don´t even know.

The disassembly of the antique republican army structure is already complete, with young, illiterate officers with medium-high ranks but without any formal instruction to deserve them, and total impunity. Ranks are for providing “authority”, getting throughout posts without being checked, and imprisoning people without a court order. And of course, this is illegal, but they do it anyway. Before Hugo´s mess, send someone to prison was not so easy. These days, people have been in jail just for tweeting how p***d off they are with the mafia. This can be verified in the social networks such as Twitter and Facebook.

It was not my intention to write a merely political article, but here it goes. The consequences of this political mess is what has kicked us out of our country.

This is incredibly painful for me, as the third stage seems to be starting: taking the private properties off the hands of the unarmed owners. In Villa Rosmini, Maracaibo city, Zulia state they demolished the gate of a subdivision with a payloader when the neighbors refused to allow in the police and the thugs.

There was not even one shot at the “authorities” destroying private property: they were there protecting to the operator of the payloader.

It is the third stage, collecting information for the communist mafia that will propel the next. When they go home after home in the 4th stage, they will prepare concentration camps for the dissidents, as it already happened in Russia and China.

I knew this was going to happen, after witnessing Uncle Hugo seizing buildings in the center of Caracas, to “assign” them “to the poor”, whoever these guys were (We hurried up to get our passports shortly after that, just in case, go figure).

Many people laughed at me. Now they don’t. Especially those who could not leave the country.

I can’t believe I am writing about this right now. But I do know that sometimes the reality overcomes our wildest fantasies. Albeit I have never been a very religious man I can’t avoid to notice His intervention in my life, and I truly give thanks every day for all my blessings.

Venezuela is a failed state

It has started slowly, but the paint on the wall is there, fresh and dripping all over the place. The mafia has made of the State a failed one, has looted our national wealth, imprisoning those who opposed to this with violence and generated a constant terror in the citizens. This is a technique carefully used in those left (and Nazis) totalitarian governments, with a modern twist, if you want.

International sanctions work against them, to a certain degree. But this is not enough. Destroying a gate with a payloader just because the neighbors don’t want their subdivision filled up with thugs, living next to their kids and elders…that is a very different fur of an animal. This is a total lack of respect for properties and people. This deserves to be punished, and very severely. It is an open intimidation.

It is a crime against our Constitution and the rights that once were guaranteed by it.