Now, Refrigerators Are Watching Us Too – “Smart” Coolers Are Coming to a Store Near You 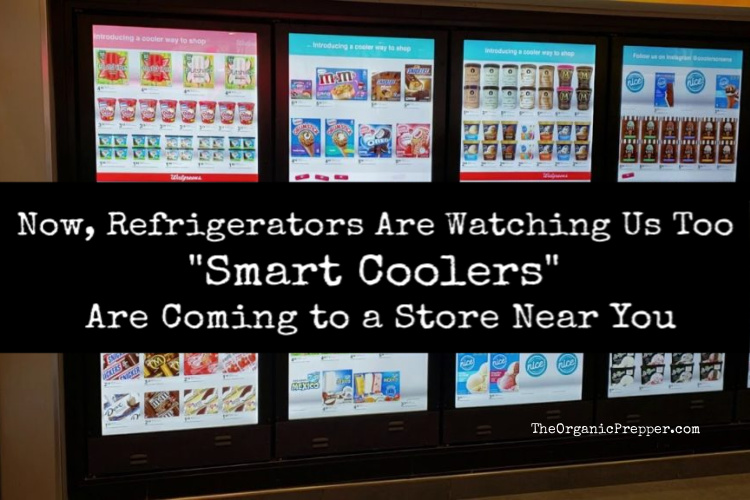 If you’ve been feeling like you just don’t have enough “smart” devices spying on you every day, I have great news. “Smart coolers” may be coming to a store near you.

Years ago, you would have sounded like a lunatic if you said that a refrigerator was watching you. But, like other new technology, yesterday’s serious mental health symptom is today’s reality.

Walgreens is piloting a new line of “smart coolers”, which are refrigerators equipped with cameras that scan shoppers’ faces and make inferences on their age and gender. On January 14, the company announced its first trial at a store in Chicago. The drugstore chain plans to put the coolers in stores in New York, Seattle, and San Francisco by the end of January.

Walgreens is getting paid to install smart coolers.

So far, 15 large advertisers have signed up to test the Cooler Screens platform, including Nestlé SA, MillerCoors LLC, and Conagra Brands Inc.  While Cooler Screens is currently only in Walgreens stores, the company is looking to get their product in additional chains as well.

The technology embeds cameras, sensors, and digital screens in cooler doors, creating a network of “smart” displays that marketers intend to use to target ads to specific types of shoppers, explains The Wall Street Journal:

The refrigerator and freezer doors act as a digital merchandising platform that depicts the food and drinks inside in their best light, but also as an in-store billboard that can serve ads to consumers who approach, based on variables such as the approximate age the technology believes they are, their gender and the weather.

This new technology could provide brick-and-mortar stores with a marketplace similar to online advertising. Ice cream brands could duke it out to get the most prominent placement when it is 97 degrees outside; an older man could see ads for different products than a younger woman. (source)

In Now Your Groceries See You, Too, Sidney Fussell writes of the technology:

Crucially, the “Cooler Screens” system does not use facial recognition. Shoppers aren’t identified when the fridge cameras scan their face. Instead, the cameras analyze faces to make inferences about shoppers’ age and gender. First, the camera takes their picture, which an AI system will measure and analyze, say, the width of someone’s eyes, the distance between their lips and nose, and other micro measurements. From there, the system can estimate if the person who opened the door is, say, a woman in her early 20s or a male in his late 50s. It’s analysis, not recognition. (source)

So, wait a second here – the camera takes photos of people and analyses them, but because this isn’t actual “facial recognition” there isn’t anything to worry about?

I’m not buying it.

Here are the minute details that smart coolers record.

Cooler Screens also has “iris tracking” capabilities, meaning the company can collect data on which displayed items are the most looked at.

Most the reporting on this technology is downplaying another detail that should be raising eyebrows: The Cooler Screens website states “We believe brands should be able to measure the performance of media buys in real-time.”

It sounds like what they really mean is “brands should be able to spy on shoppers.” Advertisers think nothing of invading our privacy if it means they’ll make more money. Remember when we showed you how your smart device was tracking every move you made in real time?

Arsen Avakian, Cooler Screens co-founder and CEO, wants us to know that our data is safe:

Haven’t we heard this line before?

Walgreens has made another unsavory alliance.

This isn’t the first questionable alliance Walgreens has recently formed. As pointed out by MassPrivateI, the chain has allowed Microsoft access to patient information. On January 15, the Associated Press reported:

The companies said Tuesday that they will work to improve care in part by using patient information and the Walgreens store network. The companies will aim to boost prescription adherence, cut down on emergency room visits and decrease hospital admissions. (source)

The report makes no mention of HOW Microsoft will be accessing private data, other than saying it will be done via the “Walgreens store network.” It seems like customers would have to give permission for their personal information to be shared in such a way, but who knows?

By the way, Microsoft is a Cooler Screens investor.

Do we really need to be barraged with MORE advertising and more invasion of our privacy? How long until every aisle of every store is equipped with mind-reading technology?

Will commercialism and corporate branding eventually take over every aspect of our lives, as it did in the dystopian comedy Idiocracy?

What do you think about Walgreens using this technology? Would it bother you to shop from a smart cooler? If it comes to your region, will you avoid shopping at stores that spy on you?