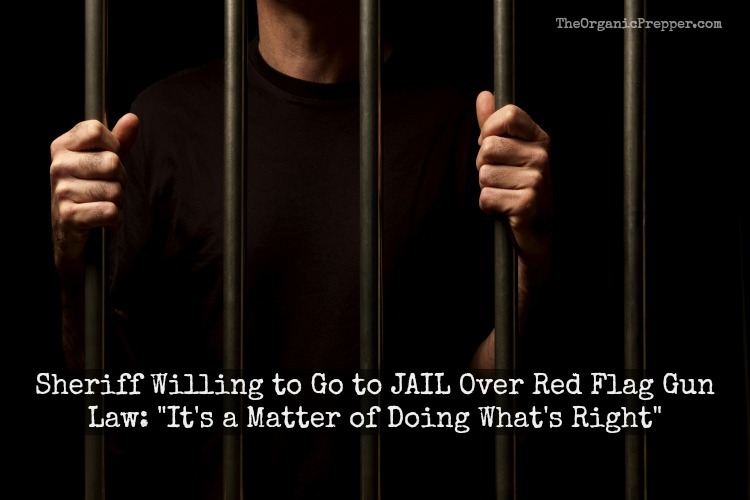 A Colorado sheriff has stated that he opposes a proposed new gun control law so much that he is willing to go to jail rather than enforce it.

Here’s a bit of background on the bill Reams is referring to. It is likely to become law this week.

The law Reams says he will not enforce is a red flag gun confiscation law.

House Bill 19-1177, also known as a red flag bill or the Extreme Risk Protection Orders bill, passed the Colorado Senate 18-17 on Thursday and is scheduled Monday for the House floor. With Democratic majorities in both chambers, state Republicans have too few votes to stop the bill.

Last month, we reported that legislators and sheriffs in the state have been pushing back against the bill:

Officially called Extreme Risk Protection Orders (ERPO), “red flag” laws permit police, healthcare providers, or family members to petition a state court to order the temporary removal of firearms from a person who may present a danger to others or themselves.

Weld County recently joined the growing list of counties in Colorado that have passed Second Amendment Sanctuary resolutions in response to the impending red flag law.

For a full analysis and critique of this bill, give this a read: Kopel and Greenlee: Plenty of red flags in Colorado’s ‘extreme risk’ protection order bill. (source)

We also reported that Reams (among others) is in opposition to the bill:

Commissioner Barbara Kirkmeyer, one of HB 19-1177’s harshest critics, said “The severity of this bill cannot be overstated. The name of this bill is the Extreme Risk Protection Orders. I think that’s a façade, and I think it’s fraudulent. I think actually, this bill should have been titled: ‘The Extreme Order to Confiscate Your Firearms, Eliminate Due Process, and Violate your Constitutional Rights Bill.”

“The bill is so riddled with constitutional problems that it makes it hard to understand how professional lawmakers could have constructed something so terrible,” Reams said, adding the bill, “raises some serious concerns about due process, in that a person can have their guns taken away and their rights violated, all without ever having a chance to appear in an initial court hearing and cross examine accusers and witnesses in person. In legal terms, this is an exparte hearing.” (source)

Reams added that one of the biggest problems with the law is it does not address actual mental health issues – it only allows for guns to be taken away, leaving the person in the same position and without medical help. (source)

Sheriffs could find themselves locked inside of their own jails for refusing to enforce gun control laws.

Failure to enforce a court order to seize a person’s guns could mean sheriffs being found in contempt. A judge could fine them indefinitely, or even send them to jail to force them to comply.

He isn’t the only sheriff to voice opposition to red flag laws. A growing number of states, counties, cities, and towns are declaring themselves “Second Amendment Sanctuaries” and are refusing to enforce gun-control laws that infringe on the Constitutional right to keep and bear arms.

David Kopel, a constitutional law expert who has written extensively about gun policy in the United States, says he thinks the bill is generally a good idea but that he has serious reservations about how it is written, reports CNN:

“The gun ban lobbies are getting more and more extreme and aggressive,” he said.

The bill allows a judge to order a person’s guns to be seized before the person has a chance to appear in court. The bill does require a second hearing with the gun owner present to be held within 14 days, where the owner could make a case to keep the weapons — but if the owner is unsuccessful, a judge could order the guns seized for as long as a year.

Kopel said it would be difficult to prevent a nightmare scenario in which someone misuses the law to take guns away from a person they intend to target violently.

The burden of proof is low — “preponderance of the evidence,” which is the same standard used in civil cases, and a much lower bar than the criminal standard, “beyond a reasonable doubt.” (source)

Reams added that he is concerned about the potential to aggravate an already volatile person by taking their weapons:

“Going in and taking their guns and leaving the scene, I can’t see how that makes them less of a risk. It just takes one tool away,” said Reams, arguing that a person bent on hurting someone could do it with a knife or a car. (source)

He makes a great point. Last October, Maryland’s red flag law went into effect. Less than a month later, the law claimed its first victim. Gary J. Willis was killed by police when they showed up at his home at 5 am to serve him with a court order requiring that he surrender his guns.

Reams is not the only sheriff who is publicly voiced his intent to not enforce unconstitutional gun control laws.

Back in February, a group of sheriffs from New Mexico did the same:

Of the 33 sheriffs in the state, 29 have voiced disapproval of the package of anti-gun legislation by issuing a declaration through the state sheriffs’ association, stating that the “rush to react to the violence by proposing controls on guns is ill-conceived and is truly a distraction to the real problems proliferating violence in our counties and our state.” (source)

And, earlier this year, some sheriffs in Washington state publicly vowed not to enforce new unconstitutional gun laws.

In a statement, Colorado Attorney General Phil Weiser said he is “confident that when and if the time comes, all law enforcement officials will follow the rule of law.”

But Reams said he is serious: “I’ve explained that time and time again,” he said. “I’m not bluffing.”

What do you think about sheriffs refusing to enforce gun control laws?

Do you believe Reams – and other sheriffs – are truly willing to go to jail over this?