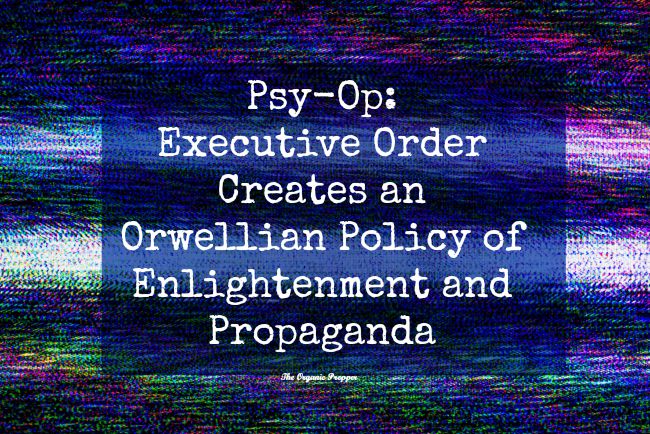 The ink is still wet on a brand new executive order that reads like a cross between the Reich’s Ministry of Enlightenment and Propaganda and George Orwell’s Ministry of Truth.

Of course, in true propagandist form, President Obama isn’t calling it anything related to Nazi Germany or a dystopian novel.   He’s calling it “Using Behavioral Science Insights to Better Serve the American People.”

Whatever you want to call it, prepare to be the subject of manipulation and behavioral experiments. This is a giant, official national psy-op and they’re announcing to us that they’re doing it.

Psychological Operations or PSYOP are planned operations to convey selected information and indicators to audiences to influence their emotions, motives, objective reasoning, and ultimately the behavior of organizations, groups, and individuals. (source)

(You can learn more about the use of Psy-Ops in this US Army procedural manual.)

The beginning of the Executive Order explains:

A growing body of evidence demonstrates that behavioral science insights — research findings from fields such as behavioral economics and psychology about how people make decisions and act on them — can be used to design government policies to better serve the American people.

Where Federal policies have been designed to reflect behavioral science insights, they have substantially improved outcomes for the individuals, families, communities, and businesses those policies serve. For example, automatic enrollment and automatic escalation in retirement savings plans have made it easier to save for the future, and have helped Americans accumulate billions of dollars in additional retirement savings. Similarly, streamlining the application process for Federal financial aid has made college more financially accessible for millions of students.

To more fully realize the benefits of behavioral insights and deliver better results at a lower cost for the American people, the Federal Government should design its policies and programs to reflect our best understanding of how people engage with, participate in, use, and respond to those policies and programs. By improving the effectiveness and efficiency of Government, behavioral science insights can support a range of national priorities, including helping workers to find better jobs; enabling Americans to lead longer, healthier lives; improving access to educational opportunities and support for success in school; and accelerating the transition to a low-carbon economy.

Oh my gosh. It’s going to change our lives. Everything will be wonderful now. We’ll all line up in an orderly fashion, follow the policies that were created for our own good, and be a happy, healthy, well-behaved population.

And if they do it right, most people will think it’s their own idea to do whatever the government wants them to.

Prepare to be “nudged”

It’s based on the principles explained in a book called Nudge: Improving Decisions About Health, Wealth, and Happiness.  (It’s interesting to note that Cass Sunstein, a former administrator of Obama’s  Office of Information and Regulatory Affairs, is the co-author of this book.)

What’s a nudge, exactly? A nudge means that the government will make something that they want to occur the default action. You might still be able to opt out by jumping through all sorts of hoops, but it will take more effort on your part.  They’ll make their options seem like the correct ones that everyone else is doing. They’ll use semantics. Instead of calling Obamacare a “tax,” they call it a “penalty” if you refuse to sign up.

For example, they might make people think it’s their own idea to be afraid of guns, to want to be vaccinated, and to restrict the use of utilities for the greater good.  If you think there’s a lack of critical thinking now, just wait.

This is mind control, made cute and fluffy.

Manipulation is now the official policy of the US Government

We’ve known for quite some time that the media manipulates us. Now, it’s officially the policy of the American government to psychologically manipulate us. If you were distrustful of what you saw on the news before, you can go ahead and ramp that up by about 539 kabillion times. The desired ideologies will be reinforced by media, entertainment, popular culture, and the government.

We’ll be the subjects of psychological experiments without consent

What’s more, they’ll be experimenting on us without our consent. Whether we sign up for it or not, we’ll all be a part of a giant mind control experiment.  Remember how mad everyone was when it was announced that Facebook had been secretly experimenting with manipulating users by showing people certain things in their timeline to affect their moods? Expect this from every possible direction now, because it’s official policy.

According to The Daily Caller, a “fact sheet sent out by the White House on Tuesday shows that researchers at numerous universities and think tanks — from MIT, Harvard, and the Brookings Institute, to name a few — have signed on to the program.”

The groundwork was laid in 2013

But this isn’t new. Back in 2013, Fox News reported that the White House had created a “nudge squad,” or more officially, a “Behavioral Insights Team” to influence the actions and opinions of the American people. From the 2013 White House document seeking behavioral scientists to implement the plan, this is based on a similar program in the UK:

A growing body of evidence suggests that insights from the social and behavioral sciences can beused to help design public policies that work better, cost less, and help people to achieve their goals. The practice of using behavioral insights to inform policy has seen success overseas. In 2010, UK Prime Minister David Cameron commissioned the Behavioural Insights Team (BIT), which through a process of rapid, iterative experimentation (“Test, Learn, Adapt”), has successfully identified and tested interventions that will further advance priorities of the British government, while saving the governmentat least £1 billion within the next five years (see previous Annual Reports 2010-11 and 2011-12).

The federal government is currently creating a new team that will help build federal capacity toexperiment with these approaches, and to scale behavioral interventions that have been rigorously evaluated, using, where possible, randomized controlled trials.

Pretty soon, I figure you can expect a calm soothing voice to begin speaking through your walls to tell you what your opinion is.

Make no mistakes: this is a psy-op and we are the targets.

Orwell’s nightmare is becoming our reality. We’re officially living in a dystopian novel where mind control and manipulation are the official policies.

Facebook ran covert mind games experiment on its own users

The Third Reich: Politics and Propaganda