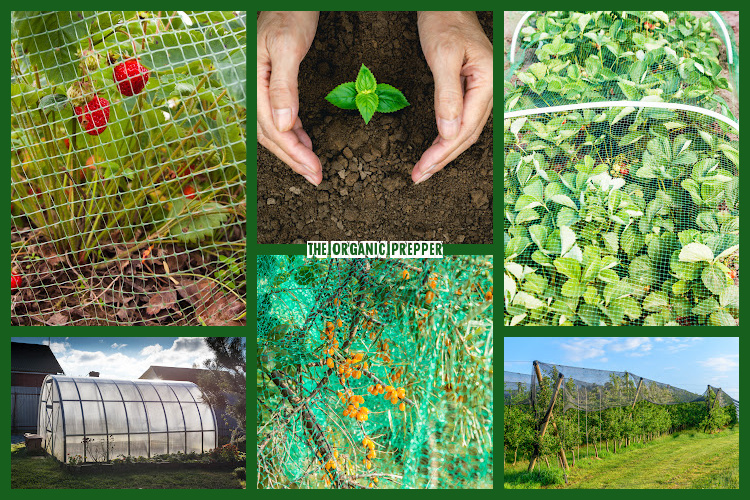 Even those considered organic and a very basic part of our arsenal, such as copper fungicide, might very well be more difficult to come by in the future.

So what do we do? How did our forebears deal with their pests? Are there old-fashioned pest management techniques that can easily be implemented by the prepper?

Sacrificial gardens date back more than 2500 years. The first farmers planted as much as they could and hoped the pests, (rabbits, insects, deer, etc.) would leave them some. Fences, floating row covers, and the coveted greenhouse came much, much later but are definitely useful additions to our pest control arsenal.

The earliest recorded use of pesticides comes from the Sumerians, 2500 years ago, as they used sulphur compounds as insecticides. The Chinese used herbs and oils at some point later. Phenology, the study of the timing of recurring biological events, was recognized around 300 BC, which resulted in the use of timing to avoid pest life cycles. This is done today with pests such as the squash vine borer.

Fast forward to the 1600s, when tobacco infusions, herbs, and arsenic first came into widespread use. Imperial expansion during the next few hundred years introduced new pests throughout the world, such as the Colorado potato beetle. Paris green, a mixture of arsenic and copper sulfate, then came into widespread usage. Eventually we get Bordeaux mixture, a combination of copper sulfate, lime, and water (with many applications), that’s still in use today.

Of course in the 1960-1970s, biologists, most notably Rachel Carson, realized the environmental damage caused by some of these compounds. Arsenic, for example, is a heavy metal. Copper is as well, and too much pesticide use absolutely trashes the soil fauna. Pesticides, especially neonicotinoids, also kill off beneficial pollinators.

And it’s not just the soil around you that can be damaged as well. Consider the potential consequences of eating these pesticides. It probably won’t make you feel much better to realize they’re in all kinds of food you normally eat as well.

So what can we do to protect our own food supply?

Obviously, how we manage pests depends upon both the pest and the crop it’s attacking. If it’s a deer or rabbit problem, a sacrificial garden plot and some fencing might do the trick. I use 3’ high chicken wire to keep rabbits out of my strawberries, plus bird netting on top to keep the feathered enemy out. It’s not the prettiest stuff to look at, but it ensures that the fruits of my labor end up on my plate, rather than in a rabbit’s belly!

Rats, moles, voles, and other rodents are a bit more of a challenge. I use snap traps baited with peanut butter. I do have to get rid of the bodies, but I find this preferable to poison. Poisons tend to hit more than the target species, and can affect pets and children as well. They’re dosed by weight, and when any predator such as a hawk or owl eats enough poisoned rodent, they’ll die too. Death from poison is a horrible way to go, so I use snap traps.

They’re cheap and easy to stock up on, and are effective for at least a half dozen or so kills. I find that the spring gets a bit loose after that and doesn’t always snap when the rodent steps on the plate. As if that isn’t enough, rodents are actually pretty smart about traps. I’ve seen them approach from the other side to eat the food without springing the trap. It’s frustrating but is still better than using poison. At least in my mind.

Are there old-fashioned pest management techniques for insects?

How do we minimize the damage caused by Japanese beetles and other annoyances while allowing bees in to pollinate? One method is simply to grit your teeth and tolerate the beetle, which lasts only a couple of months. Unfortunately, other insects, such as the tent caterpillar, will totally kill the tree they invade.

In the context of this article, plant selection is probably the best strategy. Use plants that are resistant to these pests, or let Japanese beetles have the roses so they’ll leave the more important crops alone. This strategy can actually work for more than the Japanese beetle.

Other insect controls that can be implemented using easily obtained materials include hoop houses and floating row covers. These can eliminate a wide variety of insects on a number of food crops, and have the added benefit of extending the growing season. There are many kinds of row covers, from light to heavyweight, some of which are reusable from season to season. A big drawback is having to remove them during bloom, which obviously limits their use as pest management during that time.

Hoop houses yield many of the same advantages as row covers, and they’re not that hard to build. Really, they’re just plastic versions of greenhouses. Of course, gardeners in harsh climates should give some thought to materials that will withstand conditions.

Companion planting is a huge subject.

Basically, some plants get along better than others, much like people. Some plants enhance each other, other combinations inhibit. A quick search will help you plan your garden accordingly. Another great resource is Carrots Love Tomatoes. This book is a wealth of information on both good and bad companions, as well as plants that help attract pollinators and control pests.

Don’t be totally satisfied with a quick search, however. I found out the hard way that tomatoes don’t love kohlrabi! It took some digging to confirm my suspicions, having noted that my tomatoes were half their usual size at that time of year and weren’t flowering at all, let alone setting fruit. I had to buy tomatoes for canning that year, which was completely embarrassing.

If I didn’t have farmer backup my pantry would have suffered greatly.

Planting to attract beneficial insects and control pests does require some planning, but what activity that’s worthwhile is also easy? Keep in mind that beneficial insects need to feed in both larval and adult stages and plant accordingly. For example, the dreaded Japanese beetle can be controlled by planting both garlic and rue near the plants we want to protect.

Composite flowers such as daisies, chamomile, and the mint family attract parasitic wasps, hoverflies, and robber flies. Give the wasps some space and respect and they’ll also pollinate a few things. Ladybugs will eat aphids and fungus gnats. Borage is also beloved of certain bee species. Many of the herbs we plant also deter unwelcome insects, such as thyme, rosemary, and sage.

Marigolds, nasturtiums, lavender, borage, and basil – what’s not to love?

What to do when all else fails?

Of course, there are some problems that are bad enough to require pesticides. When this is the case though, there are “friendlier” alternatives we can turn to. Soap, garlic, and chili pepper sprays have been noted as homemade remedies, and can easily be made from things you have around the house. Diatomaceous earth and neem oil also have pest-control benefits, and though they are a bit more difficult to come by at the moment than “normal”, they’re not impossible to get your hands on.

Hydrogen peroxide can be used in a number of ways, although there are precautions that need to be taken in the form of gloves and eye protection. This is a very handy item to stock up on! It can be used as a disinfectant, for both soil injection and foliar spraying, and in a seed starting solution. And check out this post for instructions on how to make a fungicide spray from aspirin and water.

Old-fashioned pest management remedies can save you a lot of headache – even in your garden.

In these uncertain times, it’s a good move to consider how we can solve our problems using locally-obtained items, especially items we already have or can easily acquire. Human beings have been managing pests for hundreds of years, often without using dangerous and destructive chemicals.

How do you manage yours? Are there old-fashioned pest management techniques you regularly put to use? Let us know in the comments below! 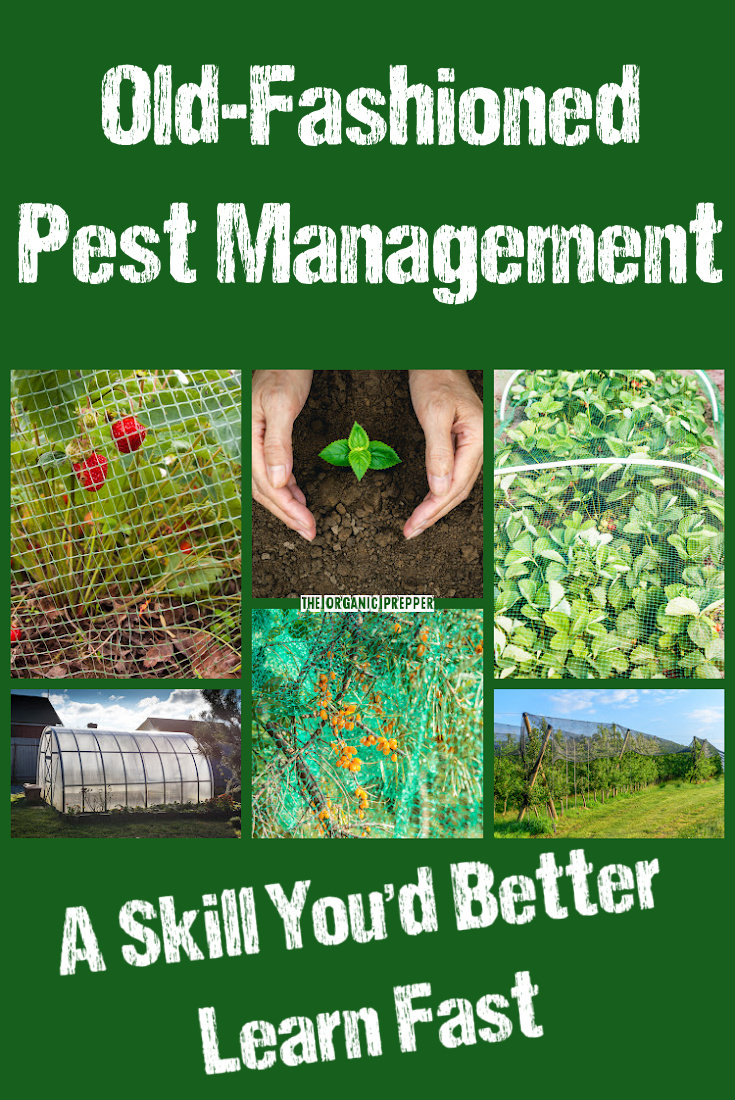