North Korea Escalates with a Missile Over Japan; Citizens Warned to Take Cover 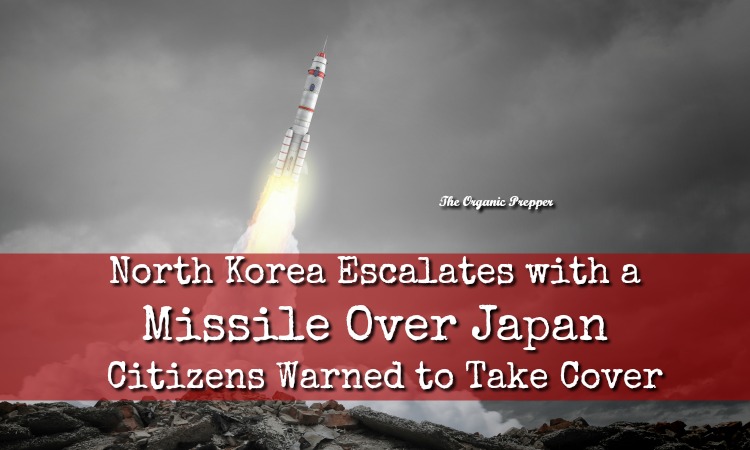 The Pentagon and the Japanese national news station (source) have both confirmed that North Korea fired a missile over Japan at 5:57 am local time. (That’s 4:57 pm Eastern Standard Time.) Officials say the missile was launched from Pyongyang.

When the missile was detected, the citizens of Japan were alerted to take cover.

The Japanese government has urged people in Tohoku to take refuge in solid buildings or underground shelters, according to NHK. (source)

Fortunately, the missile flew harmlessly over Japan and landed in the ocean, where it did not cause damage to any watercraft. But the threat cannot be ignored.

Here’s the flight path, as per CNN. 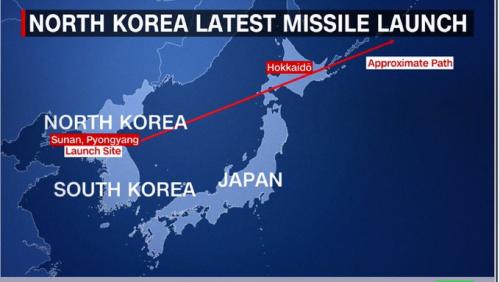 “The missile launched by North Korea flew over Japan,” Pentagon spokesman US Army Col. Rob Manning said. “We are still in the process of assessing this launch.”
South Korea’s Joint Chiefs issued a statement that North Korea “fired an unidentified projectile” from an area near Sunan, Pyongyang, toward the sea east of the Korean Peninsula, that “flew over Japan.”
Japan’s Chief Cabinet secretary Yoshihide Suga said the missile passed over the Erimo Cape of Hokkaido, and it is estimated have fallen in the Pacific Ocean, about 1,180km east of the Erimo Cape. (source)

The launch is considered to be a particularly aggressive test. South Korea’s military is on high alert and “has strengthened its monitoring and preparation in case of further actions from North Korea.” (source) US Pacific Command is also standing ready to respond. 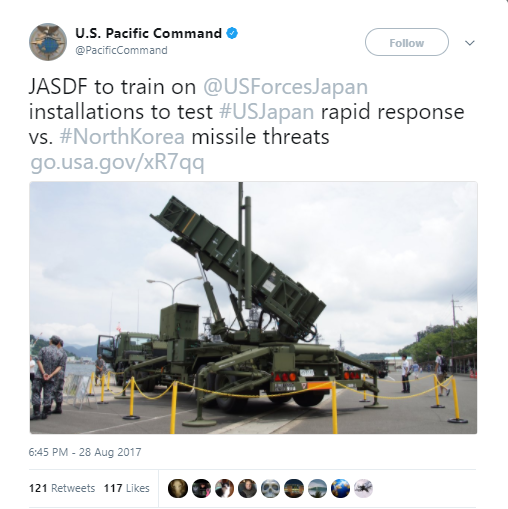 (source)
Three short range missiles were fired over the weekend, and this most recent launch is in defiance of escalated warnings from the international community and President Trump.
It seems extremely likely that Japan will retaliate.

Japan’s Chief Cabinet Secretary Yoshihide Suga said the missile test was a threat that Tokyo would respond to firmly.

“This ballistic missile launch appeared to fly over our territory. It is an unprecedented, serious and grave threat to our nation,” the top government spokesman told reporters.

Suga called the test a clear violation of United Nations resolutions. He also said that Japan will work closely with the U.S., South Korea and other concerned nations to find a timely and appropriate response.

As for those of us who could be caught in the crossfire of warring world leaders, the thing we must focus on is being prepared. Many will undoubtedly say that this is a set-up for a false flag, but when you’re talking about your family’s survival, it won’t really matter who’s firing nukes. (More on that topic here.)

Read this article to learn more about surviving a nuclear strike or take this class for more than 2 hours of interviews with nuclear survival experts.

Keep your eyes on the news. (You can sign up here for my newsletter.) As we learned a few weeks ago, we wouldn’t have a whole lot of notice in the event that missiles bearing nuclear warheads were fired at the United States, so you need to have all of your basics in place well ahead of time.

This could be the last straw for nations around the world who are tired of Kim Jong Un’s loose-cannon actions. Don’t expect this aggressive action to go unanswered.