No Lunch for You: Cafeteria Nazis Take Lunches from Kids, Throw Food in the Trash 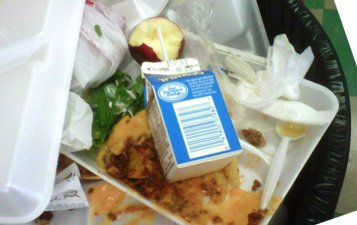 Because nothing says “nurturing children” like snatching their lunches out of their wee little hands and throwing the food in the garbage can.

Admittedly, recent efforts to start an after-school dinner program in New Jersey met with adamant disapproval, but it seems as though the pendulum in one Utah school just swung way too far in the opposite direction.

At the behest of the district child nutrition manager, staff at Uintah Elementary School in Salt Lake City, Utah, began notifying parents whose children had a zero or negative balance on their lunch accounts.  This, of course, is understandable and perfectly reasonable.

As a result, the child-nutrition manager visited the school and decided to withhold lunches to deal with the issue, he said. (source)

That’s all fine and dandy.  The issue, though, is that the kids, who were potentially unaware of the financial issue, stood in line, got their trays of food, and walked to the register, and that is when the situation devolved into a humiliating and wasteful experience.

But cafeteria workers weren’t able to see which children owed money until they had already received lunches, Olsen explained.

The workers then took those lunches from the students and threw them away, he said, because once food is served to one student it can’t be served to another. (source)

What possible purpose could be served by squandering that food?  This is not a particularly economical solution if the school’s concern was unpaid lunch bills. While I completely agree that the children’s accounts needed to be taken care of, the manner in which this was handled was callous, wasteful, and humiliating.

Olson was quick to justify the action.

“They did take that tray away and gave them fruit and a milk,” Olsen said. “We don’t ever let kids go without any food entirely.” (source)

Initially, the school district was unrepentant.

Olsen said he would not describe the tactic as a mistake.

“If students were humiliated and upset,” Olsen said, “that’s very unfortunate and not what we wanted to happen.” (source)

But such a barrage of complaints was received that now, the district has admitted wrong-doing. A statement released said:

[the] situation could have and should have been handled in a different manner. We apologize.

We understand the feelings of upset parents and students who say this was an embarrassing and humiliating situation. We again apologize and commit to working with parents in rectifying this situation and to ensuring students are never treated in this manner again. (source)

Fifth-grader Sophia Isom, Lukes’ daughter, was met by a district nutrition manager who was monitoring accounts.

“So she took my lunch away and said, ‘Go get a milk,’ ” Sophia said. “I came back and asked, ‘What’s going on?’ Then she handed me an orange. She said, ‘You don’t have any money in your account so you can’t get lunch.’ ”

She said the food was being thrown out. Sophia said the same thing happened to many students, and it was the talk of the lunch period. (source)

One could validly argue that it is the parent’s job to make sure their children’s accounts are up-to-date.  However, the issue should have been dealt with through the parents. Other area school districts handle it differently.

The Jordan School District does not have a set policy, but a spokesman said they will charge elementary school students up to five days, after which the principal will work with the student and family. Their clerks are told specifically not to deny lunch to any students in elementary school. As the students enter middle school and high school, the system becomes stricter and the students are held more accountable. Parents can also make immediate payments on mobile devices.

In the Granite District, when an account hits zero, the student still gets lunch, and the parents get a phone call and a letter. The Canyons District has a similar notification system. (source)

If your child attends public school, it’s getting harder and harder to be sure he or she will be fed every day.  First, Michelle Obama made her crazy caloric restriction rules, and everyone said, “Send a brown bag lunch!”   Then some preschools began disallowing homemade lunches without a doctor’s note. One school even had the audacity to charge parents for “supplementing” with junk food.

One thing in the Utah incident is pretty clear to me: any “child nutrition manager” worthy of the title should be ashamed of making an arbitrary decision to suddenly rip the food from the hands of students and throw it in the trash. You don’t just say, “Surprise!” and then starve and humiliate children  in order to collect payment from the parents.