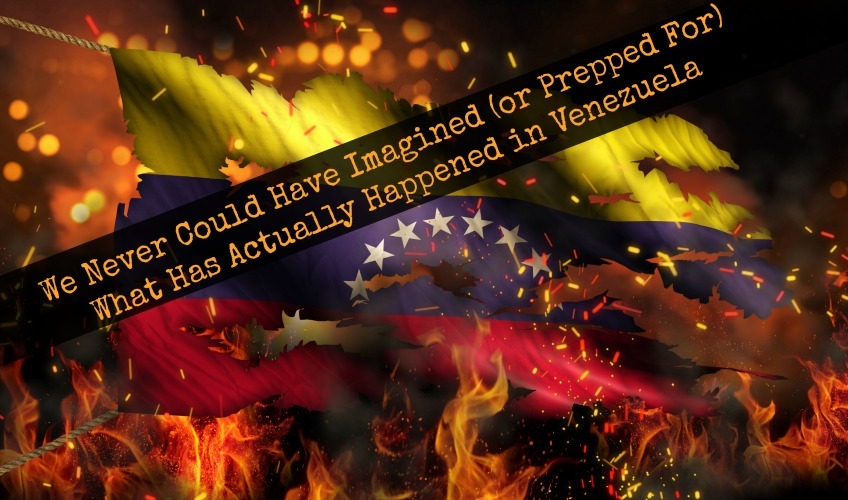 Can we prepare for everything?

We never could have imagined…or prepped for…what happened in Venezuela.

In this article, I wanted to analyze my preps, and the nature of the apocalypse we have been forced to face. I don’t know about you, but anything that kicks you out of your place, of your warm bed, your pets, kids, wife, and the rest of your family, for me does not have another better word to describe it.

My comfort bubble was destroyed, my work of an entire life was thrown out by the window, my family insurance full coverage policy is gone with the wind (although with no medications to be had and doctors running away to Argentina and Colombia, it’s not like it was very useful though), and the few preps I had for 4 or 5 months are history now. Of course, they worked pretty well, and we stretched it a little bit, but once the system collapsed, there is nothing else we can do but close the place and bug out to some other place where we can at least buy food.

What happened was something entirely different from what we had prepared for.

I guess that what I mean is, that, within our means, we prepared more or less adequately, but what really happened was something entirely different that we had not prepared for.

We prepared for some of the consequences of turmoil, unrest, riots, crime. We were able to hunker down for a while and able to defend ourselves silently and seriously, without having to leave our haven. The scarcity problems started back there around 2013-2014. Those years were the last time I remember we could buy large amounts of wheat flour, corn flour for arepas (yes, those yellow packages you see people fist fighting each other for on the web), pasta, powdered and UHT packaged milk, rice, and other staples.

An economic collapse this long seemed like something that was entirely out of the question. It was entirely unpredictable. I would have expected a pandemics or a coup d’etat long before this hungry zombie-like scenario.

We knew something disturbing was going to happen sooner or later. We could feel it in the atmosphere…but nothing like this. We never thought it would be impossible to find a battery, or engine oil, or gasoline (Jeez, this was an oil-producing country!!) or that kids were going to be endangered in the very door of their schools. In the worst of our nightmares we could have imagined that one of our rescued cats that we relocated with one of our friends in a barrio was going to suffer a horrendous death (please don’t ask for details).

We never could have imagined that the oil and electricity state companies employees were going to be threatened with imprisonment for treason if they tried to quit their jobs to leave the country. Because THAT IS HAPPENING. When I found about this, I felt a deep sensation of relief as never in my life because I had left. The only similar feeling I can think about, was when my last son was born, and the doctors told me he was just fine, like a champion, and no reasons to worry about.

Under the current situation, being accused of such terrible charges is a complete nightmare. But with the income from the online freelance work, we have been able to at least keep the home running, without the tiny salary that once was more than enough for a good living. Without it…our family would have been condemned to doom, no matter our preps.

So quitting and leaving the country (and my family) behind was one of the choices that have been the hardest in our lives, but the most sound, and the most assertive in the long run. Just by avoiding the potential danger of being (falsely of course) accused of treason and getting in a messy problem, it’s already a huge benefit. I have always given trust to female intuition. When my wife and I discussed about how bad things were going, and the decision for me to leave first, I knew it was her intuition speaking.

We never imagine that cash was going to be another commodity, and that the prices were going to be much different if you tried to pay with debit card instead of cash. If you pay with a debit card, the price will be double than if paid in cash. This is not surprising: the rate of the circulating cash to the non-circulating is deeply distorted. There are people even SELLING the cash: you transfer them one million BsF to their bank accounts, they will give you 500 or 600.000 cash. And that is barely enough for two dozen eggs and some cheese.

In retrospect, what could we have done to prepare for the current situation?

Yes, I know how it sounds. But I don’t care after some things I have known these MFs can do, like a guy being shot 30 meters from the person who told me the story by a criminal in a motorcycle, and me and my family almost being stopped in a desert road at 8pm in the middle of nowhere with a log in the middle of the way (I just push it to the floorboard, and we jumped over it).

There is no possible way to have stockpiled pasta and other dry goods for such a long period without buying another house, or building a second floor adding about 60 or 70 square meters to the house. And even so it would have been risky: someone watching in the wrong moment and we would have been in deep trouble, accused of “hoarding” and yadda yadda (insert your favorite “socialist” excuse for stealing private property here). Our goods seized, the 10% sold in public to “the poor people” for the government-owned newspapers and the 90% stolen by you-know-who.

Self-supplying proteins with our current setup in a subdivision is much harder. There is not too much space. Rabbits and other rodents are out of the question as the flies their poop attract here in the tropics are a problem, and economically not viable by the way. The cleaning products and food are too expensive and, as you must suppose, scarce. The people in country cottages already will be much better prepared than we nerdy, espresso-addicted, city dwellers.

In this light, it seems that the best choices would have been moving out to a cottage, don’t you think?

It’s not that easy.

Our laws don’t approve home schooling; driving one hour from the country cottage to the school everyday is out of the question because getting car parts and consumables is nearly impossible, or too expensive.

Crime is getting increasingly nasty. A cottage with crops and cattle is an easy target for hungry people that was too lazy and ignorant to prepare themselves when they could. Getting a tool like a shotgun for defense just would bring more problems. Thugs see this as an attraction too big to resist. Since weapons and ammo are scarce, they are a real treasure. They know where you are, and they are organized and have the proper contacts to be able to put you in a  very difficult position.

It would have been much worse to take down something trying to mess with you in your own home, as they never steal alone. The castle laws won’t apply, unless the deceased has been a real pain in the backside and a dangerous criminal in his life, and if that’s the case, chances are that a lot of his friends are similar. A second “visit”, perhaps with more prepared thugs will come, because they know you will be able to do whatever you need and won’t take horse manure from anyone.

Or even worse, LEOs will prosecute the cottage owner because they are a ‘threat to the government.’ They will empty the house of whatever is inside as possible “products of a crime” and the owner will be unable to prove the contrary from inside the jail. I have known from several people who had to pay monthly to the guerrilla militia the products that they preferred to sell at a loss.

Having kids to take care of and provide for, the lone wolf option is not really an option. If the BOL is not far away enough or well hidden enough, sooner or later someone will discover it. The best option is to band together with some other families, each in their cottage, and build a communications network reliable enough and with good backup, in case some packs try to attack. I know this would be much easier for USA people, as their access to all kind of defense tools is much better.

I want to thank to those who have sent assistance, from the bottom of my heart. However, building the needed amount has been slow: I have still to buy some mattresses, a small table with chairs, and some other stuff, despite sending some money home weekly for food as well, before getting the tickets to get my people out. I had to leave all of my gear back at home, and starting from zero.

I appreciate your comments, even if I have not responded to most of them yet, but I promise you I will submit a special article with the answers to all your questions, as they are very interesting and I know you will be interested in a lot of what I have to say about those topics!

Thanks, my dear readers, and see you next week!