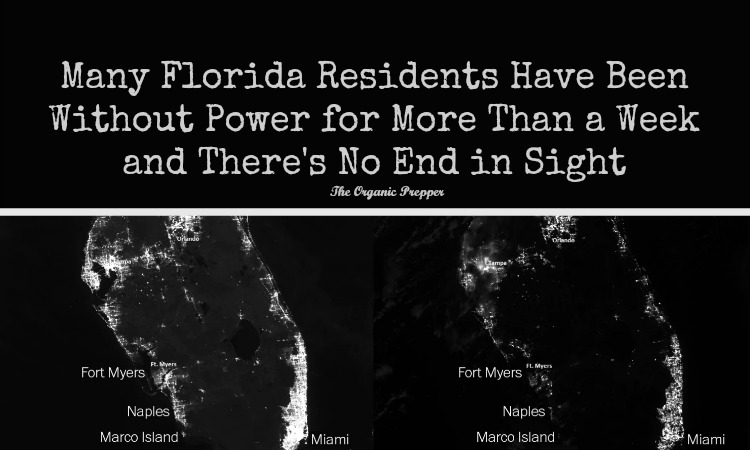 Hundreds of thousands of homes in Florida are still without power more than a week after Hurricane Irma barrelled through on her destructive path. And, unfortunately, there’s no clear end in sight for them, as infrastructure was so thoroughly destroyed in certain areas. With an average temperature in the 90s, days in Florida are miserable indeed for those without power.

Restoration of power is a slow process in some areas.

According to an article in the Washinton Post, it could be a while before everyone has their power restored.

Duke Energy Florida said it would restore power to most customers by Sunday, a week after Irma made its first landfall in Florida. Some harder-hit areas could take longer due to the rebuilding effort.

Gould said that FPL [Florida Power & Light], which powers about half of the state, expected customers on Florida’s East Coast to have power back by the end of the weekend. People in western Florida, closer to Irma’s path, should have it back by Sept. 22. That estimate does not include places with severe flooding or tornado damage, he said, and those areas could also face a longer wait to be able to switch on the lights…

…In Key West, it remained unclear when power, cellphone service or supplies would be available again. (source)

The power outages are in great number due to structural damage, which is why it’s taking such a long time to get it turned back on. Utility workers can only replace poles and lines so quickly. The extent of the damage also speaks to the massive size of the storm.

Across the state, the explanations for the outages were visible alongside the road.

“It’s a lot of trees and power lines and snapped poles,” said Kate Albers, a spokeswoman for Collier County, which stretches across southwestern Florida and includes Marco Island, where Irma made her second landfall.

“I can tell you from driving around you see lines down all over the place,” Albers said. “You see trees thrown through power lines and you’ll see an occasional pole.”

The high number of outages across Florida were due largely to the storm’s massive size, said Ted Kury, director of energy studies for the Public Utility Research Center at the University of Florida. (source)

Florida Power & Light has more than 20,000 employees working around the clock to restore power in the following order:

How many people lost power during the hurricane?

Some estimate that more than 16 million people lost power during Hurricane Irma (source) out of a population of 20.6 million residents. This is one of the biggest hurricane-related power outages in history. To put it in perspective:

It’s obviously going to take some time to repair that much damage.

Some people have asked why the power lines in hurricane-prone areas are not buried. While it’s true that buried lines are less likely to be susceptible to wind damage, they’re susceptible to flood damage, which is part and parcel of a hurricane.  Buried lines are very expensive to install and they are expensive and time-consuming to work on since they must be dug up to be repaired.

What are the challenges people are facing during this lengthy power outage?

The primary complaint is the heat. The daytime temperatures are in the 90s, and it’s very humid in Florida, which leaves residents who are accustomed to constant air conditioning absolutely sweltering. Some are spending their days at nearby malls or other businesses that have power in order to beat the heat. Tragically, the extreme unrelieved heat has been the cause of death for some elderly nursing home residents. (source)

Even families equipped with generators are suffering:

For families like the Morrisons, whose Longwood home on South Hamlin Street has been without power for seven days, it’s small consolation. According to father Cecil Morrison, they’re throwing away what was once good food, cooking outside daily, and sleeping together in their living room to stay cool.

“When we turn off the generator, the ice starts melting from the refrigerator and we had to take half of the meat over to our mom’s,” Morrison said.

He went on to say it’s cost him about $30 a day in gasoline to run his generator every day over the past week.

“Right now, I’m on the last three gallons of gas, unless I go into the Christmas funds and take the last of that,” Morrison said.

For Morrison’s family, it’s not just the loss of food, either. They haven’t been able to store medication for one of their children properly, as it has to be stored in a cool place.

“It’s about $1,200 bucks for these,” Morrison said, showing us the medication. “But even with Medicaid I don’t know … with the medicine going bad, I don’t know how long it will take to get him back his medicine.” (source)

Food is a real issue for many people. Everything that was in their fridges and freezers has long-since spoiled and anything that came into contact with flood waters must be discarded.

When the power goes out for an extended period of time and refrigerators and ovens are inoperable, the risk of food poisoning is heightened. People should throw away any perishable food that has been at room temperature for two hours or more or any food that has an unusual odor, color, or texture.

Additionally, people should discard any food that has come in contact with floodwater, even those that are wrapped or packaged in plastic.

“There could be microbreaks in the plastic,” Dr. Robert Glatter, an emergency physician at Lenox Hill Hospital in New York City, told CBS News. “There’s no way to know if it’s been compromised.” (source)

Some people believe that FEMA and the Red Cross will pay to replace spoiled food. This is not the case. While they are dispensing other types of aid, grocery store vouchers and value replacement are not included. (source) For those who have run out of food and can’t afford to buy more, food banks are their best bets.

Businesses are reopening, but struggling.

Some business are reopening, while others may cease to operate due to extensive damage.

Some stores, including some small ones, had also reopened to sell critical supplies for cash, because their credit card machines were not yet operating…

One of the bigger obstacles for employers is maintaining payrolls: how to keep workers earning their pay — and actually getting payments to them because power is out. Business shutdowns also have a big impact on hourly employees, who may have to go without pay…

Meanwhile, in Houston, Paula Harvey is still dealing with the effects of the hurricane that shared her surname. She said some orders for her business, Schulte Building Systems, are delayed, though none so far have canceled. A bigger long-term concern is whether the handful of employees who lost their homes and cars will remain.

“What happens during these types of things is, some people just say, ‘forget it’ and leave because they’ve lost everything, and then they go somewhere else and start over again,” Harvey said. So far, that’s happened with one employee, who simply did not report back to work. (source)

The lessons we can learn from this extended power outage.

Those who study preparedness can learn a lot from the aftermath of a disaster like this. We can take these lessons and become better prepared when disaster comes knocking at our own doors.

Your situation will be much worse if you plan to rely on the aid of FEMA and the Red Cross. It’s essential to take matters into your own hands and prepare for the most likely concerns well before an emergency ever happens. If you wait until the disaster is nigh, supplies will be limited and you’ll be fighting with your neighbors to get what you need. As well, if you wait too late to order online, you run the risk of receiving your supplies once the emergency is over.

Coming soon: the situation in the Florida Keys is even more dire than that of the rest of the state.