Kansas City Promises to Stop Pouring Bleach on Food for the Homeless After Outcry. But Will They Find Other Ways to Destroy It? 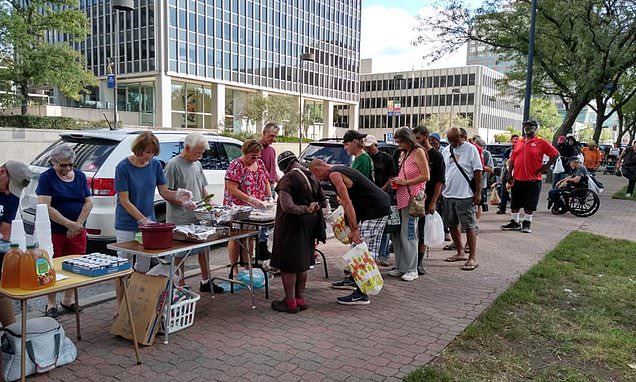 Kansas City, Missouri Health Department made a national splash when their staff literally poured bleach on food intended for homeless people earlier this month. A coalition of friends called Free Hot Soup (FHS) Kansas City had formed picnic-style food gatherings to provide hot meals for homeless people, and all went according to plan until officials trashed the food and doused it in bleach to render it inedible.

“It looked ugly Sunday,” the Star reported last week. “Home-cooked chili, stacks of foil-wrapped sandwiches, vats of soup and other food prepared by volunteers with Free Hot Soup Kansas City were dumped in bags and soaked in bleach to make sure no one went back to try to recover it.”

–“Everybody was ready to stand up for themselves,” Nellie McCool, a volunteer with Free Hot Soup Kansas City, told the Star. “We’re prepared to face the law.”

Free Hot Soup has even stripped the gathering point addresses from its group listings perhaps to keep local government from ambushing them again.

Surprisingly, all ends of the political spectrum were unified in an outcry against this affront on rights and helping others.

To my friends in Kansas City, open your windows up wide and yell “I am mad as hell and I’m not going to take this anymore!” https://t.co/QzEKMA7pMX

Does it really make safety sense to bleach food that might accidentally go back into someone’s mouth? Bleach, by the way, should never go into the ground for the same reasons it shouldn’t be ingested.

The Destruction of Food Should Be Left Behind in History…

I just want to point out that all throughout history, it was a recurring theme for commanders to destroy the food or crops of a people they wanted to subdue and control. Sowing tares in wheat fields. Burning crops with salt.

Regardless of what one thinks of the homeless problem in America or what we should do about it, here are three cold hard facts:

The Kansas City, Missouri Health Department has said that it will no longer use bleach in situations similar to the one that happened recently with a group called Free Hot Soup.

The KCHD released a PDF in response to the resident backlash of footage showing bleach poured on food for homeless people.

In response to the question, “Why did the Health Department pour bleach on food for the homeless?” KCHD wrote:

While the use of bleach may be alarming, it is a common practice used by public health departments throughout the country when responding to direct threats to public health from potentially contaminated food. The inspector at one location was told food would be re-served after being placed in trash bags, therefore the inspector had to use bleach to ensure the food in question would not be served

In response to residents’ concerns, The Health Department has reviewed its food disposal practices during inspections. In the future, inspectors will no longer use bleach in these types of situations.

“I am glad the use of bleach has been discontinued. Hopefully, there will be no more need for our union’s members to be called to watch the destruction of food meant for those that have nothing,” Tweeted Brad Lemon, president of the Kansas City, Missouri Fraternal Order of Police.

The PDF goes on to paint the health department as the defenders of the homeless while nearly suggesting that there was some harm intended toward homeless people by the people who were feeding them. One line, in particular, stands out. It’s in reference to homeless people eating discarded food anyway:

But I guess bleach poisoning is okay? Starvation is preferable?

The health department was demanding permits for the passing out of food.

FHS Kansas City responded to the health department by pointing out that first, they are not a charitable organization and that the health department didn’t even get the group right. FHS says they are a picnic gathering of friends from Facebook. They make the point that the government doesn’t go around bleaching meals at family reunions, company picnics, and the like.  So why should it destroy food at this gathering?

“‘Free Hot Soup’ is not a charitable group. It is a reference to a handful of closed Facebook communities. Your permits and oversight are not applicable. Everyone in attendance at our picnics are individuals engaging with our personal friends, and you infringed on our freedom of association and freedom of expression by requiring a permit for our activities with them.”

Read the rest of the FHS response HERE.

Here’s the problem with their statement…

Just because the health department will no longer use bleach does not mean it will stop destroying perfectly good food intended for hungry people. It will just find a different way to keep individuals from helping others.

And by now you’ve seen countless stories of local code enforcers preventing people and church groups from feeding the homeless.

In 2016, raw footage of the government throwing away new, fresh produce in New York just because it wasn’t displayed “properly” produced a fever pitch among residents who saw it for what it was: senseless, bureaucratic destruction of food. It kind of makes all those “food waste” reduction campaigns rendered meaningless.

These stories and stories of peaceful farmers having their raw milk destroyed or dumped are examples of destroying valuable resources that would allow for independence from government. In Australia, raw milk sold for soap making is spiked with a bitter, gag-inducing agent just to make sure that no one can use it for nourishment.

Readers who are interested in the topic of food freedom may enjoy a book by David Gumpert called: Life, Liberty, and the Pursuit of Food Rights: The Escalating Battle Over Who Decides What We Eat.

This is a denial of human rights.

Article 54 of Protocol I of the 1977 Geneva Conventions says:

It is prohibited to attack, destroy, remove, or render useless objects indispensable to the survival of the civilian population, such as foodstuffs, agricultural areas for the production of foodstuffs, crops, livestock, drinking water installations and supplies, and irrigation works, for the specific purpose of denying them for their sustenance value to the civilian population or to the adverse Party, whatever the motive, whether in order to starve out civilians, to cause them to move away, or for any other motive.

This GC code is actually in reference to a military practice called “scorched earth.” It’s not a punitive destruction of food, but a tactical move by an occupying force to make sure the enemy cannot use resources when moving forward or retreating.

For such an appropriate description coming from a code intended to stop inhumane war practices, one must ask themselves…

Who is the enemy here?

And why are the citizen-provided resources being systematically destroyed?