Is Opting Out of Processed Food the New Eating Disorder? 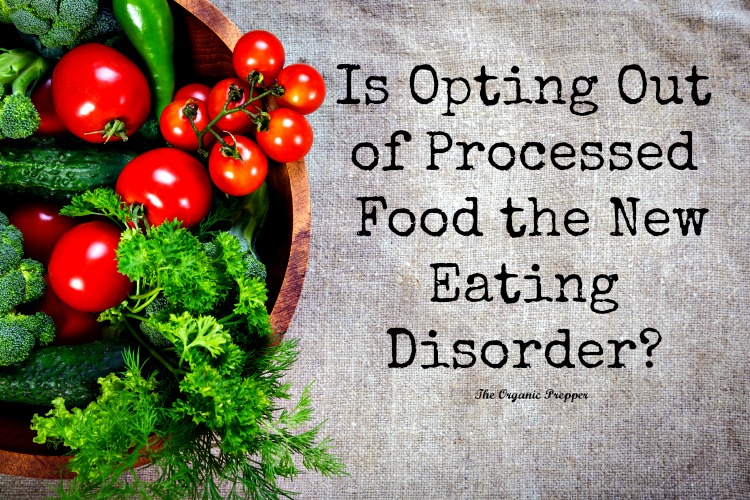 It’s time for an intervention. We need to talk.

Are you concerned about the stuff they call “food” at the grocery store?  Do you opt for whole foods most of the time, and feel unwell if you eat so-called “junk food”?  Are your views about food causing you to make changes in your day-to-day life? Do you believe there is a connection between the food you eat and your physical and mental well-being?

Then, it’s time to face reality.  If you choose to eat food without chemicals on a regular basis, you, my friend, are mentally ill.

A study found on PubMed explains. (Wow, it’s like they know me.)

Orthorexia is an obsessive-compulsive process characterized by extreme care for and selection of what is considered to be pure ‘healthy’ food. This ritual leads to a very restrictive diet and social isolation as a compensation. Orthorexics obsessively avoid foods which may contain artificial colours, flavours, preservant agents, pesticide residues or genetically modified ingredients, unhealthy fats, foods containing too much salt or too much sugar and other components. The way of preparation, kitchenware and other tools used are also part of the obsessive ritual.

Huh.  They say that like it’s a bad thing.

Treatment of orthorexia require a multidisciplinary team involving physicians, psychoterapists and dietitians. In some cases, antiserotoninergic drugs may be required as part of the treatment.

So the long and the short of it?

If you want to be healthy, you’re sick. You need a team of doctors and dietitians to cure you from trying to be healthy. And maybe some medicine. The desire for good health is an illness, and Big Pharma and Big Medical wants you to be better. And by better, they mean you should have no hesitation whatsoever about consuming the garbage passed off as food in the grocery stores.

Wow, I’ll bet that raising as much of my own food as possible really means I’m in need of intervention.

Just to clear up any confusion, it’s not about weight loss.  Doctor Thomas Dunn is an associate professor of psychology at the University of Northern Colorado who co-authored a paper in Psychosomatics, outlining the diagnostic criteria for the disorder. “It’s different than going overboard because you want to be skinny. Rather, it’s linked to people who are trying to be as healthy as they can be.” (source: New American)

Corporations are losing money when you make healthy choices.

Gosh, do you think this could have anything to do with plummeting sales for processed food companies? There are a lot of corporations with skin in the game. An article on Natural Society by Christina Sarich noted that sales are down for the following food manufacturers (Wait – is my orthorexia nervosa showing when I say that the word “food” should never be followed by the word “manufacturer”?)

Of course, companies like this have a very vested interest in making you think you’re crazy for not eating their offerings. And they have big advertising dollars. Perhaps that’s why the mainstream media is FULL of articles letting you know you have an eating disorder – because their advertisers need you to think you’re nuts.  And it’s a two for one deal for the media outlets – they can push treatment options that are available from their other advertisers.

For example, our good friends at CNN (who, incidentally had an ad in the sidebar for a Big Pharma medication on this article) explain:

There’s now a name for people dangerously addicted to all things healthy — a sufferer of orthorexia nervosa. Characterized by disordered eating fueled by a desire for “clean” or “healthy” foods, those diagnosed with the condition are overly pre-occupied with the nutritional makeup of what they eat. They rigidly avoid any food they deem to be “unhealthy,” or spend excessive amounts of time and money in search of the “most pure” foods…The condition is under-studied, and no one knows how widespread it is.

Articles from The Wall Street Journal and ABC News make it seem as though by refusing to consume processed foods or GMO foods, you are at risk of becoming malnourished. In the extreme examples they give, it’s obvious there is a far deeper issue than a desire to avoid junk food and eat clean

. Most of us that opt for healthful, healing diets don’t obsess over things like broken egg yolks, yet we’re all grouped together by the media.

What’s more, the people who should be able to help identify eating disorders are being professionally indoctrinated. Last year, the Academy of Nutrition and Dietetics received a “fact” *cough* sheet outlining the alleged benefits of processed foods from the International Food Information Council. It’s important to note that the IFIC receives funding from Cargill, Coca-Cola, Dr. Pepper Snapple Group, Yum! Brands (the parent company of Taco Bell, Pizza Hut, KFC, and WingStreet), General Mills, Mars, McDonald’s, Monsanto, PepsiCo,  and Red Bull.  You know, all of the companies that produce the recommended processed foods that will benefit your diet.  Here’s a look at that handout, if you’re interested.

If you wonder why many people are so confused about what constitutes good nutrition you need look no further than the propaganda being spouted by these so-called “experts”.  There is a real problem when the people sponsoring the nutrition lessons are the very purveyors of GMO crops, potato chips, soda pop, and fast food.

Many people are out there trying valiantly to make the best possible choices for their families on limited budgets, but they must combat the constant disinformation and now, scrutiny with regard to their mental health.  These folks are being deliberately deceived by food manufacturers, but even worse, by professional societies like the American Medical Association, the American Heart Association, the American Psychiatric Association, and the Academy of Nutrition and Dietetics.

Maybe if there wasn’t so much toxic garbage out there being offered as “food”, people wouldn’t have to be so diligent about what they consume. Maybe the people with the real mental disorders are the ones pushing the chemical laden, non-food crap in a bright, cheerful box, a box that contains things which are known to cause cancer, reproductive difficulties, hormone disruption, gut disorders, and inflammation.

Maybe they should come up with a name to identify those who display enduring antisocial behavior, diminished empathy and remorse, and disinhibited or bold behavior.

Oh yeah. Wait. They did that already. There is a diagnosis for those people.

And they’re the ones calling healthy eaters crazy.

Let me enable you with these resources:

What to Eat When You’re Broke

Nourishing Traditions: The Cookbook that Challenges Politically Correct Nutrition and the Diet Dictocrats

Nutrition 101: How Processed Foods Make Us Fat, Malnourished, and Sick