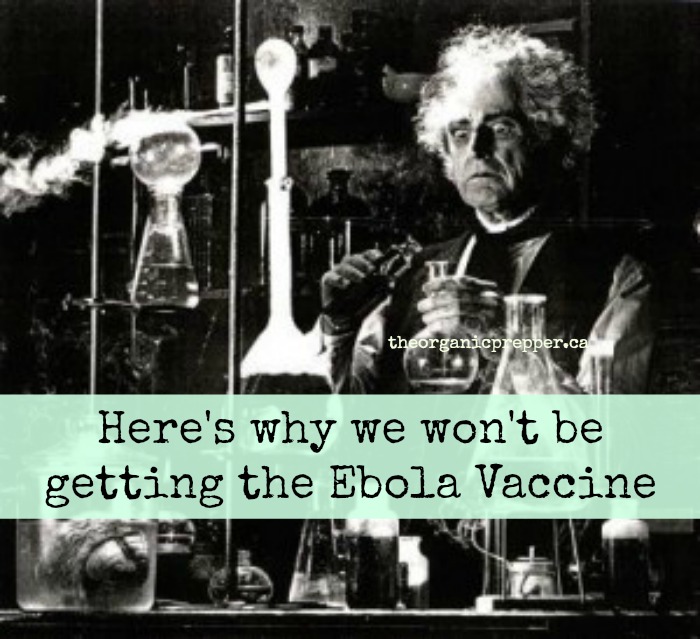 Yesterday, I wrote about my plans to safely isolate my family should the Ebola virus become pandemic in the United States.  What I didn’t touch on very much was the Ebola vaccine that is in the works.

The Ebola Vaccine could become mandatory.

Some people suspect that if a national health crisis were to occur, that a vaccine could be made mandatory. (I hope that President Obama doesn’t read my website, because I’d hate to give him any ideas – he gets so excited about circumventing Congress and making his own laws.)  He’s already signed an executive order that says people suspected of being ill can be detained and isolated. Michael Snyder of The Economic Collapse Blog wrote:

“Isolation” would not be a voluntary thing.  The federal government would start hunting down anyone that they “reasonably believed to be infected with a communicable disease” and taking them to the facilities where other patients were being held.  It wouldn’t matter if you were entirely convinced that you were 100% healthy.  If the government wanted to take you in, you would have no rights in that situation.  In fact, federal law would allow the government to detain you “for such time and in such manner as may be reasonably necessary”.

And once you got locked up with all of the other Ebola patients, there would be a pretty good chance that you would end up getting the disease and dying anyway.  The current Ebola outbreak has a 55 percent percent mortality rate, and experts tell us that the mortality rate for Ebola can be as high as 90 percent. (source)

Ebola quarantine stations are already in place to detain those who show signs of illness.

It turns out that not only is the government prepared to identify, isolate and detain potentially contagious individuals, but they already have the facilities in place.

…Such “quarantinable” diseases may include Cholera, Smallpox, Plague, SARS, Hemorrhagic fevers (like Ebola), and now even “respiratory illnesses” that may have symptoms similar to those of deadly viruses. (source)

You can check out THIS MAP to find the quarantine station conveniently located nearest you.

There is no way to know the longterm effects of the vaccine.

The pharmaceutical companies are already mentally counting the money as they scurry to finish an experimental vaccine.  Meanwhile, the public is being whipped into a panic, becoming more and more convinced they’ll die a horrible bloody death if that vaccine does not arrive at their local physician’s office soon.

That vaccine, however, will be completely untested. There is no way to know the long-term effects of something without…you know….a long term.  Something rushed to market like this could cause all sorts of issues. (Remember all of those kids who now suffer from a severe form of narcolepsy due to the swine flu vaccine that was hurriedly created a few years ago?)

Terrified people will be in a frenzy to receive this untested vaccine, convinced by a media blitz that it’s the only way to survive.  But, as Michael Snyder wrote, much like the flu vaccine pushers, they will insist that everyone else be injected, forcibly if necessary.

They say that if this vaccine is approved, it could potentially be available to the public at some point in 2015.

If a full-blown Ebola epidemic is raging by that time, the demand will be overwhelming.  But many people will not be satisfied to just get the vaccine themselves.  They will want everyone living around them in their communities to get vaccinated as well for the sake of “herd immunity”.  They will argue that those that refuse to get the Ebola vaccine are endangering public health.

So could politicians make the Ebola vaccine mandatory for all Americans at some point?  According to a paper by Jared P. Cole and Kathleen S. Swendiman, many states already have laws that allow for mandatory vaccinations “during a public health emergency”… (source)

And what if the vaccine has deliberate side effects?

Furthermore, if there was some kind of crazy mad scientist at the helm of this project, that person could have all sorts of fun inclusions in a mandatory vaccine that was forced upon every man, woman, and child in America.  Maybe the population growth could be slowed if recipients became less fertile.  Perhaps people could be more easily tracked if there was a teeny tiny little nanogadget in there.

I’m not saying any of this is actually happening, but it’s a fact that the science exists to do so.  Anyone receiving a rushed mass vaccine like this is putting an enormous amount of trust in Big Pharma and the government, both of whom don’t have a history of trustworthy behavior.

Finally, meet the creator of the Ebola vax.

If all of this is not enough to make you want to say, “No thanks” to a jab that could have heaven-knows-what side effects, let me introduce you to the fellow behind the development of this vaccine. Dr. Charles Arntzen runs The Biodesign Institute for Infectious Diseases and Vaccinology and you can learn more about him HERE.

He has a rather quirky sense of humor, as you will see in the video below.

So….will you be gathering the whole family to go roll up your sleeves to receive an injection developed by a guy with a clear depopulation agenda? Would you trust him with the health of your precious children?

Call me crazy. but…

Call me crazy, because I’m sure that some folks will.  Allow me to pre-empt that by saying: This article should give loads of new fodder to the dogmatically pro-vax folks that enjoy taking a superior tone to poke fun at the paranoid, anti-government, granola mama.  This seems to be a trend every time I write something that is against the Vaccine Gospel. Most likely, the previous sentences will be quoted, followed by a scathing comment. It’s okay, that won’t hurt my feelings.

The public is being deliberately terrified in order to assure compliance.

Anything mandatory should always be viewed with suspicion.

The vaccine is being rushed through the approval process.

There is no way to know the longterm effects.

We will not be getting an Ebola vaccination.

What about you?  I’d love to hear your opinions on an Ebola vaccine, whether optional or mandatory.

Prepping for an Ebola Lockdown

Vaccination Voodoo: What YOU Don’t Know About Vaccines

Vaccine Epidemic: How Corporate Greed, Biased Science, and Coercive Government Threaten Our Human Rights, Our Health, and Our Children

Disclosure as per the FCC: Some links in this article may be affiliate links.