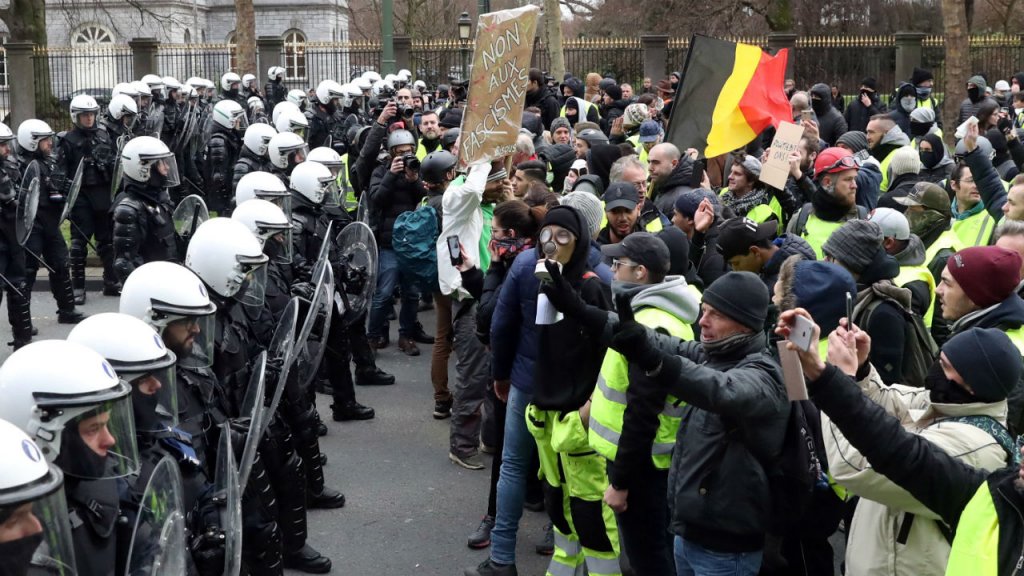 Editor’s Note: When I watch the Yellow Vest protests in France, and now in other parts of Europe, I can’t help but wonder if this is where we, too, are headed here in the United States. Between widespread political divisiveness and an economy that is truly suffering – despite what you see on the news – people here are also fed up. Is it only a matter of time before people in the US take to the streets by the hundreds of thousands and say, “Enough?” It’s truly essential to watch what’s going on in Europe to get a glimpse at our potential future – and to prepare for it. ~ Daisy

As protests continue to rage in France, discontent is festering elsewhere in Europe at the same time. What began as a routine protest deep in Paris has swelled to over a hundred thousand people and approximately five locations throughout the country. Anger over yet another eco-fascist “gas tax” seems to have been the straw that finally broke the camel’s back.

France is now facing the possibility of martial law or greater unrest and violence.

And the discontent being seen in France is also being felt elsewhere in Europe – most notably Belgium and the Netherlands. Although receiving much less media attention, the “yellow vests” have taken to the street in Belgium over many of the same concerns as their counterparts in France.

But while the French version of the protests was set off by the proposed increase of fuel taxes and ballooned into a movement addressing greater issues, there was no straw to place on the camel’s back in Belgium. There were no new fuel taxes announced or any other new policy that was receiving coverage in the media or causing discontent with Belgians at the time. The Belgian government is increasing the cost of fuel but the policy is not a new one. Belgians already pay the highest state taxes for fuel in Europe.

Interestingly enough, it seems that the “final straw” for Belgian was imported from France.

It is also reminiscent of the French Revolution when British oligarchs were constantly on guard for signs of discontent with the dreadful conditions in that country, lest the same thing should take place in England.

So Why Are The Protests Taking Place In Belgium?

France 24 summed up a number of Belgian economic grievances when it writes,

The demonstrations in both countries come from the same sense of struggling to make ends meet every month.

It began, in both countries, with the government increasing the cost of fuel. Belgians, for instance, pay the highest state taxes on diesel in Europe. The French government backed down on the proposed fuel tax increase, and Belgian ministers did the same, announcing the fuel prices would not be index-linked from 2019. But in both countries, the protests have continued.

According to Eurostat, the European Union’s statistical body, tax-to-GDP ratio rose across Europe in 2017. France tops the list, with tax revenue accounting for 48.4% of GDP, and Belgium follows close behind with a tax-to-GDP ratio of 47.3%.

Economist Philippe Defeyt told Belgian media RTBF that while the cost of living has increased in Belgium, so too has the average income – apart from the lowest-earners, who have been squeezed even tighter.

A Facebook group for Yellow Vests in Belgium lays out some of their demands to the government: lowering the retirement age, decreasing fuel excise duties, decreasing the cost of electricity and water, the choice of referendums at all levels of legislative decision-making, increasing pensions, improving public services and increasing purchasing power. The average price of electricity has risen €10 in the past year. Protesters describe a general “ras-le-bol fiscal”, or financial despair.

It’s a similar story in Belgium: in Brussels, salaries are €300 higher than the average salary in the rest of the country. With a capital that also doubles as the capital of Europe, Belgian citizens are frustrated by what they see as their lawmakers’ inability to solve problems closer to home.

One protester gestured to the European institutional buildings behind him while talking to a NBC Euronews reporter. “There, in ‘Europe’, they’re having fun, they’re laughing,” he said. “The people who make the laws are the ones driving us further into the ground. We have empty pockets. We shouldn’t be called the ‘yellow vests’, but the ‘empty pockets’.”

The protests in Belgium have been largely peaceful, but there have been some violent clashes as well. On December 8, police in Brussels blockaded a zone which houses the European Commission and European Council which essentially blocked in the protesters. When a group of protesters attempted to break through the barricade, there were clashes between them and the police. Around 400 people were arrested at the protest with three police being injured.

There seems to be people deliberately escalating the violence.

As was the case in France, there seemed to be the presence of anarchist wreckers whose only purpose was to fight with the police. Many of the Yellow Vest protesters denounced the “casseurs,” (translated “breakers”) and dissociated themselves from the violence.

It should be noted that while anarchists typically disrupt and discredit any protest they involve themselves in, it has been demonstrated in the United States that intelligence agencies and police will send in agents disguised as anarchists to do just that. One such instance was seen during the infamous WTO protests in Seattle in 1999.

It should also be mentioned that Belgium has been undergoing a quiet debate as to its future. As Wouter Verschelden writes for Politico, Belgium is debating which “club” it wants to belong to – Macron or Orban.

The latter refers to Viktor Orban, the Prime Minister of Hungary. Orban is bucking the Soviet-style EU system, George Soros’ influence over media, society, and academia, unfettered immigration, and radical leftist manipulation of culture. While Orban has made many moves that are concerning in terms of the rights of individuals, he has also kept his country free of the social upheaval and violence accompanied by hordes of immigrants and has done what he can to prevent Soros-funded organizations from disrupting the country and the culture any further than they already have.

When compared to a country like France that also violates human rights on an hourly basis while also suffering under terrorist attacks, racial and religious violence against native French people, and a stagnant economy, many Europeans are wishing their country had taken the nationalist track, not the internationalist one.

Protests in The Netherlands

There have been Yellow Vest protests in the Netherlands as well though the protests have drawn much smaller crowds and there have been no reports of violence.

In stark contrast to French President Macron, Dutch Prime Minister Mark Rutte has expressed sympathy for the protests, indicating that there will be “more money to spend” for the Dutch people and acknowledging the problems they are facing. Notably, however, there hasn’t been any explanation of how they will have more money to spend or what the Dutch government is going to do in order to ensure it.

At this point, the Netherlands protests seem to be more of acknowledgment of the Dutch crisis moreso than a mass movement against it.

Where are the European protests headed?

While no one knows just where the French and now, apparently, European protests are heading, there is clearly the sense on the part of the protesters and ordinary Europeans that they are losing their countries. They’re losing it to a globalist agenda whether it be Free Trade, immigration, eco-fascism, high taxation, low wages, or a confluence of all and more of those issues.

Only time will tell whether or not these protests will fizzle out, be co-opted, or succeed.