Florida Will Generously Allow Homeowners to Garden in Their Own Yards 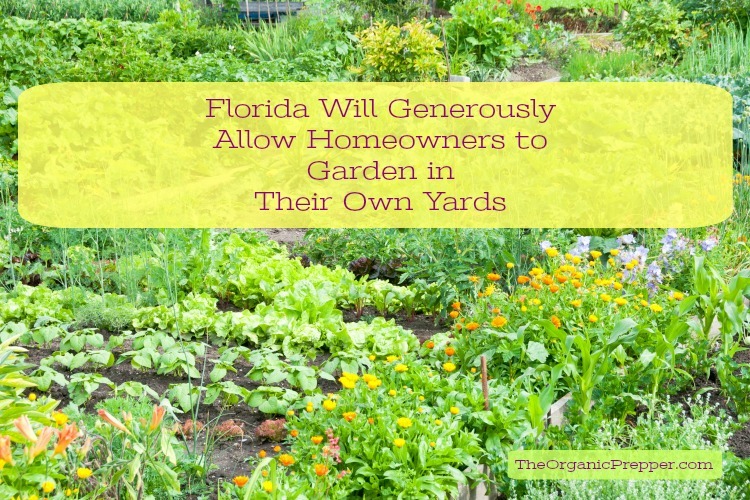 If you live in Florida and want the freedom to plant food on your own property, I have great news for you.

Here are some details on the bill from the Miami Herald:

Local governments, however, can still adopt a local ordinance or regulation that doesn’t specifically target vegetable gardens, like regulating water during drought conditions, limiting fertilizer use or controlling invasive species.

A couple was forced to rip out their garden.

While it might seem odd that people would need government permission to grow food on their own property, the bill was passed in response to a legal dispute about an ordinance in Miami Shores that banned gardens from being planted in front yards.

Hermine Ricketts and Tom Carroll, indignant at the fact that vegetables were deemed more offensive than boats, RVs, jet skis, statues, fountains, gnomes, pink flamingoes, or Santa in a Speedo in one’s front yard, took their case to the Florida Supreme Court, which ruled in favour of Miami Shores’ right to control design and landscaping standards. In other words, it was a loss for Ricketts and Carroll. (source)

“It’s all about conformity. Miami Shores wants to be a mini Coral Gables,” Ricketts said. “What is the definition of edible? I can go into any front yard and find something edible because every plant has an edible part.”

“That’s what government does – interferes in people’s lives,” Ricketts told the Miami Herald in December 2017. “We had that garden for 17 years. We ate fresh meals every day from that garden. Since the village stepped its big foot in it, they have ruined our garden and my health.”

The couple faced heavy fines for their front yard garden.

Ricketts and Carroll didn’t face jail time for daring to have a garden, but they did face $50 fines – DAILY – after the village amended its ordinance in 2013.

Back in 2017, the Miami Herald reported:

They had to dig up their garden, which won’t grow in their north-facing backyard because of a lack of sun. But they have continued to fight Miami Shores in court with help from the Institute for Justice, a national non-profit libertarian law firm.

“This decision gives local governments tremendous leeway to regulate harmless activities in the name of aesthetics,” said Institute lawyer Ari Bargil. “It gives government the power to prohibit homeowners from growing plants in their front yards simply because they intend to eat them.” (source)

An appeals court upheld a ruling that the couple does not have a constitutional right to grow vegetables in their front yard in November 2017.

In March of this year, the couple had a big win.

The front-yard garden ban got the attention of enough senators, and a new bill passed in mid-March that states that Floridians are now able to grow fruit and vegetables in their front yards without fear of local government fines.

The Miami Herald reports that Republican Senator Rob Bradley sponsored the bill and described it as a “vast overreach.” Given how many food deserts exist and how hard it can be for many families to access fresh and affordable food, such bans are an absurd step in the wrong direction. Bradley said,

“The world is changing when it comes to food. There’s a big interest when it comes to locally sourced food or organic products. It is our role, our duty to review decisions that are made in the courts that uphold local government actions that violate property rights in the State of Florida … When you own a piece of property, you should be able to grow food on that property for your family’s consumption.” (source)

Bargill, the lawyer who represented Ricketts and Carroll, said he is pleased with the new legislation, and added that he “looks forward to the day where no Floridian would worry about crippling fines for the offense of growing cabbage.”

This bill is a great start and may inspire others to follow suit.

The bill only preempts local government rules, not restrictions set by homeowners’ associations or other groups, but it is a move in the right direction, explains Treehugger:

But it’s a great start, and one that will hopefully inspire others to rip up their useless grass and plant some useful vegetables instead. The more front-yard vegetable gardens there are, the more normalized it will become – and the more secure the food system will be, too. (source)

Should governments regulate what kind of gardens people grow in their yards? What do you think about front-yard gardens?