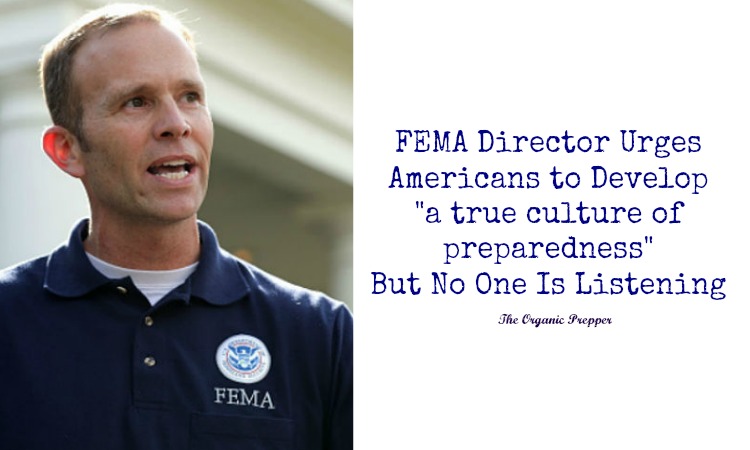 It looks like preppers aren’t that crazy after all. FEMA’s new director, Brock Long, has repeatedly said that Americans do not have a “culture of preparedness,” something that is much-needed with the startling uptick in natural disasters. Long has only been the director of FEMA since June 20 of this year and already has had to deal with a historic number of disasters in this short period of time.

It appears that Mr. Long has a mindset of self-reliance based on a couple of recent statements he has made to the media, but the MSM doesn’t seem too interested in his ideas about fostering a culture of preparedness, despite the practicality and essential nature of his suggestions.

First, in an interview from Sept. 11 that I personally only heard about yesterday, FEMA’s new director, Brock Long, spoke with journalists to discuss the response to Hurricane Irma. In the interview, he said some things that vindicate all of us who have spent time and money working toward being prepared.

“I really think that we have a long way to go to create a true culture of preparedness within our citizenry in America. No American, no citizen, no visitor to this country is immune to disaster. And we have a long way to go to get people to understand the hazards based on where they dwell, where they work, and how to be prepared financially, how to be prepared through insurance, how to have continuity of operations plans for their businesses, so that we can avoid the suffering, the strife, and the loss of life. It’s truly disappointing that people won’t heed the warnings.

Straight out of our favorite prepper handbooks, right?

Of course, the reporter quickly shifted from the actual useful information to start asking about climate change, because for some reason she felt that was far more essential than the practical advice Mr. Long was offering. You can watch the interview below.

Some of those numbers were shocking – FEMA is spending 200 million dollars a day in relief efforts and desperately-needed help has hardly even begun for Puerto Rico and the US Virgin Islands.

In a more recent statement, Mr. Long re-emphasized the need to be prepared, and to start kids off young with this mindset.

I think that the last 35 days or so have been a gut check for Americans that we do not have a true culture of preparedness in this country. And we’ve got a lot of work to do.

Whether it’s in education and being ready, it’s not just saying, hey, have three days worth of supplies ready to go. It’s greater than that. It’s also people having the finances and the savings to be able to overcome simple emergencies.

We have to hit the reset button and create a true culture of preparedness starting at a very young age and filtering all the way up.

We in the preparedness community have been saying this for ages, Mr. Long, but thank you for attempting to put this front and center.

One thing that is different about Long’s approach is the practicality. Many government officials seem to forget about the financial end of emergencies. They can’t seem to wrap their brains around the fact that while they have 200 million dollars a day, most folks do not. This is why financial preparedness is of such massive importance. If you had to live away from home without access to a kitchen, the expenses would rack up pretty quickly. As well, think about how thinly those millions are spread.

FEMA is eventually going to run out of money.

As well, think about how thinly those millions are spread. One person I know who lost her rental home will receive $4000. That has to replace everything she owns: furniture, clothing, personal items, food, cleaning products…you get the idea…plus pay first and last month’s rent for a new apartment. People without flood insurance who lost their homes will be eligible for a maximum of only $21,000. But if their property wasn’t paid for, they’ll still owe the mortgage payments on a place that is uninhabitable.

Don’t forget that FEMA is also providing aid for those displaced by more than 2 million acres of wildfires throughout the Western US. (Although initially, they turned down requests for assistance, they reconsidered.)

When you look at the true cost of disasters on this scale, it’s hard to imagine that FEMA will have enough money should these emergencies continue, or even enough to cover our current tab.

There were reports that FEMA had run out of money shortly after Hurricane Harvey, but more appeared for Hurricane Irma.

One article blithely suggested that FEMA can never run out of money because Congress will just vote to give them more when addressing concerns that FEMA was down to its last billion dollars.

But the U.S. Congress quickly put such worries to rest on Sept. 8, 2017, by hastily passing legislation that gave the DRF an infusion of cash.

“The emergency supplemental appropriation of $7.4 billion allows FEMA to continue to fully focus on the ongoing preparation, response, and recovery needs,” said an agency spokesperson via email.

While legislators may have cut it a bit close, there was little chance that FEMA actually would run out of cash. According to a Congressional Research Service analysis, Congress made 14 supplemental appropriations to the fund between 2004 and 2013, for a total of $89.6 billion. In one year alone — 2005, the year that Hurricane Katrina devastated New Orleans and other areas in the Gulf Coast — legislators bolstered the fund with three extra appropriations amounting to $43 billion. (source)

This, of course, naively assumes that there will always be more money to give to FEMA. Eventually, we’re going to run out.

Is this the reason for the slow response to Puerto Rico?

Personally, I keep wondering if a lack of money is the reason for our slow response to the desperate situation in Puerto Rico. Add to this the logistical problems, and you have a recipe for chaos.

Another thing to keep in mind about Puerto Rico is that this is one of the rare situations in which stockpile preparedness may not have done any good. While some folks like to say that Puerto Ricans shouldn’t be out of food within 6 days after the disaster, what they aren’t considering is the totality of the destruction. 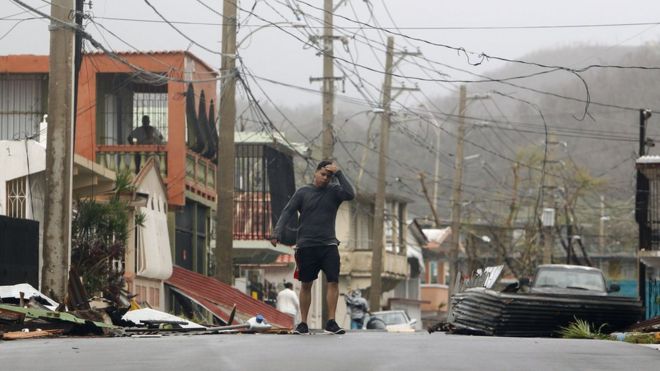 What food people may have had stored was destroyed when homes were turned into piles of rubble. Other food spoiled soon after the power for the entire island was taken out. If you look at these photos, you will understand why few people have food.

I imagine in such a situation, my own carefully preserved jars of food would have been smashed to bits and my freeze-dried food would have been soaked in flood waters. In most situations, your stockpile will see you through, but in a disaster of this magnitude, even the most well-prepared person could be left with nothing.

Perhaps this reality is why Mr. Long is so adamant that Americans need to get prepared to take care of themselves and that we need to raise our children to understand this too. That’s not the warm fuzzy thing that people who refuse to prepare want to hear, so the mainstream media gives his advice little attention. If you are interested in being better prepared, be sure to sign up for this daily newsletter.

A culture of preparedness is indeed the answer, and preppers have known this for a very long time.