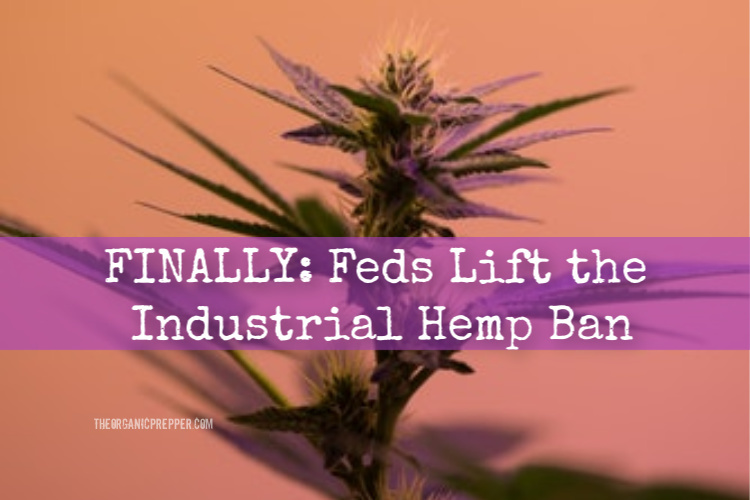 A long-held federal hemp ban has finally been lifted in the United States thanks to provisions in the newly reconciled Farm Bill.

In case you haven’t heard, hemp could literally save the world and certainly didn’t deserve to be in the Controlled Substances Act. However, it was kept there through a misinformation and propaganda campaign spearheaded by corporate interests.

The uses for industrial hemp are innumerable but until now, production of hemp was banned by the federal government. Therefore, most hemp products were imported at great cost and prevented valuable jobs in the U.S.

Hemp is simply a variety of Cannabis sativa that is bred for industrial use. Marijuana (C. Sativa, C. Indica or C. Ruderalis) is a name for a strain of C. Sativa that has the frosty, flowering buds where all the resin (cannabin) hangs out. That’s the one with the euphoria-inducing tetrahydrocannabinol (THC).

Due to the rise of chronic pain in the U.S. (and subsequent opioid addictions), the desire for CBD oil has exploded. CBD – which doesn’t get you high – is an oil made of concentrated hemp oil. The ingestible and/or topical oil has been recently attributed to alleviating issues such as inflammation, anxiety, and insomnia all the way down to seizures and Parkinson’s symptoms.

Unfortunately, hemp was inaccurately mixed in with the nonsensical “reefer madness” smear campaigns that were driven by industry interest. The oppressive restriction on CBD oil – due to the deliberately fabricated misconception that it is marijuana and can somehow get people high – means that CBD oil is pretty cost prohibitive in America.

Now, lawmakers have conceded a reconciled version of H.R. 2: The Agriculture Improvement Act of 2018, also known as the 2018 Farm Bill.

NORML (National Organization for the Reform of Marijuana Laws) Political Director Justin Strekal said of the new provisions of the reconciled Farm Bill:

For the first time in nearly a hundred years, commercial hemp production will no longer be federally prohibited in the United States.

This represents a significant and long overdue shift in US policy. Nonetheless, future regulatory efforts will still be required to address emerging consumer issues when it comes to the commercial sale and marketing of certain hemp-derived products, particularly so-called hemp-derived CBD extracts. For years, many of the producers of these products have navigated in a grey area of the law — manufacturing products of variable and sometimes questionable quality and safety. Now it is time for lawmakers to craft simple benchmark safety and quality standards for hemp-derived CBD in order to increase consumer satisfaction and confidence as this nascent industry transitions into a legal marketplace.

The hemp-specific provisions – which Senate Majority Speaker Mitch McConnell (R-KY) included in the Senate version of the bill, but were absent from the House version – amend federal regulations to further expand and facilitate state-licensed hemp production, research, and commerce. The language also for the first time amends the federal Controlled Substances Act of 1970 so that industrial hemp plants containing no more than 0.3 percent THC are no longer classified as a schedule I controlled substance. (See page 1182, Section 12608: ‘Conforming changes to controlled substances act.’) Certain cannabinoid compounds extracted from the hemp plant would also be exempt from the CSA.

Hemp can help our country and the world

For starters, it can create massive amounts of jobs for America. Currently, we import hemp products from Canada and China.

Hemp can be used for the following:

The Misinformation Campaign Against Hemp

Technically, CBD is legal in all 50 states, but the DEA laid its crosshairs on it when it reclassified the substance to a Schedule 1 substance.

Because of the anti-drug propaganda – again, mainly in the U.S. – citizens and law enforcement alike are confused on the topic. In one embarrassing scenario, police in began shutting down stores that were selling CBD. Interestingly, they may have been acting within the law because of the language of the reclassification…

The lifting of the ban could mean we could produce hemp-based foods, clothing, housing and so much more. It takes only 14 weeks to grow enough hemp to build a house and that antimicrobial house could last hundreds of years. One acre of hemp can produce as much paper annually as four acres of trees,” writes Green Flower.

Here are the industries that stand to lose out to hemp

With the lifting of hemp production bans, the following institutions will be quaking in fear. Of course, they themselves could convert to hemp production:

Since hemp and marijuana have been so intertwined in our political War on Drugs, you should know that the following institutions have been fighting against marijuana legalization for many years now:

A pharma company that spent $500,000 to keep marijuana illegal also got DEA approval to create synthetic marijuana. And the company was embroiled in lawsuits for “its aggressive marketing of a product containing the potent and deadly opioid painkiller fentanyl.” Yes, the government is truly concerned about dangerous drugs…

At this time it is unclear if there are provisions in the newly reconciled Farm Bill that are detrimental to farmers, but the Internet seems to be cheering the recent breaking news that hemp bans have been lifted at the federal level.

This could be the first time that the U.S. has gotten with the program on industrial hemp production due to the government’s pretense that it’s the same strain as the marijuana used for drugs. And as a result, we were economic benchwarmers who import hemp seed and the occasional textiles while the rest of the world gets in on the action.

House and Senate legislators will still need to vote on the “engrossed” version of the Act, however, they are expected to do so by the end of the year.

What are your thoughts on the hemp ban being lifted?

What do you think of the reconciled Farm Bill? Will the new hemp production provisions help the country? Sound off below!