Dealing with a disaster is often exhausting and staying alert can be especially challenging during a prolonged crisis. However, strategies to stay in top form during and after calamities are not something that most people think to include in their emergency preps.

Sleep deprivation, stress, and other issues that are commonly associated with disasters often lead to survivor’s burnout.  If not properly managed, this fatigue can compound existing problems when the crisis lingers for days, weeks, months, or longer.

This article will address one of the most critical aspects of survivor’s burnout: sleep deprivation.

At one time or another, most of us have functioned quite well without sleep and we didn’t burn the house down, drop the baby, or get into a wreck. We usually managed to do whatever we had to do, regardless of how tired we were. But how well will we perform during an intensely stressful or prolonged disaster event?  We may survive the initial crisis then fail miserably because of mistakes made when we are fatigued.

Sleep deprivation can be deadly

Statistics that link serious mistakes to sleep deprivation are astounding. A look at a few surprising details about them will show why it is a good idea to be well prepared to fight this potentially deadly impairment that can strike when we least expect it to happen

The surprising thing is, many accidents usually occur when we think we are in total control.

But it is no surprise that tired workers are 70% more likely to be involved in accidents than well-rested workers. Fatigue contributes to a large number of accidents on the road as well.

It is particularly noteworthy to consider that some of the world’s most horrific disasters in history were caused by highly skilled people who excelled in their professions, but were working while fatigued. Here are just a few of many disasters that have been linked to fatigue and sleep deprivation:

There are many more accounts of disasters caused directly or indirectly by fatigued, but otherwise highly skilled people.

If we don’t take rest breaks, our minds may take total leave of absence without our consent.

Even the best of us can lose our usual ability to react quickly to signs of danger when we are tired and weary. But why do so many obviously qualified people make serious mistakes? Could we also fail when under pressure or deprived of sleep?

New Scientist Magazine points out that “Our performance crumbles when we are tired. This is due, so we think, to episodes of involuntary “microsleep” lasting several seconds. Succumb to microsleep at the wrong time and you won’t respond fast enough when something goes wrong.”

Researchers have found that microsleep happens when parts of the brain go to sleep while other parts are still active and awake. Now, that is scary stuff.

Lost sleep? You might as well be drunk or brain-damaged.

Losing sleep has much of the same effects on our body as being drunk. According to the Sleep Foundation, being awake for 18 hours affects your body as if you have a blood-alcohol level of .05, and 24 hours of lost sleep is the same as being too drunk to drive. (Having a blood alcohol level of .08 means you are legally drunk enough to get a DUI/DWI ticket.) 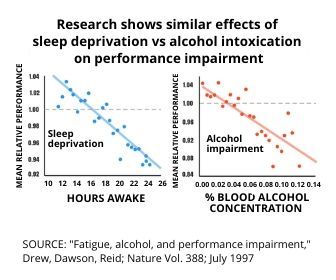 Sara C. Mednick, Ph.D explains why sleep deprivation has such devastating effects on the brain. She states in her book, Take a Nap! Change your Life: The Scientific Plan to Make You Smarter, Healthier, and More Productive, “No single organ is affected by lack of sleep more than the brain. In order to function, it must metabolize the glucose that it receives via the circulation of blood. Neither process is possible without sleep.”

How prepared are you to deal with severe exhaustion during and after disasters?

Most of us reach for caffeine and other energy boosters to push through fatigue. The problem with that is they may work up to a point, but might not be enough to counteract the dangerous effects of prolonged stress and sleep loss.

A committee of scientists published a report that showed how “the danger of an error due to sudden overwhelming sleepiness increases progressively with continued sleep loss or “sleep debt.” Most individuals cope with significant sleep debt by physical activity and dietary stimulants. Coping mechanisms can temporarily make an individual completely unaware of dangerous accumulated sleep loss.”

So, when we think we feel alert and ready to roll after a few cups of coffee, we may not be on top of our game as much as we think we are.

Performance and critical thinking skills naturally degrade as our sleep debt grows. If we are in a situation where we need to be on high alert, being loopy from lack of sleep could cause us to become a liability to ourselves and those around us.

It’s easy to lose sleep during and after disasters, especially if our lives are upside down. Loss, grief, fear, stress, physical injuries, and existing dangers all take a toll on our peace of mind and can rob us of much-needed rest. Here are some strategies to help minimize the chances of making serious mistakes that often go along with sleep debt.

Recharge and power through crisis events with these strategies

As mentioned above, most of us reach for caffeinated drinks when we need a boost to power through long days when we are tired, but if we are also suffering from lack of sleep, we need something more substantial.

Although we may not have the luxury of getting a good night’s rest during or after disaster events, here are ways that we can trick our mind and body into feeling rested even if we are not in a position to get optimum sleep. One of them is power napping.

Master the art of power napping

Not all naps produce the same results, but you can choose the right kind of nap for your needs. Some naps will give you enough pep to hit the ground running when you wake up; other naps will take you longer to shake off the groggy feeling before you can get up to running speed. You can customize your naps to increase energy, help keep your spirits up, improve cognitive function, and reduce the overall effects of sleep deprivation.

It’s all in the timing

Sleeping for 15-20 minutes slows down brain activity long enough to recharge your internal “batteries” enough to give you temporary alertness and energy. It is recommended that on long trips, you should take a brief nap (not longer than 20 minutes) at least every four hours.  The same principle can apply to help you stay alert during and after disaster events.

If you are a coffee lover, you might want to down a cup just before a short nap. In about 15 – 30 minutes, the caffeine will kick in, and its effects will be felt about the time you wake up from your mini-nap. Rowrr!

A few words of caution: too much caffeine in your system can wreak havoc in your body. The Mayo Clinic advises, “Up to 400 milligrams (mg) of caffeine a day appears to be safe for most healthy adults. That’s roughly the amount of caffeine in four cups of brewed coffee, 10 cans of cola or two “energy shot” drinks.”

If critical thinking skills and cognitive memory is your goal, then a 60-minute nap will help you to keep track of facts and to think fast on your feet. Dr. Sara Mednick says that this is because a one-hour nap usually includes the slow-wave type of sleep which is important for cognitive memory processing. This type of nap may also take longer to shake off the groggy feeling afterward, so allow yourself time to adjust to the longer wake-up time.

A 90-minute nap is the best kind for improving mood, learning, creative thinking ability, and coping skills.  For most people, the first 90 minutes of sleep includes a full cycle of rapid-eye-movement (REM) sleep, which is the dreaming phase. During the course of a full night’s sleep, we usually spend about a quarter of it in the REM stage, which recurs about every 90 minutes.  Dr. Mednick notes that a 90-minute nap does not usually result in sleep inertia or a groggy feeling when we wake up.

Regardless of which type of nap you choose, consider these strategies before you snooze:

Do what you can to get comfortable

Naps are no substitute for a good night of sleep.

Naps can help us power through rough days, but they are no substitute for seven or eight hours of sleep which normally contains four or five REM cycles. Studies show that we have linked a lack of enough REM sleep to reduced coping skills and abnormal defensive responses to threats, both of which are critical for survival.

So, as soon as you are able, make it a priority to get adequate rest to help you stay sharp, keep your spirits up, and to function at your best to meet survival challenges safely during and after a long crisis.

What are your favorite tips and tricks for preventing burnout caused by fatigue? Please share them! Your comment could be valuable to others in a survival situation.