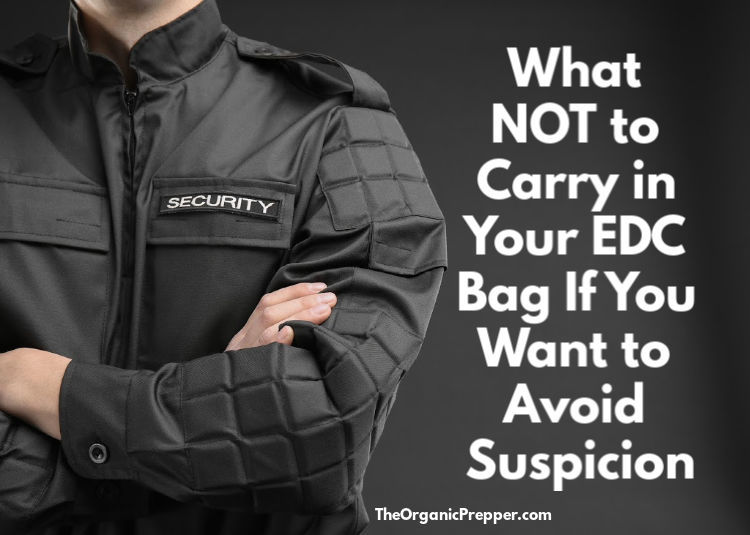 Whether you’re a social butterfly or a homebody, we have to go out sometime, and we shouldn’t forget our EDC Bag (Every Day Carry). But have you looked in your EDC Bag lately? Once you’re inside a store, it could be too late.

If you’re like most preppers, your EDC replaces your purse, your shoulder bag, maybe even your fanny pack, as it contains almost everything you need while you’re out, from keys and wallets, to hand sanitizer and tissues. Imagine walking through a store and needing a tissue. You’d reach in your EDC and grab one. Innocent enough, right?

Maybe not to security, especially during busy times of the year when they’re on double duty.

Can employees at shops and stores search your bags? The answer is tricky. Legally, in most states, if the store has reason to believe you are shoplifting, they can ask you to show the contents of your bag. The fastest and easiest thing to do, even if grudgingly, is to open your bag and show them.

You can, of course, decline, but again if the store has reason to believe you are shoplifting (which they now probably believe even more), they have the right to detain you until the police get there. According to Legalvision:

“Your employees have the right to ask customers to open their bag to check the contents upon exiting the store. They are allowed to look into the bag but they are not permitted to touch any of the contents. If their view is obstructed, the customer is expected to move items within the bag so your employee can see properly. As an employee, you can ask the customer to move the contents.” source

When you are carrying your EDC kit, this can be a problem, however.

So imagine your EDC bag gets searched.

What will they see?

An unopened bottle of water that you just happened to buy from their store last month – just for your EDC? A tin of Altoids? A needle and thread kit like the ones they sell? How about a mini bottle of hand sanitizer that can be found in their bins?

Hopefully, you see where I’m going with this. Whether the contents of your bag are from the store you’re in or not, the employees aren’t going to know. Most will likely call for security and attempt to detain you just by what they see. More often than not, trying to explain you’re a prepper will only cause more incredulous looks and therefore more determination to seize you and the contents they believe you’ve stolen.

How do we avoid this scenario?

One way is to break an item down. By that I mean unwrap items, don’t store them in your EDC still in the external packagings you bought them in – if feasible. Instead, remove any external cellophane and take the price tags off. If you choose the little packets of OTC pain medicine, remove the cellophane.  Tissues can be opened, or better still, removed from the cellophane and wrapped in something else more usable like a handkerchief closed with a safety pin, or put into an Altoids tin. The point is to show that the item hasn’t been lifted from the store, but already bought and paid for, and in use.

Another way is to add to the item. Those little plastic canisters of acetaminophen? You don’t have to break the seal of the cannister if you don’t want, but instead wrap a length of black electrical tape around the center (that always comes in handy) before adding it to your bag. Same for ibuprofen.  Anything cylindrical should have something wrapped around it if possible – if nothing else than for redundancy.  Paracord, duct tape, electrical tape, string, needle and thread, and so forth. Hand sanitizer? Put the little bottle in a zip lock baggie. That way it won’t leak onto the rest of your supplies, and nobody will expect you to bring a little plastic baggie into the store just so you can steal something in it.

What about small individual packages of snacks, like crackers and peanut butter/cheese spreads? Or the small individual bags of peanuts, sunflower seeds, or beef jerky? These can be tough because while they’re sold in bulk in the store, some are also sold individually at the registers. The best way to put these in your bag is, again, by adding to it. Put the still sealed pkg. in a plastic baggie along with a few pieces of individually wrapped candies (like starlight mints). Wrap a few slim jims with a couple of rubber bands. Again this tends to show that the item was bought earlier and not just lifted – it shows a thought process of ‘packing’ for a later time when you might need a snack or need the sugar.

What about water and other bulky items?

Water can be a tough one to explain. After all, we’ve already established that a person can’t always just walk away free by simply stating they didn’t steal something, and opening/unsealing the water is not necessarily an ideal option. With bottled water sold just about everywhere, including in coolers at checkouts, this is a definite ‘plan ahead’ item.

You could put some things around the bottle – like the tape or paracord we’ve already mentioned, and that may work, but an alternative is worth considering too. Having a water bottle in which you put water every time you go out and empty every time you go home is good, but more than one will be heavy. Daisy takes this water filtration bottle everywhere, which is a multitasker. You can carry water in it and filter water with it if the need arises.

Water pouches are a good alternative for EDC as they’re smaller, lighter, and usually not sold individually in stores. Plus, many of these are small enough that they too can go into a baggie or container.

Then, of course, there’s your flashlight and maybe a pocketknife. Try to choose a flashlight that you can securely clip on the outside of your bag. If it’s in sight, you clearly aren’t trying to hide it or steal it. Many good flashlights (small tactical ones included) have a clip with which to attach to something just like this. In this way, you can possibly avoid questions as to the validity of ownership, and you won’t have to fumble for it in the dark.

If you don’t have a concealed carry license/permit, you may be carrying a knife. Obviously, you’re not going to want it in a little baggie, but rather right where you can get to it if you need it. That weapon might be a good pocketknife. For some, a pocketknife belongs in the pocket, just as it’s called. For others, it belongs on the belt in its own sheath in plain sight.

It must be remembered though, that laws can dictate where your pocketknife is kept in regards to your person. Some states dictate whether it can be concealed or not according to the length of the blade. Some states have illegal models, such as the switchblade, but a Swiss Army Knife, Leatherman, or other multi-tool knives with small 1″ blades, probably won’t cause a problem if it’s in your bag. However, I strongly advise you to check your local and state laws on carrying knives before actually carrying one. (In some states, certain knives can come with felony charges.)

So, provided you can legally add a knife to your EDC, how are you going to prove you didn’t steal it from the store? Use it. Whittle, cut, scrape, do whatever is appropriate with that knife. Then clean it and put it back in your bag. Chances are your usage will show. If not, or if you want to be doubly safe, keep a receipt for the knife in a secure spot in your bag.

If you carry a firearm in your EDC, this could spark alarm for some people. Nothing will get the cops called on you faster, these days. Always be sure you are aware of the laws for your state regarding concealed carry of a gun.

For more information about EDC bags, check out these articles as well.

Are there items you take special precautions with when putting them in your Everyday Carry bag? Have you ever had to explain the contents? 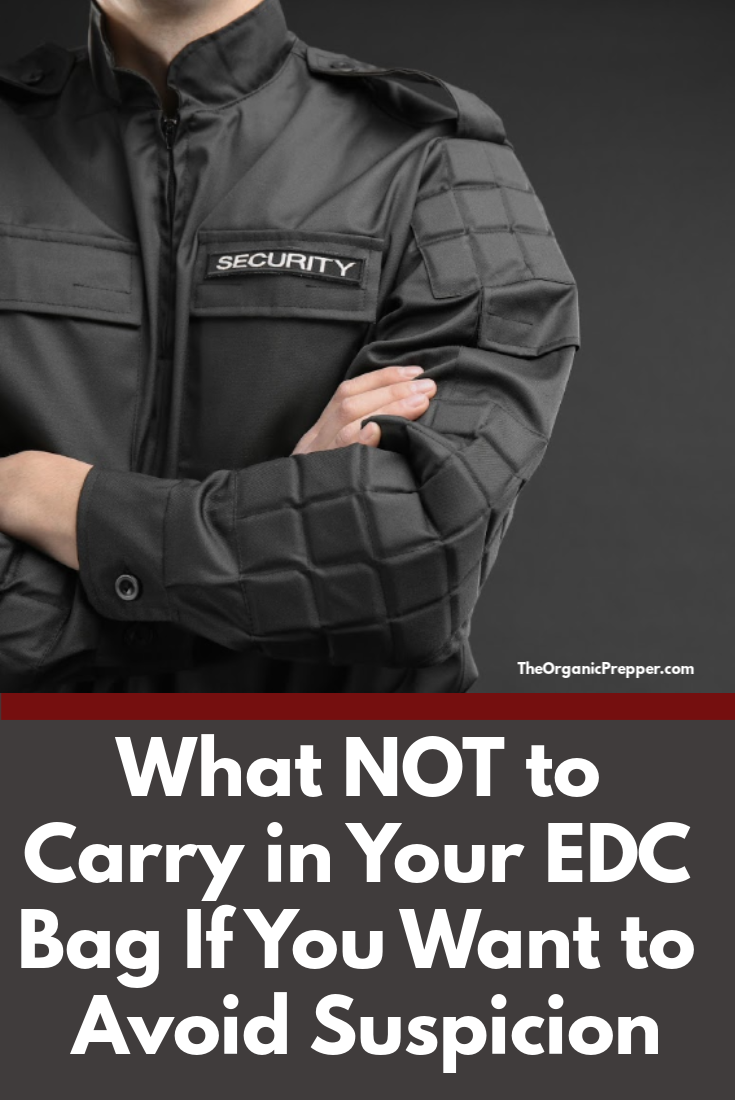