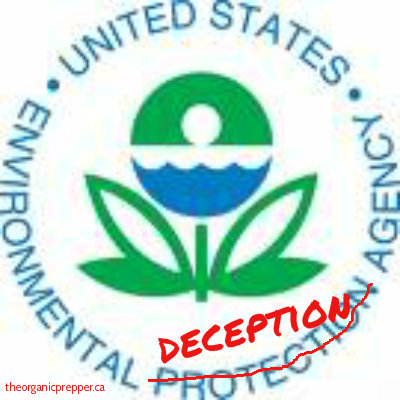 Great news!  You no longer have to worry about excessive levels of glyphosate, the toxic chemical found in Monsanto’s Round-up pesticide, in your food or in the feed that livestock consumes.  Why not?  Well, the Environmental Protection Agency has looked over the situation, and in their infinite wisdom, raised the safety threshold of glyphosate that is allowed to be in consumable goods.

The EPA’s change of heart means that the the allowed glyphosate level in animal feed will rise to 100 parts per million (ppm) and 40 ppm in oilseed crops.  Thankfully, there’s no need for us to worry because they’ve assured us that the new allowable levels are only “minimally toxic” to humans.

The EPA is the agency that is charged with protecting the air we breathe, the soil in which we grow our food and the water that we drink. Unfortunately the only responsibility they seem to take seriously is their commitment to furthering the agendas of big business.  This decision to allow more Roundup to drench the food supply comes immediately after two major, peer reviewed studies have proven that glyphosate is deadly.

The Organic Consumers Association is very concerned.  They are behind a petition to lobby the EPA to lower the allowable glyphosate levels instead of raising them. (Find it HERE)  The OCA cites numerous reasons why the EPA’s current move is a deadly mistake:

So why would the EPA make this ruling?

Because instead of being an unbiased agency looking out for public interest, they are merely puppets for the biotech industry.  They spread disinformation from beneath a cloak of benevolence and authority.  They use the trust that people have put in them to deceive and manipulate the public in favor of big business.

Here are some examples of their incestuous partnerships:

The EPA has been accused of covering up crimes committed by public health enemy #1, Monsanto, as well as Dow Chemicals.  The EPA’s investigation proved that Monsanto knowingly tainted Lysol (used by moms everywhere to sanitize babies’ toys) with dioxin.  However, no criminal charges have been forthcoming as of this publication.

The EPA also quietly closed an investigation of Monsanto’s twisted cover-up in the Nitro, West Virginia herbicide plant accident that exposed hundreds of workers to deadly carcinogen dioxin, which can still be found in nearby streams and lakes. Despite the fact that this investigation simply disappeared, Monsanto agreed in February to pay $93 million dollars to residents of Nitro in order to settle a class action lawsuit.

The EPA has refused to ban a pesticide made by Dow Chemicals, the controversial 2,4-D, the same substance used in Agent Orange. This pesticide will be used on corn crops that have been genetically engineered to be resistant to the toxin.  Agent Orange causes cancer, hormone disruption, genetic mutations and neurotoxicity and will be soon be coming to a corn field near you.

The EPA has refused a petition to ban BPA in industry, citing a lack of scientific evidence of the negative effects of the chemical. BPA is commonly found tainting canned goods, especially soup, and bottled water that has been exposed to heat. (Author’s note:  It would probably be very expensive for industry to have to replace all those containers with BPA-free cans and bottles.) (source)

The EPA pulled an identical sleight of hand when radiation from the Fukushima disaster began to reach the United States in 2011.  They raised the acceptable levels of radiation, stopped measuring it, and even tried to convince us that a little radiation was actually good for us:

Since our minds can be at ease now, the EPA has decided that they are no longer planning to monitor the radiation levels in our food supply.  They will return to their previous practice of only monitoring random samples every three months.  Yep.  Really.  The Environmental Protection Agency of the United States is no longer monitoring radiation levels in our food and water supplies as of April 14th.  That will definitely keep them from getting those inconveniently high readings that might affect Big Agri’s prosperity.  (source)

Therefore, we have to resort to other means to spread the word. We have to be so loud and so adamant that even the sleepiest individual will have no option but to see what is going on.  So, your mission, should you choose to accept it, is to “out” the EPA for this disastrous decision.

Please understand, the system is irrevocably corrupted. Only by shedding light on this corruption can we make a change.  People are being lulled into compliance, all the while, feeling that there are measures in place to ensure that what they consume from the grocery store is not poison.

Food safety should not be in the hands of the highest bidder.