The Deadly Force Continuum: Are You Mentally Prepared to Defend Yourself?

We often talk of defending ourselves in various ways and with many different weapons. Close to where I live is a walk-through shoot where the customer can take a live weapon through an obstacle course type building. I’d absolutely love to go through just to see how I would react in a break-in or defense simulation. Short of that, my family and I have trained repeatedly with squirt guns in clearing and defending our house.

In reality, though, we don’t really have a good idea as to how we’d react in a situation where we’re attacked or our lives are threatened, so unless we’re actually in that situation, we’ll never know. We talk and guess about it all the time, but in a real live attack, in an SHTF situation, the whole body, mental and physical, can be seriously threatened which means it’s entirely possible that we just stand frozen with a gun pointed at someone. We could also go the other route and completely unload the magazine into them. So, we could theorize, and we can, and should, train as much as we’re able to so that we’re as prepared as possible. But how do you train your mind?

How much force should be used when defending your family?

The United States Military and Law Enforcement Agencies across the United States have policies/rules that guide their use of force in any given situation. These policies are called by different names; Escalation of Force, Use of Force Ladder, Deadly Force Ladder, Deadly Force Continuum, Use of Force Continuum, etc., and they all appear interchangeable. The National Institute of Justice (NIJ)  prefers to call them “The Use-Of-Force Continuum”, but despite the different titles they all provide guidelines regarding how much force can be used against a person, which also can be used as guideposts much like the EOF (Escalation of Force). (Just a special note here: The Deadly Force Continuum, or Escalation of Force, is used in some part with our Military’s Rules of Engagement. So you can see that these guidelines are used by all types of organizations that deal with potential threats.).

Disclaimer: Before going any further, please make note that each state and country has laws regarding the use of weapons and deadly force. This article only pertains to a time when there is a direct absence of the Rule of Law. As mentioned before, these are simply guidelines that are set up to dictate how much force we use and when. This article does not replace local, city, state, country, or global (?) laws.

The concept of the Deadly Force Continuum and how to apply it to ourselves is pretty simple to understand. Each one of us can set one up for ourselves and/or our households. They can be tailored for each individual household, each individual, and varied situations we may find ourselves in. They can be used to help us decide when to take things to the next level. As an example, I’ve included one of my “ladders” (I call mine a Deadly Force Ladder because my daughter learned it as such in the Navy) I use in certain situations. 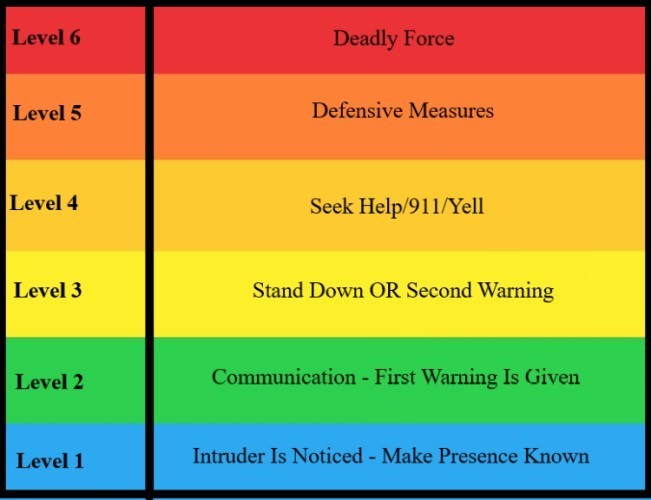 Again, this is my personal DFL. I live in a state that allows personal defense and recognizes the Stand Your Ground and Castle Law.

You may want to create your own Deadly Force Ladder.

For a time when the Rule of Law is gone, everyone might want to make their own, tailored to their specific needs. Why? So that if you reach level 3, level 4, or end up going all the way through your highest level, you can mentally justify each action with little to no guilt. You can remind yourself if you absolutely have to physically hurt someone that you gave them every chance to get away; that, short of running away yourself (which IS a viable option that is not shameful or wrong), you did everything you could to prevent using deadly force.

As level 1 indicates, an intruder or danger is noticed. At this level, you can either make your presence known or try to get away unnoticed. Both have pros and cons. I’m usually in a position where I would have to make my presence known, and to be totally honest I’d already have a weapon in my hand anyway. Usually just seeing an indication of someone or a presence in the area would cause an intruder to move along to find an easier target. Turning on a porch light, even just a house light, or clearing your throat in some cases, can alert someone to your presence. If they’re stubborn, or incapable of seeing/noticing you, Level 2, a verbal shout out to ‘go away’ should send them running.

At level 3 you may realize you know the person(s) and end up yelling at them for scaring the wits out of you. If that’s the case you would disengage/stand down. If that’s not the case, and they are clearly strangers and insist on continuing, there are mere seconds between level 3 and level 4. Personally, if I have to give a second warning, I have my phone ready to dial 911 anyway, shaving some time off the arrival of help should I need it. Also, keep in mind that the second warning doesn’t have to be verbal. Rack a shotgun and see how fast a potential intruder turns tail. Same with a semi-automatic. You can also blow an air horn, car horn, a whistle, break glass, anything that makes a lot of noise and frightens the would-be attacker. They don’t want noise because it alerts others to their actions, and they almost always take the route of least resistance. If you’re going to put up a ruckus, they may well decide it’s not worth it.

As you can see, we may already be knee-deep in level 4 and hopefully, 911 is headed your way and/or neighbors and friends are at your side. You can also choose to call 911 earlier than this level – it absolutely has to be tailored to you.

Level 5 is Defensive Measures. This can be things like hiding, (yes, the intruder knows you exist but not necessarily where you are), barricading yourself in a room to give help time to arrive, throw marbles or caltrops on the floor leading to where you are, make use of broken glass, etc. Think ‘Home Alone’. Obviously, if you can get out safely and get away this should have been done way back at level 3, but if you didn’t, yet find you can now, go!

Level 5 can also escalate into scratching, biting, punching, kicking – everything but deadly force. Obviously, you don’t want to enter a knife fight with just your fist, but if you have a glass lamp that can help even the odds. So can an empty rifle. Just swing it like a bat. And if you find yourself behind someone and can knock them out with a baseball bat to the head, go for it. Then hog tie them and wait for the police, or run and call the police. Several graduates of Hand to Hand training can tell (and teach) you of many ways to disable an attacker/intruder, as can many of the different Martial Arts trainers. I myself have taken Shaolin Do and Taekwondo and would encourage most anyone to investigate a martial art or hand to hand combat/self-defense school/class. For martial arts, I would highly recommend Tai Chi for everyone.

Being around guns, gunmakers, and avid gun owners, I always heard “Shoot to Kill”.  I used to think that was wrong – that going into a situation prepared to kill someone was wrong; that I was betraying myself and my faith/values by being ready to kill. But I was the one who was wrong because I wasn’t seeing it from the proper perspective.

It wasn’t my goal to kill anyone, but rather it was my goal to protect my children, my family, myself. If in the process of doing that, I killed someone, I had to be able to deal with it. That is what it means to shoot to kill; to be prepared to kill someone. Knowing that, from the beginning, you may have to end a life, mentally preparing yourself to do so, and then to cope with it afterward if you do.

The Deadly Force Continuum, or Ladder of Force as I call it, provides us with guidelines that allow us to take each step with confidence knowing that we’ve done what we should in our situation before steadfastly moving forward. We can tweak each step if need be and apply them to our own personal situations, allowing for our own hang-ups or idiosyncrasies, and then be able to remain as emotionally strong as possible regardless of the outcome.

Have you created your own deadly force guidelines? If not, will you consider creating them? What would you include in yours? Please share your thoughts in the comments.

How to Prep for a Cyberattack