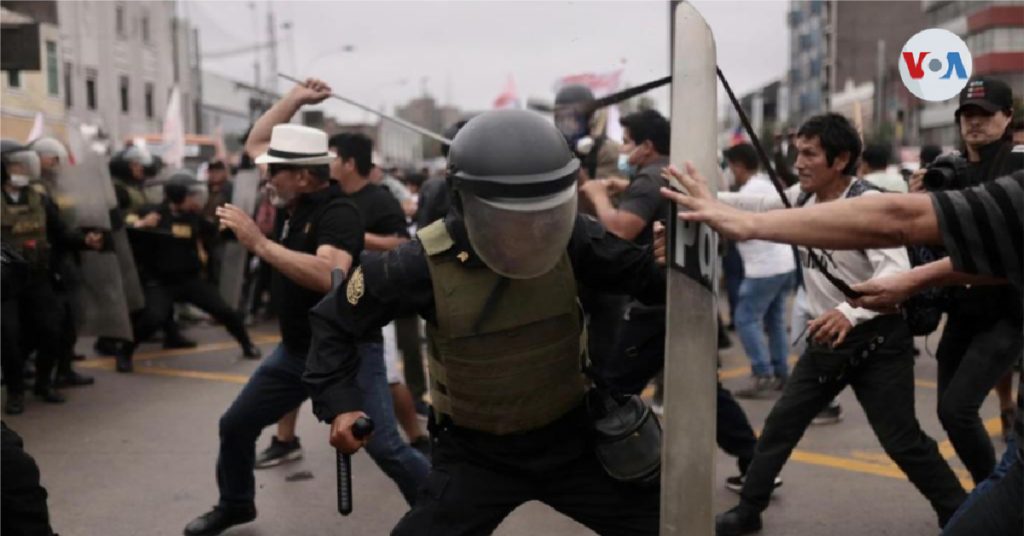 We all know how political turmoil can get out of control quickly. Misinformation, confusion, and uncertainty are abundant these days. Fueled by enormous and powerful corrupted elites that need to undermine the strength and health of the economies and political influence of the Western part of the world, they seem to be unstoppable.

That said, I will not go deeper than necessary in the political events, rather than explain the scenario my fellows in Peru are going through, and our experiences in my country.

One of them said that the environment and atmosphere he perceives are the same in Venezuela in 2014-2016 when people were battling with the regime on the streets while the world just watched without interfering. Chinese Communist Party provided riot equipment, tanks, ammunition, tear gas, and weapons to massacre Venezuelans.

The truth of what is happening in Peru is as follows.

Going against popular will, Castillo is pursuing the guidelines of the infamous “Foro Do Sao Paulo”; an organization working as a Chinese/Russian proxy to allow them to install puppet governments to control South America.

They modify countries’ Constitutions, tailored by the international communist gang, to their interests, with the correspondent nullification of their sovereignty, in a modern adaptation of the pattern the URSS used with their satellites back in the day.

Brazil, thanks to its massive size, strong economy, and large population was the choice as the main headquarters of that international gang. The first country (the jewel of the crown because of its strategic position and immense resources looted by the gang while the West just watches) falling down, of course, is Venezuela. The other ones were Ecuador, Argentina, Chile, Colombia, and Peru.

This is for you to understand the context and the surroundings where one of my friends is right now with his family. Lima is peaceful, but the rest of the country is under widespread turmoil.

The situation is still going to be tense for a while.

The Castillo followers built roadblocks on the main roads to protest and bring him back to the chair after he tried to dissolve the Congress, which their Constitution forbids. Of course, the media supporting Castillo have said this is spontaneous; it really obeys a well-elaborated plan.

My friend was in a very small town near the city of Trujillo, waiting for his clearance to work on a nearby mine. The roads were blocked, and this made it impossible for the company to drive supplies to the mine.

Then, the order from his office was for everybody except the essential personnel to come back, as all laborers stopped until further notice. He was already in a hostel, as they could not arrive at the camp in the first place.

What to do when unrest breaks out

Once he told me this, I told him to proceed as follows ASAP:

These are basic precautions and apply in ANY place you are. Granola bars, my mil-spec plastic canteen, and some other stuff like homemade bread, homemade sugarcane rolls, jerky, plantain fried slices, and fruits, in my backpack, are mandatory items on every trip. A few pills, vials with lactobacillus for stomach disorders, and a basic first aid kit. I do pack my ultra-light water filter wherever I go. It weighs close to nothing, and I can drink tap water after treating it with purifying pills in a mineral water bottle I can get anywhere. Add purifying tablets, though.

I suggest adding a cane for personal defense: it would not harm.

These articles provide more information about events in Peru:

This was not difficult to predict.

I lived there for three years. I knew what would come if the Foro Do Sao Paulo kept forcing their pieces into South America. We were lucky to come back to our land before things went hairy. Within the lapse of a few months, the bread price (which had been stable since we left) went up, as well as diesel, gasoline, vehicular gas, and many staples. My friends who stayed there told me how I knew that was going to happen.

It was easy: I read history, and I know how the Communist minds work. They have a massive long-term plan; it is just that narrow vision, short-term thinking people can not see it. Those who saw it got into denial.

I know this is hard to assimilate, with as little information as there is. Castillo tried to dissolve the Congress to combat “corrupted practices”. That is not the way. The Vice-president did not give a coup: she is even on the same political wing.

Let´s keep moving to the circumstances and possible scenarios.

Lima is a city where most of the products coming in are 3-4 hours away, or even more. It is an arid place where the only river, the Rimac, is highly contaminated and not a healthy water source, albeit they use it. Using tap water for drinking is not a practice anyone recommends.

At the moment of writing this article, things are seemingly quiet because of the Christmas holidays. However, this article indicates that turmoil will start over soon once again.

The problem of the turmoil was not small. There is a death toll of 23 victims.

This is massive, especially in a country where people can legally carry firearms for personal protection, and receiving a shot from a gov-armed illegal gang (like was our case) could face a prompt armed answer. In Venezuela, those rights were violently removed de facto in 2012. Civilians cannot (legally) carry any weapons. This was, of course, for the mercenaries could crush any rebellion at gunpoint, as they did while the world watched silently.

The interesting fact is the high degree of organization, indicating that this was not a spontaneous action. It is guerrilla warfare. They are using angry citizens that, in their ignorance, do not know the exact role of Castillo and who he works for, and conning them into a situation that can resolve peacefully.

This could happen anywhere.

Exactly the sort of scenario that can erupt everywhere in the world, if you ask me.

I’ve seen it. We cannot accurately pinpoint this force moving those threads, but we know it´s there. Call it with the name that best suit you, but it´s there. How people react to every single event seems to be in the same line of obscure, shady objectives.  No matter the excuse. Coup de tat in Lima, China revolts against disease restrictions,  or demonstrations against nuclear plants in Germany. If we are out of our backyard for work or any other reason, we have to enjoy the ride, but be aware of what can happen in our surroundings.

I am used to traveling by land with some basic protection (work gloves, a bandanna for bandages, and such). However, this is a risk if some turmoil presents: those items are labeled as something used by potential “violent rebels” and/or “terrorists” (insert roll eyes here) according to this article and this article.

The world has to accept there is a whole takeover by a dark elite being attempted, and they are slowly opening the doors so the public can see what is expected from them in the next room.

Doped with the shine of fake gold, the amount of entertainment available, dumb videos, sports, and other distractions, the general public does not want to see the monster stalking into the darkness. It is too big and ugly. It cannot be real.

Bad news: it is VERY real. It will involve the entire world in a few more decades unless we decide to do something now to defend the West.

Do you believe the situation in Peru could happen elsewhere? Do you have any details you want to add? Are you prepared for a sudden outbreak of civil unrest? Let’s discuss it in the comments.