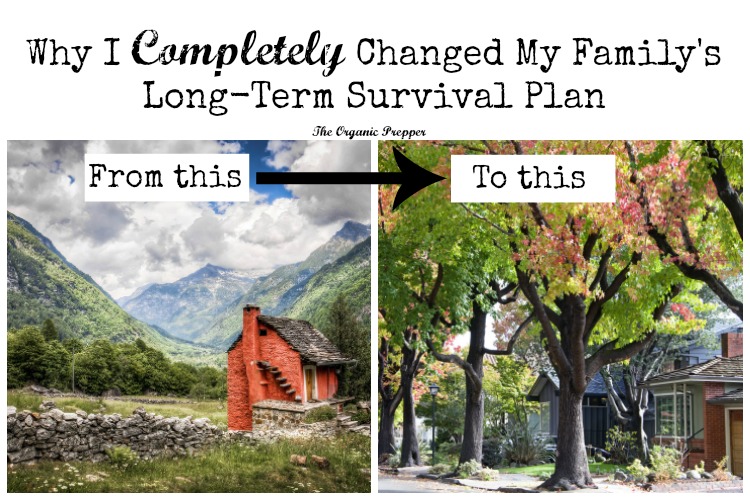 For five years, I lived the prepper’s dream. I lived on secluded acreage out in the boondocks, with a gate at the driveway to deter those who just wander past. I moved from the Canadian boondocks to the American boondocks (in foothills of the Sierra Nevada mountains of California) and lived the life that all the prepping books recommend.

I grew food, raised livestock, and had hardly any neighbors, and definitely none close enough to be up in my business. I learned more about self-reliance during those years than I ever realized I didn’t know.

I scrimped and saved to be able to move ever-further out into the woods. I loved finally being able to have a small farm. But, then, I came face to face with two people who had lived through the kind of epic, long term SHTF event that we all prepare for and they both told me, based on their personal experiences, I was doing it all wrong.

Here’s the reason I changed my long-term survival plan.

When  I first began working with Lisa Bedford, the Survival Mom, on our live webinar classroom Preppers University, my job was to teach people the things that I had spent years learning. But I never expected our guest instructors to have such a profound impact on my own long-term survival plan.

The first seed of doubt was planted by FerFAL (Fernando Aguirre), the author of The Modern Survival Manual: Surviving the Economic Collapse,  who taught a class sharing his experiences during the collapse of Argentina. He commented that the people who lived more remotely were nearly always victims of horrific crimes. Their little homestead nirvanas were pillaged by criminals. The women were raped. The men were slaughtered. As ideal as their situations sounded, by nature of their very solitude, it made them the perfect target for those without morals.

According to Fernando’s experience, unless you have a small army with you, round the clock sentries, and unlimited ammo, living in the country might not be all it’s cracked up to be.

As a single mom with a teenage daughter, that gave me pause. I knew that we didn’t have the firepower or the tactical skills to fight off hordes intent on pillaging our farm. And I also knew that we were so isolated that no one would be around to help if we needed it.

I began thinking about all of the fictional apocalyptic stories. People quickly formed communities because there is safety in numbers. Think about the prison and Alexandria in The Walking Dead. Think about the town of Jericho. Think about the novels of A. American or the books Alas, Babylon and One Second After. In a truly dire scenario, I’m talking about grid-down, all-out collapse, your community becomes the people who live within walking distance of you. And if no one lives within walking distance, well, then, you are truly on your own.

But the final decision to change my long-term survival plan was made when I got a chance to listen to Selco.

Like I said, I began to doubt the wisdom of my plan after Fernando’s class, but then came Selco’s class. Selco runs SHTFSchool, where he teaches about his survival experiences living in occupied Bosnia. He survived several years living the life that we all plan for but none of us are truly ready for.

He talked about the crime, the desperation, and the outright brutality.

He talked about how families and groups of friends lived together in one home for safety. It was the only way to survive.

During the Q&A session, I told him about our own situation. That I was a single mom with a teenaged daughter. That we lived 40 minutes from the nearest town with any place with a Wal-Mart or bigger grocery stores and that our nearest neighbors were half a mile away. That we raised our own food, had off-grid water, and a big gate.

And Selco told me, respectfully, that we would not survive in a situation that was like his.

He reiterated that extended families and groups of friends had to band together for survival. He explained how small communities arose inside the walls of their city and how neighbors had each other’s backs.

This was real life, not just some imagined scenario in which we all feel invincible.

And maybe my plan wasn’t so great after all.

When my daughter graduated early from high school and our former state threw up a bunch of roadblocks when she wanted to go to vocational school, we decided to expand our search. Then, she got accepted into a prestigious private vocational school in a smaller urban area across the country, and I knew the time had come to head back to neighborhood living.

There is nothing more enlightening than talking to people who have been there, done that.

No amount of theory that I could write could ever compare with the real-life experiences of these two men. And being able to ask them these questions was absolutely invaluable.

I didn’t start running these classes expecting to be the student, but it turns out, I was. I learned something that could save the life of my child and myself. I learned that I was making us both horribly vulnerable should the situation in our country go horribly wrong.

While living in town has its own set of variables and concerns, creating a community in your own neighborhood can be a much more realistic way to survive.

Stories from an SHTF Christmas: An Interview with Selco