A Venezuelan Collapse Survivor Warns You to be Mobile: “You May Have to Leave It All Behind”

I have mentioned in several opportunities what I could have done better, given the chance. Here some of my afterthoughts about it. As good as your plan may be, you may have to leave it all behind. You must plan to be mobile.

Some of these preparedness plans may not work as well as we would expect. No matter how wonderful your retreat is, there may come a time when you have to leave. And you must plan for that, too.

A walled retreat may not work in the long-term

Building a large fortress could seem a very attractive idea. Stocking and piling food and other goodies is, for sure, an even better idea. But, unless the kinds of event you are preparing for be something like a zombie attack, or a deadly, fast, pandemic…it is not going to work very good. Because you will find knocking at your door desperate people that, after the first weeks, will be desperate enough for trying whatever they could figure out to take over the compound.

And I say this because I saw it happen. I made one acquaintance, a nice fellow, judo practitioner, combat shooter (back in 2006-07 you could still buy a gun and ammunition for home defense and sport shooting), with a nice, large, wonderful cattle hacienda (larger than a farm indeed, about 1200 acres, maybe more). He was pro-guns, had studied in the States, and generally, his mindset was not that of the average Venezuelan regarding self-sufficiency. His house there was surrounded by a tall wall. Bullet holes all over the upper edge indicated how many times he had to shoot to warn trespassers.

Food in a large pantry and a small wind/solar arrangement to power some HAM / UHF equipment for the security team of the hacienda was as well in place. And of course, a small pool, and a large water tank with over 25.000 liters. There is a lot of rain there, so this was not exactly a concern. However, the huge drought in 2008 taught us a lot of lessons about this.

The judoka farmer, had this little problem: his cattle losses were so high (and this was way before Uncle Nicolas) that even before the collapse, he had to sell his land at a loss, his wonderful big house in the suburbia, leaving just a small flat in the city.

I know, he could just have shot the guys. But obviously, those who think like this have not the slightest idea about how things are there. Shooting someone, even if this person is obviously trespassing and with intentions to do harm, is seen as plain murder…even if you are defending your own life. The reasons? Easy. Authorities are so…deviated, so to speak, that unless you have enough financial means to pay some… “contributions”, the shooter won’t leave prison. Ever. The only shooters I have seen that are still in prison because of the right reasons are a couple of drug addicts (father and son) who shot dead a family father in the middle of a drunk fight for a parking space in front of a liquor store. Cold blood, in front of his small kids. They locked them up and threw the key. One of my friends was there.

He is now in some place in the States (or Italy, I truly don’t know), I lost his track, but I wish him the best. He is a nice, kind fellow.

He took care of his compound for many years, just to get ahead of many of us, and regardless, he had to migrate (or bugout?) before things got worse. He had to leave it all behind.

This is why I suggest an RV

Why do I suggest to prepare an RV, camper or some means of off-grid sheltering?

Fitting the RV with low consumption devices is now much easier. Good LEDs are available, warm and cozy, and investing in those wonderful Nickel Iron batteries seems to be a great deal to me. These are heavy, expensive, but they are low maintenance and will last for a lifetime. The consumables needed for keeping the batteries running, if I remember well, have a long life shelf under proper storage conditions, and that can be found in a shack built in the plot itself. This is something that, provided that you need more specific information I could write a much more technical article, so just ask for it, please.

Another interesting addition, especially for those who can weld, is a small, portable, welding machine and an air compressor. These are widely used by off-roaders when need to weld some chassis or some other part, and they don’t draw too much power. Air compressor will allow you to use a good variety of power tools, and they are much safer to use under the rain than electric tools. Those of us who have been in the open country to cut a fallen tree under the rain with a machete know what we talk about.

Solar panels? I will take two of those big ones, please. Hey, wait, make it three. Of course, a low tech filtering design for rainwater collection is a need. And I would add a high quality, compact, high capacity water filtering system. No pressure. Gravity will be enough. You can’t afford the risk of a leakage in the middle of nowhere, and losing your drinking water.

Being mobile would have made things easier.

This said, if we could have afforded the RV I had my eye on, we could have sold the city house, and bought some plot in a much larger city, as an investment for the future. Confiscation of an empty plot is much harder: people are lazy and wants an already built house. (wink). And this is the main reason for the need of an RV as the main home. It is much more practical and will provide shelter while building a stone and masonry main house.

By parking in my folks plot, our cats would have been able to feed themselves, too (a part of whatever money I can get around here is for them, twice monthly). Our expenses would have been much less, as well. The best part is that we could have been together, as a family. My friends could have known our children, and their small lads and ours could have been best friends in those years, so important for the good memories that will be a necessity later in life.

Put aside some money

Another necessity, now that we mention that, is going to be some financial resources, enough for renting a plot, perhaps even buying it later. With our main home sold, enough money in the bank would have been available, just in case. It would have been much less hard with that, and those 8 months we were separated as a family would not exist as a sad memory.

A good home, in our instance, is now a large investment standing still, unproductive and under the jeopardy of seizure. We are not living in it, and it is consuming money. We can’t sell it. This is what happens in a collapse.

A much wiser investment would have been the RV, a good condition one. With one-third of the money we could have arrived safely to our destiny, and so we would have some reserves, for some things like a dentist for the kid, some medicines I need, and other stuff.

This would have made migrating easier, too.

By traveling in an RV, we could have convinced to some local authorities that we are not the negative kind of migrants, but instead, the kind of those who are not dangerous, nor a burden or a heavy load to anyone. With it, you could rent a plot, buy a truckload of blocks, build (or contract some to do so) a good, tall wall, make a steel gate installed, and you will be set in a blink. A place to cook, shower, and rest, all of it within the reach of a poor migrant’s pocket.

After that, you will have time to look for a decent way to make some cash. As I write this, renting prices are increasing in this part of the city, because of the huge amount of new migrants arriving. Flat owners deny the properties to some people that get 6 persons in an apartment designed for 2 or 3 at the most (although some of them are smart, and get coordinated with people who works at night shifts). I have heard about 10 persons living in a 2 bedroom apartment.

I am thinking seriously in exchanging my busted SUV for an RV in Venezuela, and coming back, but it seems there is not even one able to resist such travel. Perhaps I could sell it in cash and make it sent here.  If we can make that deal and buy an RV here, I will let you know. It would be a great advance on our lifestyle, indeed. I would need the migration paperwork for driving, but it would not be too much of a problem. I would love to find some of the truck camper varieties, the kind you can detach off the truck platform and install on their own legs, and use the truck. Fitting the truck with an air suspension to increase lift, the truck would be a normal ride in the city and an off-road setup just in case. It would have been useful for me a couple of times in Venezuela, in some roadblocks generated by accidents or other causes.

I hope you find usefulness in our ideas (I usually ask my wife what we could have done in retrospective), and I truly hope you never have to use it.

Thanks for your comments, and your donations to keep this flowing.

You are a wonderful, and supportive community. I will see you soon again. 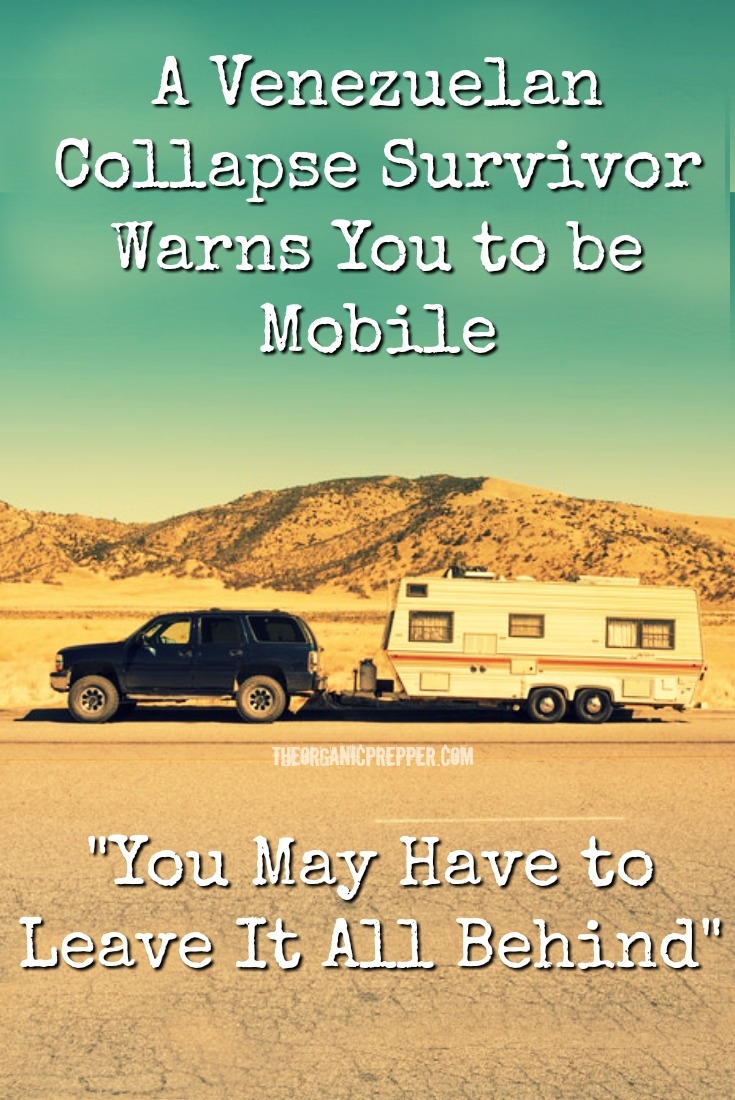 Don’t Let Supply Chain Shortages Stop You from Getting Prepped!