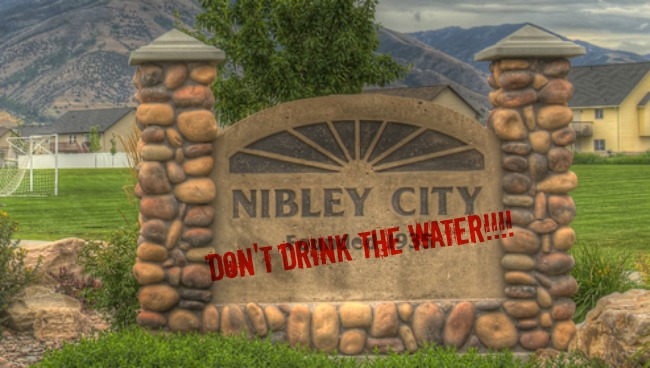 In the past couple of years, it seems that one American city after another has faced a water disaster when municipal supplies have become tainted. West Virginia and Ohio both faced water emergencies in 2014.

Now, the city of Nibley, Utah has issued an order to residents not to use the water from their taps due to a foul odor caused by contamination.

Nibley City today issued an order directing its residents, businesses and other users of its culinary water system to not use water from the system until further notice.

Residents contacted the city reporting a foul odor in the water. City public works crews, in cooperation with other agencies, investigated and took samples from the water system for testing.
Officials believe they have identified the source of the contamination. Evidence collected so far suggests the system may have been contaminated by a recent diesel fuel spill near the city’s spring. However, the investigation is ongoing. The contamination appears to have only affected one of the city’s three water sources, which is the spring. The city’s other two sources, which are deep water wells, do not appear to have been affected, and steps have been taken to protect them.
The spring has been isolated from the rest of the system and the system is being flushed. Once the system has been flushed, new water samples will be taken. Residents will be notified after water tests confirm contaminants have been cleared from the system. Residents should avoid using the water for drinking, cooking, washing, bathing or watering animals until that time. Flushing toilets is permissible and residents do not need to turn off their water service to their house.
Neighboring cities have set up watering stations where residents can obtain water until water service is restored. A list of the watering station locations, along with other updates, can be found at www.nibleycity.com. Logan City has also made showers at its Recreation Center at Logan High School available to Nibley residents. (Source)

At this time, the city does not have a prediction on when the water will be safe to use again.

Nibley is a small town of just over 5,000 people.  There’s none of the desperate, stampeding drama that you see in larger cities, with shelves being cleared of all bottled liquids. However, as calmly as people are behaving, the local stores have still sold out of water. Residents wishing to procure bottled water must drive to nearby towns to purchase it.

Are you prepared for a water emergency?

Imagine this happening in your area. For how long could you sustain your family with the water that you have on hand or could procure on your own property?

Many people worry about the unstable electrical grid, and the effects that this would have on life as we know it.  However, what will cause death and illness even faster is a threat to the water supply. If you do not have a well, a nearby spring or fresh water source, and ways to purify the water you acquire, you could be in big trouble – life-threatening trouble – in a matter of days.

Join me on Wednesday, April 29, as I talk with Glenn Meder, a water expert, about creating your own customized water emergency plan. The webinar, called “Understanding Red Cross Recommendations for Treating Water in an Emergency” is absolutely free and loaded with good information.  You can follow this link to register for the FREE seminar.

We’ll talk about storing water, acquiring water, and purifying water in the most valuable hour you’ll spend on the internet all week.

Our municipal water supply is a threat even without the chemical spills. 18 unregulated chemicals have been found in supplies across the country, and deliberately added chemicals can cause serious long-term health concerns.

If you don’t have at least a one-month supply of fresh pure drinking water properly stored, along with plans for long-term water sources, the fact that this is the THIRD TIME IN A YEAR that water supplies have become tainted be your wake-up call.  An epic disaster doesn’t have to be a dramatic, end-of-the-world scenario.  This should serve as a cautionary tale to those who are blithely unprepared.

If you don’t want to be at the tender mercies of FEMA and the government for your survival, get prepared. A full month’s supply of drinking water for a family of 4 is approximately $150, give or take a little, depending on the prices in your area. As well, fill empty containers with tap water that can be safely used for pets, for flushing, and for cleaning and hygiene purposes. This is a small investment to make for your family’s security and well-being in the event of an emergency. You don’t want to be one of the people standing in line for whatever the government chooses to dole out to you.

Declare your independence by getting prepared for a water emergency. If you never buy a single canned good or bag of pasta for long term food storage, please store water. You don’t have to be a conspiracy theorist to see the good sense in being prepared for an event that could happen any place, at any time.