Where to Get Seeds When Online Sources are SOLD OUT 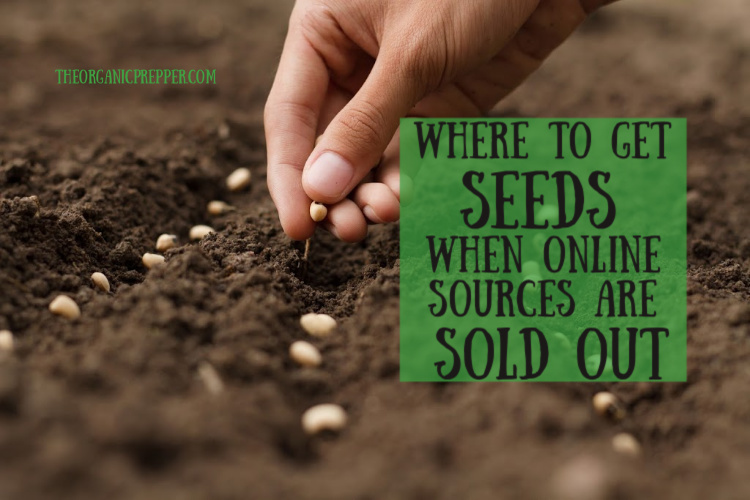 With the current shift in the economy, and with supply lines being interrupted all around the nation, there has been a massive – massive! – spike in the number of people interested in growing a garden this spring.

Hundreds of thousands – possibly millions – of new gardens are springing up across the country. Some are large, some are small, and all are important. Some people are calling them Victory Gardens, others are calling them crisis gardens. Even those living in high-rise apartments are planting “Victory Sills,” pots or glasses of water on their windowsills in which herbs or sprouting vegetables are rooting. Whatever the name, cumulatively, they’ll be an important source of fresh produce.

Normally the renaissance in gardening of all sorts would be nothing but good news. However, the surge of interest from both novice and experienced gardeners is stretching seed companies to the limit.  Many companies have stopped answering the phones and are putting up online pleas for understanding as they try to handle backorders with limited capacity and inventory.

Here are some other places to get seeds.

If you find yourself unable to order seeds online, here are some alternate sources to consider:

It goes without saying these alternate sources may not provide you with exactly the varieties you were looking for, but now is not the time for tunnel vision.

Nor can you be too purist about planting only non-hybrid or heirloom varieties. Most (though not all) commercial seed packets you find in box stores will be hybrids. Right now, this doesn’t matter. Buy what seeds you can. Also, while sometimes seeds from hybrid plants are sterile, many times they’ll grow; they just won’t produce the same kind of plant as its parent plant. But in emergency times, the important thing is to grow food, so plant your hybrid seeds and see what happens. You can scout around for non-hybrid seeds later.

If you have the room and the seeds, don’t hesitate to plant something that’s not your favorite food; you might be surprised how many others are willing to take the resulting fresh produce off your hands (and perhaps swap you for something you DO like).

It’s time for everyone to tap into their Inner Gardener and “sow the seeds of victory,” to use the old slogan. Now get those seeds in the ground and see what happens.

Patrice Lewis is pleased to announce the availability of the complete collection of 52 Country Living Series ebooklets, representing over 17 years of homesteading experience. Subjects include preparedness, gardening, frugality, rural skills, food preservation, and more. Click this link for details.