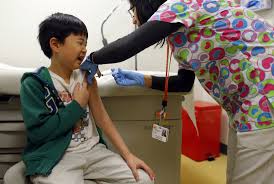 Michael Bloomberg may be nearly finished with his term as the mayor of New York City, but he is pushing his “health” mandates until the very last minute.  When he isn’t busy peddling gun control, he’s threatening parents with the choice of injecting their kids with poison or the loss of childcare options.

Bloomberg’s dystopic Board of Health is voting on Wednesday to establish new laws that force parents of children as young as 6 months of age to have the flu vaccine.  If children are not vaccinated against the flu by December 31 of each year, they won’t be allowed to attend schools or licensed daycare facilities.

“Young children have a high risk of developing severe complications from influenza. One-third of children under five in New York City do not receive an annual influenza vaccination, even though the vaccine safely and effectively protects them against influenza illness,” the Health Department said in a statement. “This mandate will help protect the health of young children, while reducing the spread of influenza in New York City.”

The Board is stocked with mayoral appointees and controversial initiatives–from smoking bans to regulations on soda cup sizes–have sailed through with little opposition. (source)

Although the mandate is expected to pass, a small but vocal group of activists intend to protest until the very last second. John Gilmore, the executive director of the Autism Action Network, is helping to organize tomorrow’s protest.

“The Bloomberg administration is wildly exaggerating the benefit of the flu shot and we think they are wildly underestimating the risks involved with it.

“There are risks associated with every medical procedure,” he said, citing allergic reactions, toxic mercury used as a preservative and questions as to whether the Board’s move is legal given state government jurisdictions.

And though he doesn’t expect the Board’s vote to go his way, he hopes the rally will get Mayor-elect Bill de Blasio’s attention, potentially opening the door for a reversal once he takes office in January.

“This is basically to put the mayor-elect [on alert], make him aware that this is an issue that he’s going to have to deal with it. It’s not going to go away,” said Mr. Gilmore said, criticizing the way the Bloomberg administration has pushed the rules through. “He is kind of doing this in a stealth fashion. He just proposed this about 6 weeks ago. I don’t think there was any announcement.”  (source)

You can learn more about the protest against this mandate HERE.

The rule, if passed, will mean that any child without a doctor’s note or religious dispensation will be forced to be injected, or will not be able to attend school.  In this time of economic hardship, parents can’t afford to lose their daycare and miss work, so they are forced to comply to this blackmail, whether they believe this is the best choice for their child or not.  Their very livelihood is being held hostage by Bloomberg and his Board of Health.

Flu shots mean big money to the pharmacies, to the doctors, and to the drug companies.  The frenzy with which the flu shot is promoted is directly proportionate to the profit margin, but those lining their pockets fail to mention that you could be paying them to give you and your family a lethal injection.

What the propagandists and flu shot proponents fail to mention are the horror stories – like the fact that 23 senior citizens (in that touted high-risk-must-get-a-shot group) just DIED from the same flu shots that are given at local pharmacies, with no accountability, no prescription necessary, and no check up from the doctor.

Package inserts for flu vaccines show a multitude of side effects, including death, and yet they are marketed the same as over-the-counter drugs with no prescription needed.

Because in the United States vaccines enjoy complete immunity from lawsuits in the market place. If you are injured or die from a vaccine, you or your family cannot sue the manufacturer of the vaccine. This law enacted by Congress, was upheld by the U.S. Supreme Court in 2011.

Therefore, they are marketed with the same marketing techniques as any other high-profit product. With the baby boomer generation moving into their senior years, today’s seniors are seen as an especially lucrative market. (source)

There are better ways to avoid the flu than risking your life with untested ingredients.  Learn about 25 natural alternatives to the flu shot HERE.

Bloomberg’s tenure as mayor can’t end soon enough.  Hopefully his predecessor will overturn the numerous “health” mandates made by the billionaire politician, but it won’t be in time to help the parents who have already grudging complied to have their children vaccinated at the risk losing childcare services.