Almost 9000 Retail Stores Will Close This Year: Here’s the List of Businesses in Trouble 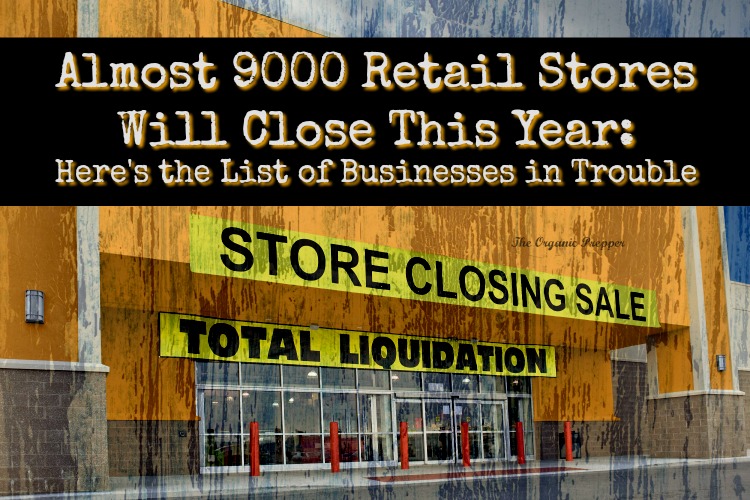 Back in January, after the worst Christmas sales in a decade, I predicted that 2017 would be the year of the Retailpocalypse and that we’d see hundreds of retail stores closing.

Sadly, I was wrong.

According to a CNN Money report, more than 300 retailers have filed for bankruptcy already and we’re only halfway through the year.

Another report by Credit Suisse has an even gloomier prediction:

…around 8,640 stores in the U.S. will close by the end of 2017 — easily surpassing the number of stores closed in a year over the past two decades. (source)

When retail stores close, it affects everyone.

Even if you’re not much of a consumer, when retail stores close, it can still affect you.

Retail stores can be a glimpse at how our economy, in general, is faring.

Underserved communities have a lot of problems that are all rooted in the loss of their retail stores.

Often, people begin moving out of smaller towns that are bereft of retailers because it’s so inconvenient to purchase the things they want or need. Others leave because they lost their job and there were no other jobs available. Property values decline.

Mom and Pop stores that existed before the chain retailers arrived were often driven out of business. Fewer options mean higher prices at any stores still remaining.

As Michael Snyder of The Economic Collapse Blog wrote:

At this moment, the number of working age Americans that do not have a job is hovering near a record high.  So being able to at least get a job in the retail industry has been a real lifeline for many Americans, and now that lifeline may be in grave danger.

For those running our big corporations, losing these kinds of jobs is not a big deal.  In fact, many corporate executives would be quite happy to replace all of their U.S. employees with technology or with foreign workers.

These stores could be filing for bankruptcy or closing their doors this year.

Some experts predict that one in four malls will be closed within the next five years.

The retail apocalypse is real.

That translates to 220 to 275 of the nation’s 1,100 shopping malls, the research note said, according to Fortune.

Fueled by the rise of e-commerce, mass store closings and bankruptcies, brick and mortar retail stores have been closing around the U.S. at an increasing rate. And the fight against e-commerce giants like Amazon will only get worse. (source)

According to a Moody’s Investor Service report, the outlook is extremely grim for the following retailers, who have been downgraded to the lowest ranking on their credit spectrum. All of these brands/retailers are now classed by Moody’s as “subject to very high credit risk.”

This is on top of stores that were in trouble or whose projections were down back in January:

Here are some steps you can take to protect yourself in a crumbling economy.

I really don’t believe that all of this can be blamed on Amazon. We’ve become a country of consumers instead of a country of producers. We work to pay for things that profit huge corporations who have their goods produced for pennies in other countries instead of working to produce these things ourselves.

The problem with our economy is that we've become a country of consumers instead of a country of producers.Click To Tweet

That, in my opinion, is the problem in a nutshell.

The most important prep you can make when the future is questionable is to learn to become a producer. Learn to meet your own needs by growing food, providing a necessary service, or creating something that people will always need.