10 Hurricane Harvey Stories That Will Give You Hope for America 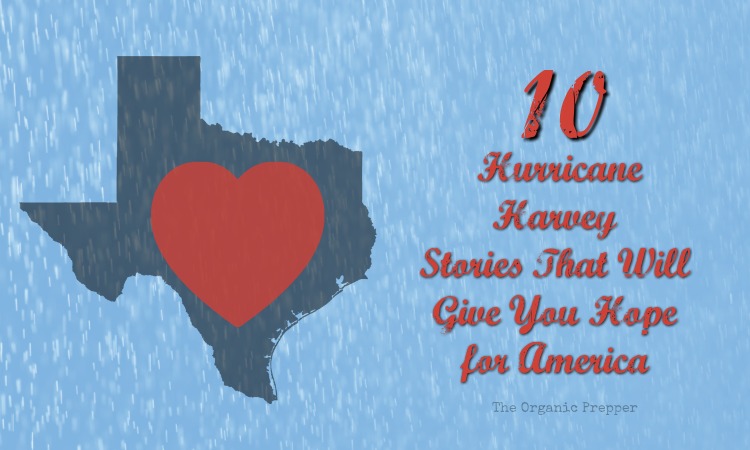 While it’s true there are a lot of stories about division and heartlessness, there are many stories coming out of storm-torn Texas that will give you hope for humanity again. Kindness and love for our neighbors isn’t dead, despite a politically divided country. This is proof that we can work together and give selflessly. And if we’re prepared, then we are in a better position to help those around us.

This isn’t to underplay the death and destruction, but to highlight our humanity in the face of disaster.

Below, you can find 10 of my favorite heart-warming stories so far.

4.  Some employees who were stranded at a bakery by the flood made bread for hungry survivors. The bakers were stuck at the bakery for two days, but instead of being idle, they worked all night long to make hundreds of loaves of pan dulce bread to help nourish fellow flood victims. (source)

5. Bass Pro provided 80 boats for search and rescue efforts. When Houston officials ran out of boats, they asked for volunteers with boats to come and help out. Bass Pro answered the call with the use of 80 of their boats and $40,000 in emergency supplies. (source)

6. Two furniture stores turned their locations into pet-friendly shelters. Mattress Mac welcomed displaced residents, their children, and their pets into their stores to provide them with a comfortable place to stay. (source)

7. A storm chaser rescued a lost dog. A storm chaser stopping for gas on his way home was surprised when a bedraggled dog hopped into his Jeep. After he posted a photo on social media, he was able to connect with the dog’s owner and return him. (source)

8. A reporter and camera crew in a boat rescued a stranded family shouting for help. As the crew went past a home, they heard people calling for a help. The family’s home was being flooded with waist-high water. Their elderly mother suffered from Alzheimer’s. They were helped onto the boat and taken to shelter. (source)

9. Not one to let a disaster get him down, this man caught a fish in his living room. Watch these three videos.

We're sending more than 155,000 cans of emergency drinking water to those affected by #HurricaneHarvey. Stay safe everyone. pic.twitter.com/Wc1YzQQA9M

These stories go to show you that we can all look past race, politics, and religious disagreements to help our neighbors, keep our spirits up, and perform acts of kindness. Wouldn’t it be nice if we could continue acting like neighbors after the disaster has passed?

Share links to the most heartwarming stories you’ve heard in the comments section below.