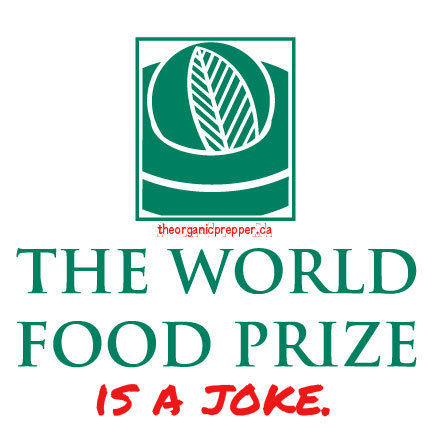 Monsanto and Sygenta have won the prestigious World Food Prize.

Apparently, tampering with the genetic make-up of food and turning something that used to be healthy into poison, tainting the soil, air and water with chemical drift from pesticides like Roundup, killing the bee population of entire continents, and driving small farmers out of business through gratuitous lawsuits and unethical practices, pays big public relations dividends.  The World Food Prize is said to be the equivalent of the Nobel Prize for agriculture.

Keep in mind we live in a world where President Barack ‘Drone-the-Children’ Obama won the Nobel Peace Prize and where Hillary Clinton, the woman behind the lack of response during the Benghazi massacre, won the American Patriot Award for her “defense of the nation.”

Lest you ask, no this article is not satire, even though the premise is so astoundingly ridiculous that it belies all reason.

On Wednesday, the winners of the World Food Prize were announced at the US State Department, with Secretary of State John Kerry in attendance. This year’s award will be shared among three scientists: Marc Van Montagu, Mary-Dell Chilton and Robert Fraley, all pioneers in agricultural biotechnology.

Fraley is currently the chief technology officer at biotech giant Monsanto, while Mary-Dell Chilton is the founder of Syngenta Biotechnology, another prominent biotech company. In awarding the prize, which comes along with a $250,000 cash award, the Iowa-based World Food Prize Foundation reasons that genetically modified crops offer higher yields, and are more resilient to pestilence and adverse weather.

Despite congressional pats on the head and a revolving door between government agencies and biotech corner offices, people are beginning to wake up to the bigger picture.  Recently, activists were able to persuade their senators not to renew the Monsanto Protection Act, an enormous victory that proved our voices can be heard.

Despite the hoped-for public relations boon, this ludicrous “honor” will probably do little to un-ring the bell that social media has been diligently chiming with huge global protests like the March Against Monsanto. In fact, it is most likely to backfire because of the blatant hypocrisy of such an award.

Spread the word: any award given for poisoning vast numbers of people and destroying the environment was merely up for sale and is no indicator of positive achievement.