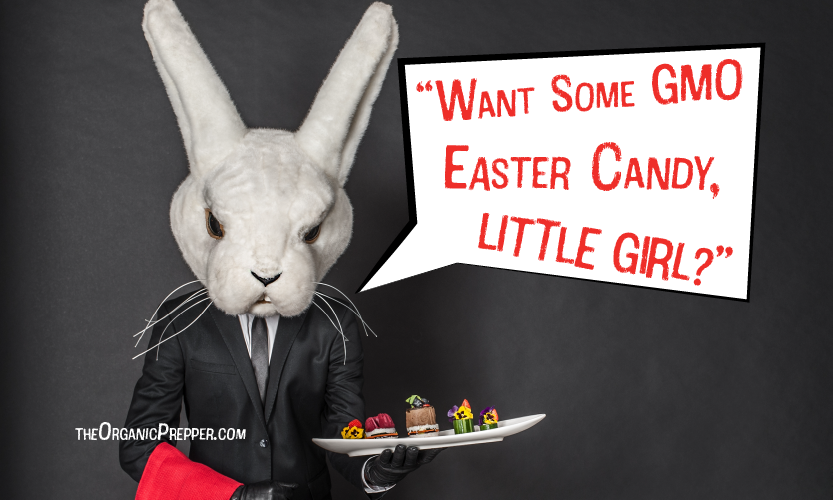 I’ve always thought those giant Easter bunnies that walk around the mall were sort of creepy. I remember once when my oldest daughter was a toddler her absolute terror when one such mascot bent over her stroller and asked, “Want some candy, little girl?”

Well, it seems that her instincts were right. Now that I know what’s in the “treats” that they push, I’m positive that taking candy from strange rabbits is a terrible idea.

Today, I’m here to “ruin” Easter for you by telling you exactly what’s in that adorable little basket that pretty much everyone in America gives to their kids. Because, you know, nothing says “Happy Easter” like a beautifully decorated basket full of prettily packaged GMO high fructose corn syrup, dye, processed GMO sugar, and chemical flavoring. (Don’t worry, though. I’ll also “save” Easter with some non-toxic treat suggestions

The contents of the average American Easter basket are so genetically modified, it’s a wonder the Easter Bunny hasn’t sprouted an extra ear and a couple of tumors. While they look absolutely adorable, with their marshmallow peeps, chocolate rabbits, mini-eggs, and colorful jelly beans, the ingredients are mostly synthetic, highly processed, and very high on the GMO scale.  Here’s a closer look at what is lurking within those cute little candies.

Without any further ado, let’s take a closer look at what is lurking within those cute little candies.

Jelly beans used to be my favorite candy. That is, until I learned about how nasty the ingredients are. Don’t be fooled by label that tout “natural” ingredients. Just because it’s derived from nature doesn’t mean it isn’t gross to eat.

Here, let me ruin jelly beans for you, too.

Sugar:  Frequently (and by frequently I mean more than 95% of the time) made from GMO sugar beets and is horrifically processed.  (Learn more about processed sugar).

Corn syrup and corn starch: At least 85% of the corn grown in America is GMO (learn more about corn.)

Carnauba wax: It has not been proven toxic by the FDA (snort) but it is also found in shoe polish, automobile wax, and surfboard wax…so if you want to eat “food” that has been shined up like your car or your kitchen floor you should head straight for the jelly beans.

Shellac: A picture is worth a thousand words.  Shellac is made from the mating secretions of the female lac beetle.  That sure gives a whole new meaning to “beetle juice”, doesn’t it?

I like bunnies and chocolate as much as anyone else, and melding the two into a cute piece of delicious candy was simply brilliant from a marketing perspective.  The trouble is, standard American chocolate is just garbage.  Before we even get into the ingredients in a chocolate bunny, let’s talk for a moment about the chocolate itself.

You know how experts tell you that you should eat some chocolate each day, that it’s actually good for you? Well, they do NOT mean the icky “milk chocolate” sold at every gas station checkout counter in the country.  And “white” chocolate?  Forget it – that’s not even chocolate.

Here is the nifty thing about the cheapo chocolate sold across the country. It has a secret ingredient – one so secret it isn’t even on the label.

I am not making this stuff up. I couldn’t.  They’d sue me.

Those wonderful guardians at the FDA have actually ruled that as long as your chocolate bar contains less than 60 – SIXTY – cockroach parts, it’s perfectly fine to eat.  But don’t worry – the average chocolate bar only contains 8 cockroach parts.  You can read more of the FDA’s ruling, delightfully entitled Chocolate & Chocolate Liquor – Adulteration with Insect and Rodent Filth.

Let me just reinforce that statement.

If a chocolate bar contains less than 60 cockroach parts, the FDA says that is just fine.

Anyhow, back to chocolate bunnies. If you aren’t deterred by the roach parts, perhaps the other ingredients will slow you down a little.

What I found interesting was that when I compared a cheapo chocolate bunny with it’s more expensive counterpart, a Godiva chocolate bunny, the ingredients had very little difference. Check out the Battle of the Bunnies.

Here’s the breakdown: GMOs, with the soy (90% of American soy is GMO) and the sugar.  We have some milk that most like contains rBGH (growth hormone) and antibiotics. No mention of cockroaches.

GMO Soy:  90% of American soy is GMO.  We have some milk that most like contains rBGH (growth hormone) and antibiotics. No mention of cockroaches.

Cockroach parts: Not on the label.  But ewwww.

What self-respecting Easter basket would omit the marshmallow chicks? Maybe one that wasn’t prettily disguised toxic crap?The ingredients list below is for the yellow chicks – other color chicks have

The ingredients list below is for the yellow chicks – other color chicks have other food coloring.

Yellow #5 (also known as Tartrazine): According to Very Well Health, is bad news. “Tartrazine has long been suspected of being the cause of many adverse reactions, though not all have been supported by research. Some suspected reactions include: asthma symptoms, Angioedema (swelling of the lips, tongue, throat, and neck caused by the release of histamine in an allergic reaction), Urticaria (hives), and Atopic dermatitis (skin rashes)… There has also been a theory that people with aspirin-sensitive asthma may be especially sensitive to tartrazine.”

Potassium sorbate:  This additive is used to prevent spoilage from mold and bacteria. It has been linked to adverse effects such as hypersensitivity reactions, migraines, and hyperkalemia (excess potassium in the bloodstream).  (source)

Artificial Flavors:  This is so vague a term, we can’t break down the potential health effects of whatever they may have mixed in with the chicks.

Mini-Eggs: All of the Above, Plus Ethanol

Who doesn’t just love those mini-eggs with the crispy sweet shell and the chocolate inside?  The pretty pastel colors make them a traditional goodie for little ones to seek during a hunt on Easter morning. But those innocuous looking little candies are possibly the worst of an already terrible Easter basket line-up.

Artificial and natural flavors: Anytime they’re vague like this, you should be suspicious.  First of all, just because it says “natural” doesn’t mean you want to eat it – remember the beetle mating fluid?

Artificial colors:  Lots of ’em.  Which makes mini-eggs purty. Mostly banned in Europe, cause those kids are wimpy.

Lactose: Just another word for hormone-laden, antibiotic-filled milk.  Remember the growth hormones above?

Polyglycerol Polyricinoleate (PGPR):  The presence of PGPR signifies you are getting lousy quality chocolate.  Foodfacts.com says “Polyglycerol Polyricinoleate (PGPR) is an artificially derived emulsifier that is mainly used to replace some of the cocoa butter in chocolate used in lower grade candy bars. PGPR is a yellowish, viscous liquid comprised of polyglycerol esters of polycondensed fatty acids from castor oil. ”

You can build a better Easter basket and still give your kids treats.  You don’t have to actually ruin Easter. I was just kidding about that.

The value of plastic eggs for candy containers cannot be overstated. (I know – BPA – but the food will only be in the eggs for a few hours with no extremes in temperature.)  I have discovered I can put nearly any kind of food in a plastic egg and my kids are excited about it.  And they’re teenagers. Just think how psyched little kids will be!

Here’s a picture of last year’s basket.  I used buckets that the girls can use for other things once the candy is gone.  Keep in mind that this was for an 18-year-old. You can easily frou-frou it up for a younger child.

You can get most of these goodies at Target or Whole Foods. For the sake of ease, I’ve also included links to Amazon so you can order them online in time for Easter if you don’t have time to run all over the place looking for less horrific Easter goodies.  Most of these are multipacks which helps when you have multikids.

The strawberry tastes similar to Twizzlers, but apparently the other flavors are also yummy.

Great way to fill up some of those plastic eggs.

: These look adorable in the basket.

These are really expensive, but I figure it won’t kill me once a year

: The milk chocolate  version is the most similar to the classic Reese’

What do you put in your kids’ baskets?