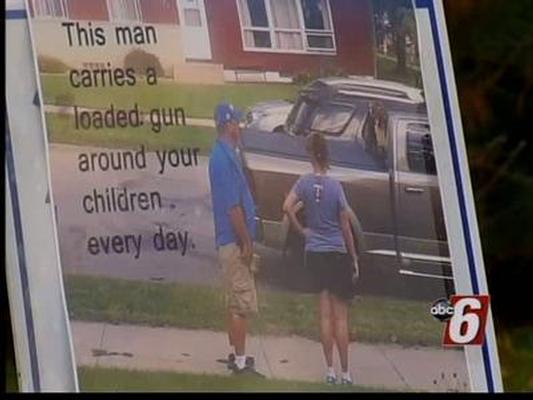 A woman in Rochester, Minnesota recently exercised her Constitutional right to be a jerk.

Kimberly Edson photographed a man who exercised his own Constitutional right – the right to bear arms.  She placed the photo on a poster in her front yard, “warning” the other parents: “This man carries a loaded gun around your children every day.”

The “scary gunman” in question is Matthew Halleck, a father of two and a legal concealed carry permit holder.  He drives his daughters to school, abides by the rules of not going on the property with his firearm, and watches them go across the street.

“Since we don’t have a way to stop him, we felt it was important to notify the neighborhood and the parents that there is an armed man in their presence,” said Kimberly Edson, a Rochester resident who put the sign up. “The first couple days of school he had it very visible, we saw it and were quite concerned,” she said.

Kimberly called the police the day the picture was taken, but they said Matthew has a legal right to carry off school property. Matthew also contacted authorities concerning the sign, and while they briefly took the sign down, it was eventually determined that Kimberly was also breaking no laws. “He has a 2nd Amendment right to carry the gun, I have my 1st Amendment right to say that I don’t like it,” said Edson. (source)

This goes back to the culture of fear that has been deliberately created in America. The pawns in this game are our children:

The fear is quite literally being implanted. When police refuse to tell people what is going on, when kids are rapidly evacuated, when cops in military-style SWAT gear swoop in – all of these dramatic scenes are not soon forgotten.  When the dreaded “gun sighting” occurs in the future, the natural human response is to flash back to the last time that it happened.  Instantly, the emotional response is overwhelming fear. (source)

Predictably, Edson’s  argument is, of course, the cliched “what about the children?”  She fails to mention that if the children happen to catch a glimpse of a firearm and are terrified by it, it’s because some ninny told them that guns are scary.  Speaking of ninnies:

“I have a responsibility to help create the kind of community I want to see, and I don’t want to see a community where there are guns around schools,” said Edson. (source)

If there was a situation that boiled down to the actual physical safety of your child, would you prefer that it be responded to by a dad with a gun or by a hysterical mom who is terrified of the very sight of a gun?  I know which one I’d choose, and it certainly isn’t the hand-wringing Ms. Edson.