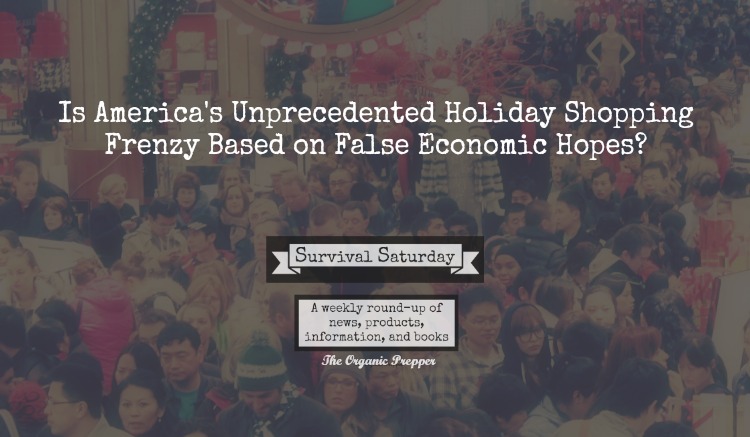 This week on Survival Saturday, we’ll discuss the holiday economy. While spending is up significantly, is this based on false economic hope? Has a financial crisis been diverted with the election of Trump, or is he merely the scapegoat for when the dominoes fall? In my opinion, it’s more important than ever to set a budget, get out of debt, and shift to a frugal lifestyle as quickly as possible.

Last week, I was concerned that the election might make for some tense Thanksgiving dinners and even some empty chairs at the family table. Many families are at war regarding the political choices that family members and friends have made. I sincerely hope I was wrong and that you all had a peaceful Thanksgiving. If you didn’t then maybe it is time to reach for the phone and call those people that were missing from your table on Thursday.

The figureheads in Washington aren’t worth falling out with your loved ones because, in the end, your life isn’t made up of politicians. It’s made up of real, in-person relationships. Christmas is right around the corner – take the steps necessary to fill those empty seats.

If you live in Bloomington, Indiana, your life just got a whole lot more politically correct.

Mayor John Hamilton has removed “Good Friday” and “Columbus Day” and changed them respectively to “Spring Holiday” and “Fall Holiday.”

Hamilton said in a statement:

“We are terrifically proud of our diverse workforce at the city. That diversity makes us stronger and more representative of the public we proudly serve. These updated names for two days of well-merited time off is another way we can demonstrate our commitment to inclusivity.”

His desire to “better reflect cultural sensitivity in the workplace” has made local people wonder what will be renamed next in this 1984-style Orwellian society that Hamilton seems to be trying to create.

Black Friday 2016: More People Spent Money They Don’t Have on Things They Don’t Need Than Ever Before

Black Friday. The day Americans lay siege to stores and rip goods from the hands of their fellow human, right after spending the previous day expressing their gratitude for everything they have. Here’s this year’s Video Hall of Shame. As a prepper, you’ve got to be looking at this like I am – these people are the reason we need to be well-armed.

That’s not the only issue I have with the Black Friday Holiday Season Opener. Quite a few of these people are spending money they probably don’t have. Nearly all of us have felt the pinch as paychecks stagnate while expenses continue to go up. Life in America is completely unaffordable, with many people working more than one job to make ends “sort of” meet. And still, they went out to spend record amounts of money this year. Literally, more than ever before. Some are crediting this uptick to a renewed faith in the economy due to Trump’s presidential victory.

The National Retail Foundation expects sales to be up 3.6% this year. The average spending increase from year to year is 2.5%. While I’d like to say this is fantastic for the economy, it appears most of that spending is with large corporations and big box stores to buy imported goods from minimum wage employees.

Spending is out of control, and people will be feeling a spending hangover in January when the bills come in. If you want to step off the consumer bandwagon and dial back your spending, check out my new book, Have Yourself a Thrifty Little Christmas and a Debt-Free New Year. I’m offering it for only $5 this weekend so you can get the holidays off to a good start. Our goal as a family is to spend less than $100 in total on gifts, food, and decor while still having a wonderful time. I invite you to join us in dialing back the spending frenzy.

The US Economy Isn’t Out of the Woods Yet

While I’d like to be hopeful about the reigns of the economy in the hands of Donald Trump, I have concerns.

Did you guys happen to read the presidential predictions of Brandon Smith from Alt-Market?  Back in August, Smith predicted a Trump win, even though all the fake polls and MSM sources were outwardly confident that Clinton had it in the bag.

Everyone congratulated Smith for his accurate prediction but lot of folks totally overlooked the other part of the prediction: that an economic collapse would occur and be blamed on Trump and a Republican majority in the Congress. A crash like this would force a global central bank, and our financial futures would no longer be in the hands of American leadership and policies. He also predicted this: “A Trump presidency will most likely be met with accelerated violence from social justice activists and general riots from the entitlement class.”

Then, in the aftermath of the election, Smith wrote this excellent assessment. (You need to read it if you haven’t and to keep in mind the accuracy of his predictions thus far.) Here’s a quote that is undeniably accurate:

The reality is, half of America is ALREADY primed to blame Trump for everything that happens over the next four years (if we even make it that long).  Possession is nine-tenths of the law in the minds of many.  Beyond that, every meme in the global media and on the left is promoting the idea that Trump is an apocalypse in the making.  Even Germany’s ‘Der Spiegal’ published its after-election magazine with a cover depicting Trump’s head as a giant comet hurtling towards the Earth.  Don’t tell me that Trump cannot be blamed for an economic crisis.  Only a complete idiot would suggest that he is anything other than the perfect scapegoat.

I believe he’s absolutely right and that difficult times are coming. It’s time to prep for an economic collapse the likes of which most people have never imagined. We could be looking at a situation like that of Argentina or Venezuela. When it occurs, it won’t matter who is in office. All that will matter is whether or not you’re ready to live a Depression Era lifestyle. Based on this assumption, the prepping information on this site will begin to change focus and concentrate on the frugal tips you need to survive a personal financial crisis.

Looking for some good preparedness deals this weekend? Here’s what we’ve got…

Have Yourself a Thrifty Little Christmas $5

My youngest daughter and I have written an ebook together. If you’re wondering how to manage to pay for all of the holiday gifts, festivities, and decorations this year, we have the answers for you. Opt out of the holiday insanity and make simplicity your new mode of celebration.This little book has more than a hundred tips for decorating, family traditions, gift-giving, charity, and some of our favorite family recipes for delicious, festive, yet budget-friendly food. We’re selling it this weekend for only $5! Go HERE to learn more.

Whether you’re looking for healthy emergency food without the GMOs, reliable water filtration devices, or a stash of hormone-free powdered milk, Preppers Market has it all. That stuff is heavy and the average cost of shipping, per bucket, is $20. As our Black Friday bonus to you, we’re paying for the shipping, so now is the time to buy in quantity. (And based on the information above, you really, REALLY need to get stocked up.) Use the code FREESHIP at checkout. Go HERE to shop – and don’t forget to use the code FREESHIP!

What do you think of Brandon Smith’s predictions of a Trump Era economic disaster? Did you venture out on Black Friday? What are your plans for the Christmas season ahead? Do you have any news links you want to share? Now’s the time! You are absolutely welcome to post your links in the comments below. Please join the discussion!