World Events: Next Verse, Same as the First, Different Accent, Which is Worse? 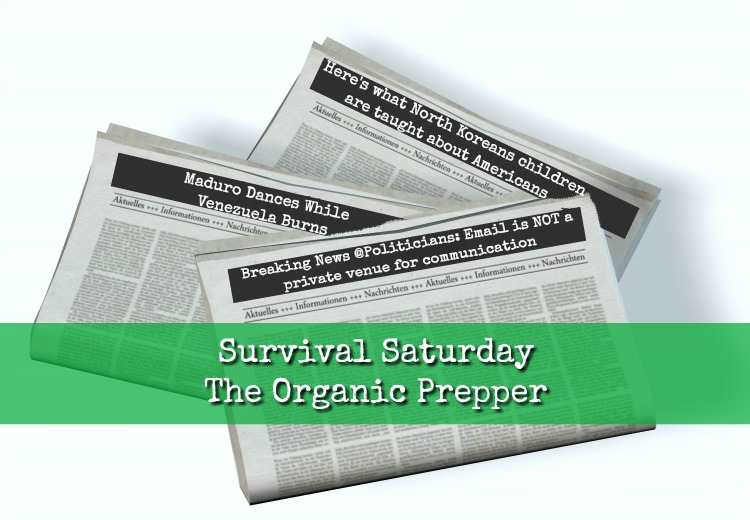 This week on Survival Saturday, we’ll take an international jaunt to France, North Korea, and Venezuela. World events are cyclical. The same things happen, over and over, in different parts of the world. Whether it’s the loud crash of socialism, rinse and repeat elections, or state-funded propaganda, if it’s happening elsewhere, it either happened here already or the trouble is on its way.

Breaking News @Politicians: Email is NOT a private venue for communication

It seems like the most commonly repeated word in  headlines in alternative news this year is “hack” or “dump.”  Who could forget the spectacular crack that appeared in the Democratic party when the DNC emails deriding and conspiring against crowd favorite, Bernie Sanders, appeared?  This was closely followed up by the emails of Hillary Clinton’s campaign manager, John Podesta. And then there were those emails that Hillary Clinton “lost.”  Hey, don’t worry, Hillary, Julian Assange found them for you. Even former CIA director John Brennan got dinged, and if anyone should know better, wouldn’t it be the CIA?

It appears that Emmanuel Macron, the candidate in the running to be the President of France, wasn’t paying attention because his En Marche campaign email was hacked. In a story that may sound somewhat familiar, Macron is seen as the forerunner in the election against a populist opponent. And, oh yeah – they think the Russians did it too. (source)

But French voters shouldn’t pay any attention to anything bad they might see because the bad stuff is probably fake.

“The En Marche! Movement has been the victim of a massive and co-ordinated hack this evening which has given rise to the diffusion on social media of various internal information,” the statement said.

The party said that the cache “includes both authentic and falsified documents with the goal of sowing doubt and disinformation,” which is another way of stating that anything that is potentialy damaging will be claimed to the fake, while the innocuous documents are “authentic.” (source)

Same story, different country. This all reminds me of that song we used to sing on the playground, Fried Ham, in which the same verse was repeated over and over in a variety of accents.

The situation is even worse in Venezuela, but the leader of the country, Nicholas Maduro, has been on TV dancing (5 times) and blithely denying that anything is wrong. And he actually created a mandate to force his countrymen to dance, too.

“During a national event last week, Maduro mandated that all Venezuelans dance as part of a political effort to construct a greater socialism. “The youth of the Revolution must know how to sing, love, and dance to construct a peaceful and happy Revolution,” he decreed. “We must all dance. Whoever does not know how needs to learn.” (source)

Meanwhile, here’s what has been going on with those people who should be dancing during the “peaceful and happy Revolution.”

Venezuela has been the poster child for anti-socialism, as farmers have had their harvests seized, electricity has been rationed, eggs cost $150 per dozen, and hospitals and stores have run out of the most basic supplies.

Meanwhile, in the US, some people have been urging unabashed socialist Bernie Sanders to start his own political party for months.

Here’s what North Korean children are taught about Americans

North Korean children are taught from kindergarten that America is evil. They are repeatedly told that Americans are terrifying villains who want nothing more than to kill all North Koreans.

This video is incredibly enlightening. In it, some young North Korean defectors are interviewed and asked about the school indoctrination. You really should watch it to behold the power of propaganda.

Now…see how easy it is to turn an entire generation against a group of people?

And doesn’t this make you think about what our public schools are doing?

Indoctrination is defined as “to force someone to accept a particular belief or set of beliefs and not allow them to consider any others.” This is particularly easy to do with children in a controlled atmosphere (like a school),

When you can see it from the outside like in the video above, it really makes you think.

Before I share articles, I want to talk about our upcoming courses over at Preppers University.

The thing that makes it so special is that you get to attend live webinars with your favorite survival experts, and not only that, we open the floor for a Q&A session with them. You can ask them anything you want about applying their advice to your own situation. Here’s part of our lineup this time around:

And that’s just a sample of our speakers and topics. What would you ask these experts?

To give you an idea about how the webinar work, here’s a link to a recorded webinar with Selco from the last Advanced session. It’s a dose of grim reality.

We offer two courses. Our original Prepping Intensive is an 8-week course with more than 20 live webinars, budget-friendly checklists, and downloadable guides. It will help you to create a preparedness plan that is unique to your family and your location. If you follow all the steps, you’ll be ready for nearly any short-term emergency by the end fo the 8 weeks. We have had hundreds of successful graduates who loved the course. Learn more about the Prepping Intensive here.

Our Advanced Prepping Intensive is a little different. This course lasts for 6 weeks and has a dozen webinars. In this course, we discuss what to do when the preps are gone. It focuses on DIY projects, bartering, raising food, and dealing with long-term, worst-case scenarios. It is only for people who have their basic preps in place. Learn more about it here.

The cost for this session is $139. After this one is over, the price will go up significantly due to higher administration and server costs. So get in now, while there’s still room. It really doesn’t look like things in America will be calming down anytime soon so you might as well be prepared for it.

Go HERE to register. I’ll see you in class. 🙂

Here are some articles about preparedness this week.

Get your homestead going: