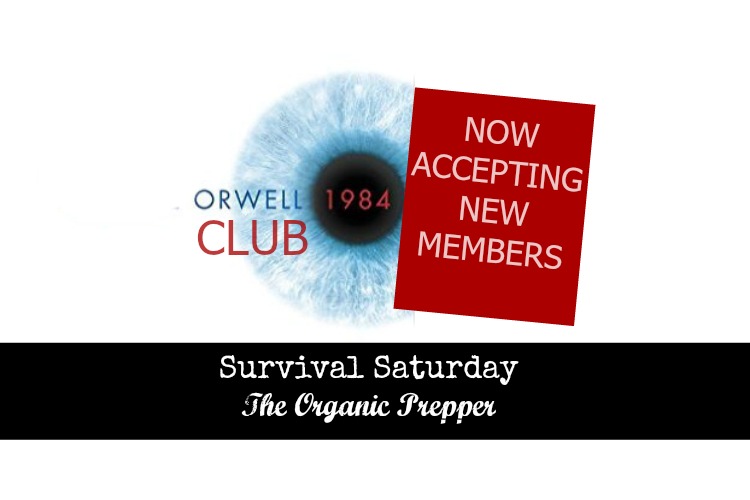 This week on Survival Saturday, I wanted to address the fact that here in America we really have a lot more in common than people think. Many of the concerns that the Left are experiencing now are the same ones expressed by those of us who were unhappy with the Obama administration.

Maybe – just maybe – we could all agree that the government in this country has far too much authority in our everyday lives. Maybe we could all agree that oppressive laws are a bad thing no matter who is making them.  While our ideal versions of America may be different, no one wants to be silenced or sidelined. No one wants their opinions crushed. And it is the ability for us to all express ourselves that allows for dialogue and balance – if we allow it.

Maybe we should look at the stuff we have in common instead of focusing on our differences. Then, united, we could see some real change.

Please think critically. No matter who you wanted in office, I urge you to look at each issue on its own merit and remove your personal politics from your assessment. Today, I’m writing about two administration-related topics – one of which I support and one of which I don’t. If we all could just look at the issues and ignore the partisan propaganda, perhaps we could make some real progress toward freedom.

Do you really think the FDA and USDA made your food safer?

A lot of people are up in arms because of a hiring freeze at the United States Department of Agriculture and the Food and Drug Administration. They’re horrified that he has also instituted a regulatory freeze on the ironically named Food Safety Modernization Act, a freeze that really just stops new laws from being added at this time.

They seem to think that these agencies actually have our best interests at heart with dramatic headlines like “Alarm: This is not a joke” and “Trump Bans Food Safety Scientists.”

Here are some facts of which you may not be aware if you are upset about this.

I can’t see any big loss there.

As for the Food Safety Modernization Act, it’s a tool of oppression that will make our food less safe and healthy. Here are a few of the things it covers:

Unless there is widespread industrial sabotage to prove a point (which *cough* Chipotle *cough* is not beyond the realm of possibility) this could actually mean safer food, as well as fewer regulations hampering small producers and traditional growers.

Watch as this would-be thief jabs a knife into the back of a cashier in a busy store, apparently ordering her to give him the money in her cash drawer. Of course, he didn’t expect the dude in the white shirt to be a CCW holder.

How many stories like this never get reported because no shots are fired? How many times do potential crimes turn into non-events because of the mere presence of a gun? These events don’t make it into the official statistics because the events never evolve.

Welcome to the 1984 Club, Liberals

We all know that America is currently more divided than it has been in centuries. But maybe the left and the right have more in common than they realize.

I get it. I don’t like that nonsense any more than they do.

But where were all of these hyperventilating book buyers back when President Obama signed the 2012 NDAA into law which legalized the use of propaganda? (Note that this was first reported by the late Michael Hastings, one of the last real investigative journalists in the mainstream, who, incidentally, met an untimely end.) The amendment to the NDAA repealed the Smith-Mundt Act of 1948, which prohibited using information and psychological operations to influence the opinions of Americans. (source) And what about the ridiculous Russian hacker plotline that was, according to cybersecurity expert John MacAfee, the “most deceptive propaganda to date.”

A lot of people on the right are mocking the liberals right now for acting, well, exactly as they acted while President Obama was in office.

This should tell us something greater is at play.

You know those pictures of a two-headed beast that represent Republicans and Democrats? They’re incredibly accurate. If you are really this worked up by “who” is in office but not by the issues themselves, then perhaps you are too reliant on the state. (Read this excellent essay.)

We have been manipulated by those in office for decades, if not centuries, and now we’ve become more divided than ever. But if you look at it closely, we’re all angry about the same things:

I definitely preferred Trump to Clinton, but let us all admit that the most recent presidential race was a lot like choosing which venereal disease we wanted, herpes or gonorrhea.

We have a lot more in common than people want to admit. Maybe we could work together and actually bring about positive change.

This week, my daughter and I made a luscious winter moisturizer that will make dry, cracked skin a thing of the past. And best of all, you only need three ingredients to make it. Get the directions here.

Want a time-saving recipe? Here’s how to make rotisserie-style chicken right in your crockpot.

Are you still prepping? Because you really need to be prepping.

Here are some questions to ask yourself this week:

The fastest way to build an emergency food supply (if you haven’t done so already) is by purchasing emergency food buckets. NuManna products are the only ones I buy because they’re non-GMO, have fewer toxic chemicals and preservatives, and taste great. You can check out the product line here.

Now is not the time to halt your preparedness efforts, no matter how happy you may (or may not) be that Trump is in office. (This is the reason a lot of people have reported taking a little break from prepping.) Our country is more volatile than it has been in decades due to political unrest. Regardless of the leadership, we’ve also reached a crisis point in the economy, with the most astronomical national debt in history. A crash will be impossible to prevent. Please get prepped, and if you need help, today is the last day to sign up for this session of the 8-week Prepping Intensive. (Go here to learn more about the course.)

Do you have any news links you want to share? Now’s the time! Please post your links in the comments below. Please join the discussion!