When the Culture of Glamorous Helplessness Meets Cold Reality 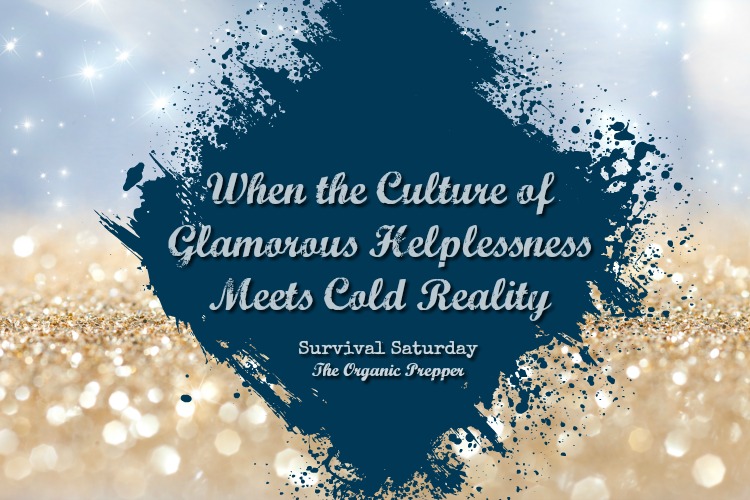 This week on Survival Saturday, we’ll discuss what happens when a culture that glamorizes helplessness meets cold, hard reality. It appears that many in the younger generation are completely flummoxed by difficulties, as you’ll see in the stories below. Generations ago, someone who was helpless was the object of scorn and derision, but now, we live in a culture in which things are much different. The lesson we can take from this is that when/if things go downhill in America, there will be a lot of entitled people who simply don’t know how to cope.

The good news is, there are some wonderful, self-reliant holdouts who aren’t headed in the same direction. Plus, check out a long-awaited interview with Ron Paul and Julian Assange.

Fyre Festival: Here’s what happened when rich people had to stay in refugee tents and eat cheese sandwiches

A bunch of well-to-do young people took off for a “luxury” concert on a tropical island…and it all went downhill from there.

A concert called the Fyre Festival was to take place this weekend in the Bahamas. A VIP pass to the concert cost a whopping quarter million dollars and a regular pass was about $4000. Guests were promised fancy digs  – they’d be glamping on the beach in geodesic domes.

But from the moment the wealthy concert-goers arrived, it wasn’t quite what they expected. First off, they ended up in what some people reported to be FEMA tents. I’m not sure if they’re FEMA but I probably wouldn’t classify the photos below as “modern, eco-friendly, geodesic domes.”

Stuck at #fyrefestival trying to leave for the last 8 hours. barley any food or water or security or electricity pic.twitter.com/jHPMnJw5gx

The fare was also less than decadent.

Here's the dinner they fed us tonight. Literally slices of bread, cheese, and salad with no dressing. #fyrefraud #fyrefestival #dumpsterfyre pic.twitter.com/NmNXakSFlq

One must wonder – did all these kids get punked? Was this a grand social experiment? Or were the organizers really this…well, disorganized?

Anyway, on to the lesson we can all learn from this. These people completely lost their marbles after just a few hours of this.

They were calling upon the Embassy for help. They were sending desperate messages as their phones died. They were fighting for those cheese sandwiches and undressed salads. And this was on the very first day.

This is legit how most horror movies start off. #FyreFestival pic.twitter.com/1xgzlXjjDd

I bet those kids wish they had read my article about preps for plane rides, huh?  For more of these tweets, check the hashtags #FyreFraud and #FyreFestival on Twitter.

The moral of the story is how fast it all devolved. Within 24 hours it was absolute chaos. Do you think it would be any more gracious if things went sideways in such a huge way in America? If you do, I invite you to check out one of my Black Friday round-up posts. This rapid devolution is why I recommend that you…

The organizers of the event have promised refunds, charitable donations, and VIP passes for 2018’s …umm…concert.

On a Related Note, Survey Shows That 1 in 5 Adults Are Seriously Lacking in Life Skills

Do you ever meet someone and wonder, “How the heck does this person get through life?”

Well, according to a new study in the UK, you may need to ask that of 20% of the people you meet. The study divulged that many adults between 24-35 who still live at home don’t have even the most basic of life skills. For example:

Imagine how poorly they’d fare during a long-term power outage or being stranded in their cars during a blizzard. I don’t know about yours, but my kids have been doing these things (and many other basic skills) since they were about 8-10 years old.

Thankfully, Not All Millennials Are Irresponsible and Helpless

In fact, some of them are great. This article by Charles Hugh Smith focuses on a bunch of young people who are savvy, responsible, and self-reliant.

Many are homesteading, buying affordable homes and building communities that get stuff done.

I discuss these trends with Drew Sample, who is living them in Ohio. ( hear a 60-second excerpt or listen to the full podcast on Drew’s site.)
This arrangement is win-win: the family member earns a much higher return on the cash than a savings account or equivalent, the loan is secured by the property, and Drew cuts out the bank/lender.Although the mainstream media focuses on bubble-priced Left and Right coast homes costing hundreds of thousands of dollars, there are perfectly serviceable houses that can be had for $50,000 or less elsewhere in America. Drew just bought one, and rather than go through a bank for the mortgage, he arranged (with the help of a real estate attorney) for a family member to put up the mortgage.
It may surprise those who only read media accounts of Millennials living in their parents’ basement playing videogames, many of the Millennials in Drew’s “tribe” are growing food via homesteading.

The article goes on to discuss how self-reliance is becoming a global trend. It really gives you some hope for the next generation – check it out here.

As anyone who is a regular reader here is aware, I’ve long been a fan of Julian Assange, the founder of Wikileaks. In fact, I’d go so far as to say that Assange is the reason that we aren’t dealing with another President Clinton right now. I was disgusted to learn that President Trump, who owes his office to the unsavory revelations about the Democrats by Wikileaks, has flip-flopped from thinking they’re great to trying to have Assange “brought to justice.”

In an essay on his website headlined “, Dr. Ron Paul said that Trump is declaring “war on the truth.” Paul has been a long-time supporter of libertarian principles and free speech.

In the fantastic interview below, two friends of liberty discuss the state of the world, free speech, and Trump’s pending charges of espionage against Assange.

We arrived at our new home last weekend and have been spending the week getting the house organized before our things arrive on Tuesday. I’ve got my garden planned out and am figuring out my urban chicken solution. Lots of photos will be forthcoming.

Here are some preparedness articles that you may find of interest:

Here are some of the articles I found the most thought-provoking this week.