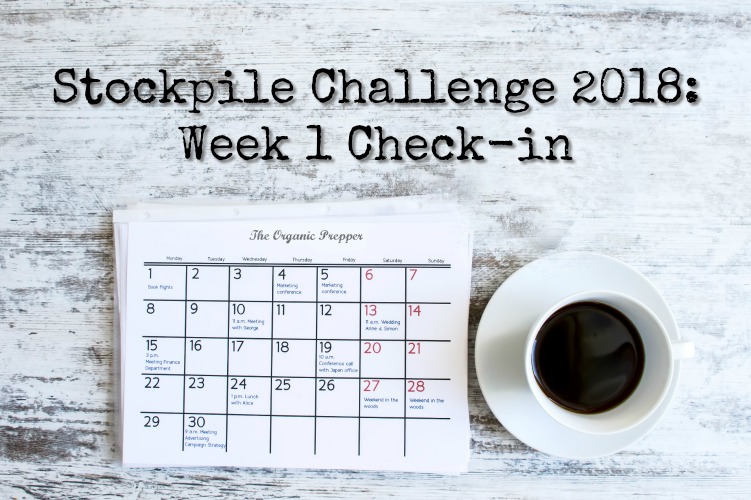 For this week’s check-in, I want to dispel some myths about the challenge and share with you some of the observations people have made.

Here are a few things I addressed in the Facebook group but figured that people not in the group would also want to read.

If it’s not difficult, that is a GOOD thing.

I noticed that some people had said they were feeling almost guilty because the challenge has been too easy so far.

That the things they’re eating are “normal.”

And I say this is a very, very good thing. First of all, you’re eating without your regular grocery trip and you’re happy with what you have put aside. That rocks!

But secondly, and most importantly, the number one reason we end up using our preps is a financial difficulty.

Here’s a personal example. About 10 years ago, I got laid off. As a single mom with a mortgage, this was terrifying. I knew I’d be employed again within 6 months, but I would be going that amount of time on only 60% of my wages (with unemployment insurance payouts.

So, for 4 months, I spent every dime of my unemployment pay on my mortgage, my utilities, and insurance. I didn’t have to spend money at the grocery store at all. Why? Because I had a chest freezer that was loaded with food. I had shelves laden with canned goods and dry foods. I had toilet paper, sanitary products, shampoo, toothpaste. We were absolutely fine, kept our home and our car, and had no needs unfulfilled.

All because I had a stockpile.

So, you’re doing everything right. Stop worrying. Often, when SHTF hits you, all of your utilities work just fine. Not always, of course. But that’s the most common scene.

Eating the things that are going to go bad first is ideal, not a cop-out. In a real emergency, you should prioritize what you eat by how quickly it will spoil. This way, there is less waste.

Those of you who ate like you usually do this week did everything right.

People who had to purchase something felt like they had failed.

Not one single person has “FAILED” at the Stockpile Challenge.

I’ve seen a few people say this in comments or the challenge thread but it’s totally wrong, and here’s why.

— Did you have to buy something? Then you learned about a hole in your preps. You can now take steps to fill that hole.

— Did you run out of something that is essential? Now you know that you haven’t put back enough of it.

— Was there a supply you never even thought about stocking up on until you realized you didn’t have it? You wouldn’t have known if you hadn’t started out on this challenge.

We’re all at different places on this journey.

Sure, there are some folks who are going to sail through this month without even breaking a sweat and I commend them all.

But I bet even they will learn of a few things that would make life more pleasant after a period of time.

There are people who thought they’d be fine but ended up going to the store right in the first week. I’m one of those people and I’m running the darned challenge. I started coming down with a kidney infection on the second day and decided to go buy some pure cranberry juice so that I didn’t end up having to go to the doctor and get on antibiotics. And you know what? I grabbed 8 bottles of it while I was there because obviously, this is something I want to have on hand.

Every challenge we run into teaches us if we’re willing to learn from it. And that is the point of this exercise.

If you don’t make it completely on your stockpile, don’t worry one little bit. This isn’t failure. It’s education.

You are learning things you would never have if you hadn’t embarked on this challenge. We are ALL learning from one another.

Some are worried that they’re depleting their inventory and something bad is going to happen.

There is absolutely no rule against replenishing your stockpile as you use it up. I personally just placed a big freeze-dried fruit and veggie order because I realized I didn’t have as much on hand as I wanted. Just tuck away the new items you buy and you’re still adhering to the challenge.

Here’s what people are learning

When I asked folks in the Prep Club group what they had learned, here are a few of the lessons they’ve picked up – and we’re just on Week 1 of the challenge!

Most people are running out of the same things.

The most common items mentioned are:

Solutions for these are:

Did you participate in the Stockpile Challenge?

Let us know in the comments what you learned. If you have run into any stumbling blocks, share those and maybe we can make suggestions to help you.

If you’re on Facebook and haven’t joined Prep Club, go here. Be sure to answer the questions so that we let you in!